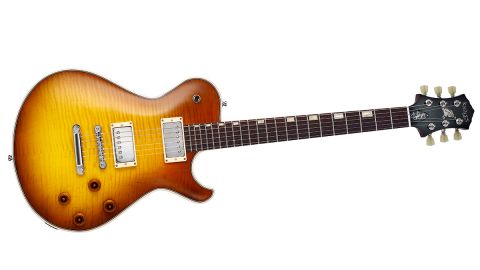 There's nothing that rewrites the rulebook here: it's just great, classic vintage-informed guitar-making for those collectors and players who are lucky enough to have the funds.

Ever since the Gibson Les Paul debuted in the early 50s, it has been used by guitar makers large and small as one of the reference points for the electric guitar.

Many, of course, have just copied it lock, stock and tuner post. Others have used it as a recipe, added their own tweaks and flavours and created a not-exactly-new tasting dish but one that is subtly different to the original.

During his 20-something-year tenure at PRS Guitars, luthier Joe Knaggs had his hands very much in one of the most controversial 'Les Paul-a-likes' in recent times: the PRS Singlecut, which, on release in 2000, incensed Gibson enough to take serious legal action. He left PRS to set up his own venture in 2009, and with Knaggs Guitars unleashed a plethora of new designs, both electric and acoustic.

Along the way, picked up a lot of fans and pro players, not least Steve Stevens whose two limited-edition signature guitars gave Knaggs some well-earned exposure. Now, we have the more mainstream non-limited SSC (aka the Steve Stevens Classic).

Based on Joe Knaggs' original Kenai shape, the SSC is slightly different in outline. "The SS1 was different, too," confirms Joe from his HQ in Greensboro, Maryland. "The SSC is actually the same shape as the SS2. The Kenai's lower bout is wider; the SSC is a little more of a rounded guitar. A bit more like a snowman! It is thicker in depth, but the Kenai is actually carved on the back, a bit more tapered - the SSC is the same thickness as the base of the Kenai but flat. So, yes, the SSC has more mass [than the previous shapes]. It was Steve's suggestion, like the neck shape."

Whatever the subtle differences, the SSC is clearly Stevens' and Knaggs' take on that Gibson and, by design, is made more classic here with a standard Tone Pros bridge/tailpiece setup rather than the 'Influence' bridge design, used on the Kenai and the SS1, which links the two parts.

Though far from a copy or clone, there's something timeless about this design. It's certainly less modernistic than his previous employers' Singlecut, evident in the more classic look of the three-a-side headstock, the almost pulled out Telecaster-like upper body, and the distinctive hook-tipped horn.

The body has a maximum depth of just over 56mm and is backed with a one-piece slab of mahogany, with just a light rib-cage chamfer. The very fine and understated pin-striped flame to the maple top is quite stunning, especially in this classic 'burst. There's a slight flatness to the centre of the carve that holds the pickups and the hardware and then slopes away in classic violin-style to the thick cream plastic edge binding with its inner black/white/ black purfling.

The top-carve, of course, results in quite a raked back neck angle, which is steeper than you'd find from his previous employers. Likewise, the headstock seems pretty close - if not slightly more angled - than Gibson's classic 17-degree pitch.

The head's length is reduced, approximately 160mm long, some 15mm shorter than Gibson from behind the bone nut to the tip of the ebony-faced head, which even manages to make that ray gun inlay, Knaggs logo and Stevens' squiggle signature truss rod cover look quite classic.

There's a slightly pointed 'bow' to the heel and the full width of the neck fits into the body, resulting in quite a chunky heel compared with some modern takes on the style but it really suits.

And 'chunky' certainly describes the neck itself - one-piece mahogany with a deep D profile that measures 22.6mm at the 1st fret and 25.6mm at the 12th. It actually feels slightly asymmetric with a subtly steeper curve on the bass side and slightly more relaxed on the trebleside.

The wire is classic medium gauge (approximately 2.5mm wide by 1.05mm high); even the offset pearl blocks look slightly yellowed on the medium brown 'board, unbound with nicely rounded edges. No Knaggs neck we've played has disappointed, and this model is no exception.

Pickups of choice are from Bare Knuckle, as founder Tim Mills explains: "Steve wanted PAF-voiced 'buckers for his signature series rather than his own signature 'Rebel Yell' pickups, because he wanted to make the guitar as versatile as possible and appeal to the widest rangeof players possible.

"He felt vintage output humbuckers would be the best choice for this, offering the best in dynamics and tone. They are modelled on our Mule humbucker, powered by Alnico IV, and again Steve felt fully potted was the most viable option making the guitar suitable for all gain ranges. The humbuckers are made with 100 per cent vintage-correct parts that we make ourselves - Butyrate bobbins, nickel silver baseplate and covers, coils wound by hand with 42 AWG plain enamel and all fully hand-assembled."

While many guitars of this type seem to offer a pronounced midrange ring, seemingly devoid of cohesion with the body, a quick unplugged open chord here reveals a beautiful acoustic ring that sustains for the proverbial days, and notes pick up with the slightest finger pressure. With any thought to process thrown to the wind, we plugged in and were totally absorbed. For hours.

Now, any guitar at this price should be good, exceptional even, but there will be few players who don't get this one.

The neck profile certainly won't suit everyone, but its girth and fatness ticks our box. It might be big but the shaping is superb. Likewise, the effortless playability balances fight with fluidity.

Did we tune up? Well, yes, but the stability of the guitar is absolutely first class, so much so that we completely forgot to pass comment on the tuners. It's a perfect weight for its style, too, substantial and beautifully balanced on the strap - it just disappears.

Kicking off in a classic rock Marshall sphere, there's balls and power without sounding choked or glutinously thick. With volume and tone full up on the bridge pickup there's no lack of highs, but they're far from ear-wearing, and are sparkling and textured.

Pull the volume back and the highs diminish a little (there are no treble bleed caps here); pull the tone back and we have a chewier, more muted voice that sounds bluesy and almost three- dimensional with a solo boost.

There's a bite and liveliness from the pickups that leans into easy-to-control feedback. Pull the volume back but keep the tone up and there's beautiful alt-rock jangle at the bridge, serious thunk and funk in mixed position, and an almost single coil-y neck voice that, with the volume whipped back up and the tone rolled off a little, is archetypal blues ballad solo with a sustain that seems effortless.

Compared with the price you'd pay for the real thing, or even a modern replica, with the quality of feel and sound we're experiencing here, we'd suggest this guitar is under-priced.

With a few single-cuts lined up as reference, including Gibson and PRS, it's the mark of a great guitar when those top-dollar instruments are left unplayed, isn't it? Vintage or personal value aside, we'd trade them in in a heartbeat to own this unpretentious Knaggs SSC.

Forgetting the build, it's all about the tremendous neck feel and quite simply the sound - unquestionably one of the most musical and vintage-like models we've had the pleasure to play.