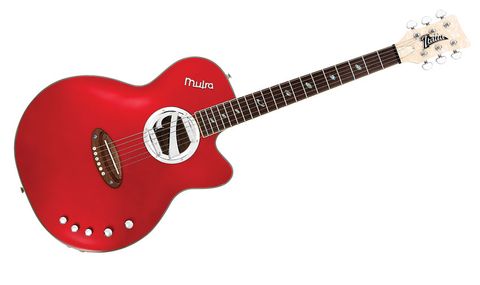 It might not be the greatest acoustic guitar you've ever got your hands on, but it's certainly got plenty of spark where it counts.

Much like the other Italias to have passed through our doors recently, the Muira is something of a strange proposition. A glitzed-up electro-acoustic with a pair of single-coil pickups mounted on a flashy chrome soundhole cover, it's a world away from pretty much every other electro on the market.

Stylistically, the Muira is perhaps the most reminiscent of an early-60s oddity. A slightly arched top covered in controls (master volume for the soundhole pickups, plus a volume and three-band EQ for the piezo, since you ask), clad in pearloid back and front with deliciously vintage-styled binding, it's perhaps the least acoustic-like acoustic you're likely to find.

It's as a pure acoustic that the Muira performs poorest, though, lacking much in the way of projection or depth and sounding a bit boxy. That said, throw it through an amp and you have lots more going on, with access to the piezo and soundhole pickups.

We found that the most fun to be had was in treating the Muira as an oddball semi-acoustic rather than a functioning electro. Once you drop any notion of getting a proper 'acoustic' sound out of it and just enjoy yourself, there's much fun to be had. The size and shape of it means that it tucks neatly into the body, and the comfortable neck and upper-fret access make it a thoroughly engaging little rocker.