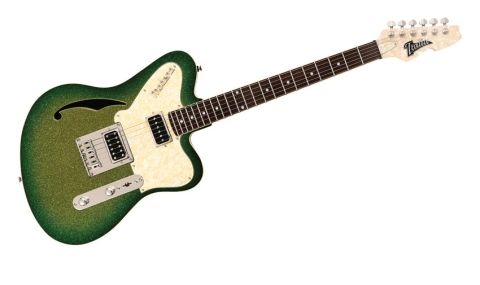 If you're into the aesthetics, the Modena Semitone is worth more than a look.

Coming on like the wild distant cousin of a Thinline Tele, the Modena Semitone is straight out of Italia's top drawer of eye-catching glam-rock monsters.

Finished in sparkly Metallic Green, with a thick pearloid wrap covering the back of the body, the neck and the headstock (a weirdly appealing affectation that's grown on us more every time we've played it), there's character by the bucketful here.

There are also some highly useful Trev Wilkinson flourishes, including that Tele-styled bridge and controls. There's plenty of weight here, something the chamber lurking behind that curvy f-hole does little to lessen, but we're willing to forgive a bit extra on the scales for sheer vibe factor alone.

The alder body resonates sweetly unplugged - helped along, no doubt, by the through-body stringing - and balances beautifully in seated or standing positions. It's well built and finished, and feels rugged.

In tonal terms, there's plenty of retro bite in those Italia pickups, with effectively a P-90-a-like at the neck and a humbucker at the bridge. The Modena Semitone is most at home with a bit of good old-fashioned rock; its big frets are well suited to huge bends and that chunky neck begs to have classic riffs wrangled out of it.

The looks won't be for everyone, but it takes a real guitarist to rock green sparkles, and it's highly unlikely that you'll be forgotten...