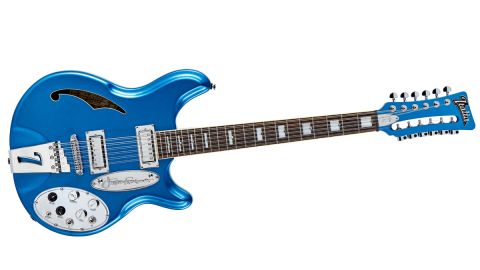 Like any electric 12-string, the JF12 is at its best with loads of compression. Lay it on thick and you'll want to pick it back up and do it again.

To put you out of your misery, Jeffrey Foskett is a session singer and guitarist who has played with Brian Wilson and The Beach Boys since the 1980s.

Offered a signature model by UK designer Trev Wilkinson's Italia firm, Jeff thought wouldn't it be nice to have a guitar with "the jangle of McGuinn's and the smoothness of Carl Wilson's tone". That explains a lot.

Roger McGuinn of The Byrds jingle-jangled on a Rickenbacker 370/12. Late Beach Boy Carl Wilson played a 360/6. Well, Jeffrey's new signature 12-string is based around Italia's existing Rimini model (priced from £769), which in turn draws heavily on the beauty of the Rickenbacker 360.

Like the regular Rimini 12-string, the JF12's body is formed from chambered alder shell sealed with a flat ash back and some binding. The body has the 360/12-influenced rounded sides with additional 'German' carving and a soundhole that's half traditional 'f ', half Ricky 'cats-eye'.

Hardware consists of an anchored Wilkinson VS50K-2 tune-o-matic-style bridge (with individual intonation adjustment for all 12 strings) and a big tailpiece that's securely screwed into both the butt end and top of the guitar.

So far, this feels like a Rimini with a Cobalt Blue paint job, that is until you eyeball those oval chrome plates. The big one carries the controls with etched names to tell you what's what, like you'd see on a 60s Vox Phantom.

You get a master volume, master tone and blend control, each topped with Gretsch Duo Jet look-a-like knobs, a big Danelectro-style on/off switch for each pickup, and a mini toggle on/off for the active 'FosQ' enhancer circuitry with its Jangle and Boost functions. There's a spring-loaded nine-volt battery holder on the back of the JF12 to power the active stuff. More on that in a bit.

The other oval plate carries Jeff's name and, frankly, looks like it was pinched off his front door. The plate otherwise plays host to a pair of green LEDs that burn bright when you engage the JF12's mini-humbuckers, one for the neck 'bucker, the other for the bridge.

The 635mm (25-inch) scale hard rock maple neck is glued in place and carries a 356mm (14-inch) radius rosewood 'board, 22 medium frets and Art Deco vibe dot and block inlays. While the headstock isn't the compact work of genius cherished by Rickenbacker 360/12 addicts, we like the JF12's retro half-slotted look. We also appreciate that the treble side tuners are angled for easy reach.

The JF12's slim 'D' profile neck and low action make this an easy guitar to get to know. The fingerboard and string spacing are a little wider than you'll find on a Ricky - and while there's not much in it, some may find the JF12 easier to handle.

You can switch each pickup on individually with their assigned two-way toggles, or leave both 'buckers on and sweep between them for a wider spread of tones. In the FosQ section, the boost knob gives a decent injection of grunt, enough to push our amp into light overdrive, while the jangle control adds a bit of top-end sizzle.

The mini humbuckers are pitched perfectly for this guitar. The bridge unit is bright but never shrill, and we like the effect the jangle control has on it. It's almost like the chime of an organ and rotating speaker - it sounds very 1960s.

The neck 'bucker offers a deep twang that sounds great for bottom- string riffs and jazzy Johnny Marr-style chords. Like any electric 12-string, the JF12 is at its best with loads of compression. Lay it on thick and when you stop playing this guitar you'll want to pick it back up and do it again.

At £999, the JF12 sits between a Danelectro DC52-12 (£499) and a Rickenbacker 360/12, with the latter's street price at around two grand. While many of us would love to get our hands on the Ricky, the excellent build quality, playability and those neat tonal tweaks more than justify the price tag of Jeff's guitar and make it a very acceptable alternative. And you get a well-padded gigbag included. Seriously, the only beef we have is with its big chrome name-plate. God only knows why that was flagged up as a good idea...