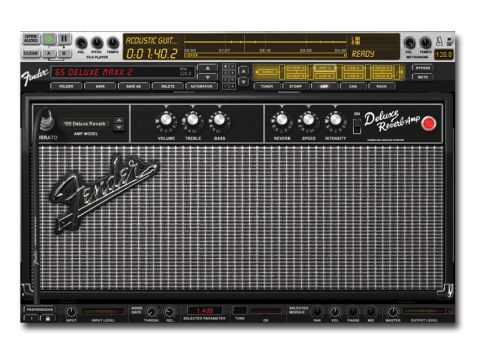 IK Multimedia has done the Fender name proud by producing the best-sounding AmpliTube to date.

IK Multimedia's AmpliTube is one of the most acclaimed software amp simulators on the market. It's been rolled out in various forms, including AmpliTube 2, Jimi Hendrix, Ampeg SVX, Metal and now the officially endorsed Fender version.

All bear the 'Powered by AmpliTube' legend, and between them they cover an impressive 38 amps, 45 cabinets, 57 pedals and 30 rack effects.

You can choose from a number of preset routing configurations, to create, for example, dual amp setups. The standalone version also includes the rather useful SpeedTrainer audio player, which enables you to slow down tracks to aid in learning parts.

As the name implies, AmpliTube Fender only emulates Fender guitar gear. With such headline amps as Twin Reverb and Vibro-King in the pack, this is patently obvious, but the rack effects (Pitch Shift, Tape Echo, Sine Flange, Triangle Chorus, Wah and Compressor) are sourced from Fender's more recent Cyber-Twin amp, while the pedals (Blender, Phaser, Fuzz Wah, Tape Echo, Volume and '63 Reverb) are from throughout the company's history.

There are cabinets to match their respective amps (although you can mix and match) and, with the exception of the Bassman 300 and Metalhead, these are all combos. Mic emulations vary from the commonplace SM57 and U87 to the more unusual Beyer M160 ribbon and Sennheiser MD441. On- and off-axis settings and near and far positioning allow for plenty of sonic variety from the mic options alone.

IK is keen to point out that AmpliTube Fender is its most accurately modelled package to date, citing extensive use of their Dynamic Saturation Modelling (DSM) and the recreation of each and every stage of the amps and effects. The company has also developed something called Volumetric Response Modelling (VRM), which has enabled it to capture the sound of the Vibratone Rotary Speaker.

Of course, Fender has approved the sounds of the package, too. You'll also find options for activating oversampling for pedals or amps and a high-resolution mode - inevitably, these carry an accompanying CPU hit.

Clearly, AmpliTube Fender's big draw is its amp emulations. Half of these stem from Fender's rock 'n' roll hey-day and include the '59 Bassman LTD, '57 Deluxe, '64 Vibroverb Custom and '65 Deluxe Reverb, as well as the '65 Twin Reverb and Vibro-King Custom already mentioned.

So, if you're after the full-scale classic valve-driven sound to couple with a Strat or Tele, you've got six great choices in the older units. The other models offer broader capabilities, such as bass-specific amps. The Bassman 300 is a modern rig with graphic EQ and compression, while the TBP-1 offers a classic tube preamp with modern overdrive and EQ.

For a more contained, 'studio' sound for electric guitar, you've got the Pro Junior and Champion 600 amps, while metal maniacs should try the MH-500 Metalhead rig, which has a solid-state power amp.

Finally, Fender's recent Super-Sonic valve amp gets a look-in, although only the Burn channel is included (the Vintage channel is absent).

Just dropping the plug-in onto pre-recorded guitars in a mix revealed plenty of recognisable Fender tones, from the thickness of the Bassman to the direct, punchy sound of the Champion 600 and on through the rich, creamy Twin Reverb.

Purely in amp terms, you're spoilt for choice, and while the pedal effects aren't very extensive, at least they're all good.

The fun really started for us when we used AmpliTube Fender in real time with a Stratocaster - it successfully sculpted that potentially weedy Strat tone into all manner of rich, solid and distinctive sounds.

Our favourite amp is definitely the '57 Deluxe, but each model offers something slightly different. Overall, the Metalhead impressed us the least, but by contrast, the recent Super-Sonic is brilliant.

Much like the pedals, the rack effects are only really the icing on the cake, but they're useful for certain effects, such as chorus and flanging. It is frustrating, though, that the effects are rigidly divided into pedal and rack categories - since there's no compression pedal, we'd love to be able to place the Compressor rack before the amps, but you just can't do it.

And you still can't reorder the effects, either, though if you use X-Gear (a free download for registered users) you can combine elements from different AmpliTube products to create monster rigs.

X-Gear lets you access presets for individual elements (amp, cab, pedal, rack) as well as the full rig presets, and they're all categorised by product (Jimi Hendrix, Metal, Fender, etc). There are also presets that combine modules from multiple AmpliTube titles, although you'll need to own the particular editions used in a patch to load them up.

X-Gear offers the same automation system as the regular AmpliTube: each module parameter (ie, knobs and switches of pedals/amps/effects) can be assigned to one of 16 host automation parameters.

There's also a MIDI implementation that's exclusive to X-Gear, but it only gives access to controls for preset next/ previous, stomp bypass, and volume/ wah/Wharmonator. This is pretty lacking compared to some of the competition, such as Overloud TH1, which lets you control almost any combination of parameters via MIDI CCs, and jump to specific patches.

Gripes aside, AmpliTube Fender is IK's most convincing amp sim product to date, and it can produce so many new and old tones that you really are spoilt for choice.

On the downside, CPU usage can be considerable, particularly with the high resolution and oversampling modes activated. But all told, we're enormously impressed by this package, as all it's really lacking when compared to the real thing is that physical guitar-amp-player interaction.