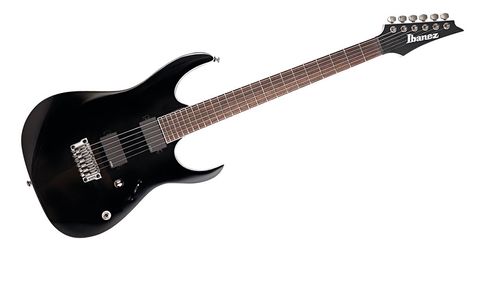 The perfect example of a no-fuss shred machine that lets you impress your personality on the guitar, rather than the other way around.

The Ibanez RG series has always been a favourite guitar of metal players, and for obvious reasons. As the archetypal double-cut, it came fresh out the box with everything shredders needed: emaciated maple necks, double-locking vibrato units and hot pickups. The RG was built for speed and could deliver a riff.

But with the Iron Label series, Ibanez has called an EGM of the R&D department to build a range of mid-price electrics in six-, seven- and eight-string models that are strictly metal - not for the jazz guy who cuts loose on the fusion come the middle-eight, or the hair-rock power-ballad wuss.

But to create a monster, you've got to venture off-piste, and here Ibanez has ditched the master tone, leaving just a three-way toggle switch and an on-off kill switch for those weird manual slicer effects (Ibanez calls it a "strobe effect") that Randy Rhoads was so fond of. The result is a series of guitars that embrace minimalism and brutal tone in equal measure.

The Iron Label series is not aimed at the super-rich, so it makes sense that Ibanez should just pack in the essentials in order to price its guitars accordingly. Maybe this has helped the company develop a guitar that avoids many of the heinous aesthetic crimes involved in making a metal guitar.

There are no god-awful pearloid skulls, no abalone - just a black finish, white binding, and an unmarked rosewood fretboard. It looks great and, examining the spec, there is no way this guitar will fail you.

A pairing of active EMG 81/60 humbuckers in bridge and neck respectively (think classic Hetfield) is a guarantor of big tone, and this Iron Label RG is a guitar whose voice excels when the gain is cranked and the distortion pedal is maxed out.

In the bridge position, the EMG 81 ensures muted powerchords chug, harmonics sing, and note articulation is excellent. The EMG 60 in the neck offers a similarly robust and high-output performance, albeit with a less intense but thicker tone, which excels when you roll the gain back.

Of the three guitars in the new series, the six-string is best equipped to do subtle cleans, and is the most playable. The kill switch works fine, but unless your style calls for it, then, well, it's a gimmick.