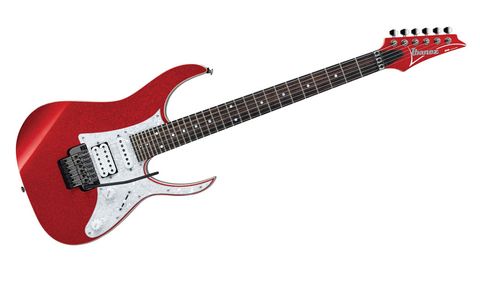 The RG550XH is a neat twist on the shred axe, but unforgiving for big, fat sausage fingers. Tommy Tedesco might not approve, but we do.

Most people say that it was renowned session player Tommy Tedesco who was the first to caution that there is no money above the 5th fret. Now, advice from any man who recorded with Chet Baker and played on the Enter The Dragon soundtrack should be obeyed, but Tommy was speaking in a more innocent era - one where guitars such as the RG550XH didn't exist.

Nowadays, the shred dollar just keeps on appreciating; the mean level of lead-guitar skills among the rock and metal set has never been higher, and in turn, players with such prodigious command of the fretboard need an instrument to showcase their skills. Enter the RG...

Ibanez's RG series was built for the shred-obsessed: skinny Wizard necks with 24 jumbo frets, hot pickup configurations and, of course, locking vibrato units - presently being rolled out with the super-stable and user-friendly Zero Point System, allowing players to make adjustments with a thumb-screw rather than an Allen key. All were a boon to players looking to add a bit of speed to their game.

The RG550XH takes it to another level: it has 30 frets. Even presuming Ibanez has digested the feedback from focus groups and the 'extending the fretboard' idea tested well, this is still the big talking point. It's contentious. It would be interesting to have a fret-o-meter chart how often we S-type owners visit the 24th fret, let alone wish for any above that.

There is an exaggerated lower cutaway, differentiating it from its RG kin, yet aside from the fretboard, the RG550XH is reassuringly familiar. Anyone who has picked up a mid-range Ibanez over the past few years will recognise all of its desirable appointments.

The RG550XH has the incredible Edge-Zero II locking vibrato unit that stays true under the most punishing abuse. With a slim 19mm (0.75-inch) depth at the 1st fret and a fairly flat 400mm (15.75-inch) fingerboard radius, the Wizard neck is a well-known speedster, satin-smooth with a profile that is pure Ibanez.

All that, and it comes equipped with an Infinity humbucker. Rolled out by Ibanez in 1994, the Infinity has a big ceramic magnet, and is hot but not overly so, making the RG550XH a superlative performer for classic high-gain rock playing, and capable of but not restricted to metal tone. Indeed, with the gain rolled back a little, the RG550XH has plenty of smooth blues and snappy crunch.

Yes, there's so much fretboard that the extra six frets put the kibosh on a neck humbucker, but the battery-powered active neck pickup simulator does a passable impersonation, taking some of the sting off the bridge 'bucker's bright treble response. With the five-way switch, there is still plenty of range on offer, with little appreciable difference to an RG with a HSH pickup configuration.

Whether you go for the RG550XH, with its slightly weird body profile and seemingly endless fretboard, depends on whether you are subtle enough to accurately blitz those notes at the teeny-weeny summit of the fretboard.