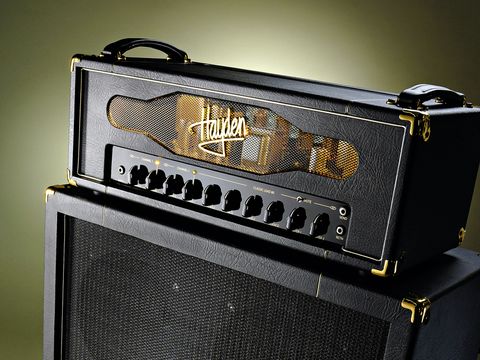 Quality build, great tone and price sends this to the top of the must-try rock amp list.

Goodness knows life is full of little mysteries. Why is bra singular, but pants plural; why do ladies pack 20 of both to go away for five days, and most importantly, why can't every amp company just make a blissfully simple, great-sounding rock head?

Indeed, it seems that whether it's smalls or circuits, the more stuff you cram in the case, the less likely everything will get used, and the more it'll end up costing you. You see where this is going…

Hayden's new Classic Lead 80 takes the less-is-more approach, offering what it regards as the minimum requirement for a hard rock head: two straight-up master volume channels - with no 'superfluous gimmicks', as the company puts it - a powerful EQ section and an effects loop: no more, no less. Hand-wired in England, it's pointing a boastful barrel straight at Marshall - how is Hayden's aim?

The Classic Lead 80 sits at the top of Hayden's UK Hand Wired series. Ex-Matamp man Dave Green is on board full time in the design department, having clocked up an eight-year relationship with Hayden and its forebear Ashdown. Given the Hand Wired tag, it's slightly surprising to see everything mounted on PCBs - albeit hand-wired PCBs - in the Classic Lead 80.

That said, by using high quality through-plated boards, minimum two-watt resistors, polypropylene caps and other quality parts, it's a step above the common, mass-produced, mid-priced PCB valve amps from the likes of Marshall, Peavey and indeed Hayden's own Peacemaker. And just in case you were in any doubt as to whether it's still a boutique amp at heart, a white light illuminates everything behind the front grille when you turn it on: classy.

The circuit begins, like so many modern rock amps, with the spirit of seventies modded Marshalls. Thus we get a 4 x EL34 power section putting out 80 watts. Why 80? Well, according to Hayden it offers all the good stuff from a 100-watt EL34 design, particularly the low-end response, with some of the sag and saturation you'd associate with a 50-watter.

"You can get 200 watts out of four EL34s if you want," laughs Dave Green, "but you'd need about 800 volts [plate voltage] and it'd be class B. Most amps will run about 500 volts for 100 watts in class AB, but I chose 80, which is around 475 volts. That's because a lot of people think that a 50-watt Marshall is not enough, but a 100-watt is too much. I also think that four valves gives a smoother distortion than two and you get more room in the distortion area; more headroom."

Also unusual for an amp of this kind is the fact that there's no negative feedback loop (a bit of electronic design that keeps amps slightly more stable with less noise), which usually equates to a quicker, more visceral and dynamic response.

The front end is made up of two channels; the first does crunch tones and beyond by having three continuously variable gain stages off the single gain pot. The second is slightly hotter and fatter in that it runs one stage flat out all the time.

In truth there's more than enough distortion in the first channel alone for classic seventies and eighties rock: this is not an amp for crystal clean tones. The channels both feature Hayden's 'shade' control - a six-position rotary control that fattens the tone the more you turn it anticlockwise.

It's a useful instant route to matching the amp to your guitar's general tonal response, and can also be useful for adding fatness at low volumes, or getting rid of mud at gig volumes. "It's a bit like Gibson's Varitone," explains Green. "Matchless has used it, Matamp uses it; it's a pre-shape that varies EQ and gain to cut out the bass."

After that you have a simple gain and master volume control for each channel. Below halfway on the gain controls are where the clean-ish to crunchy sounds are, while after halfway brings in extra gain stages for progressively more thick, harmonic distortion.

The EQ controls comprise bass, middle and treble and they're powerful throughout their entire range. "It's a totally passive circuit," says Green to our surprise, though he's unwilling to divulge full details. "It's all about how it's driven that makes it actually work," is the hint to what's going on.

Finally, on a practical level, the two top-mounted handles are useful - it's a heavy beast - but they shouldn't be at the expense of a single, middle handle too: you have no option but to use two hands, which is a pain in the butt when it comes to things like opening doors, locking cars, smoking fags and other gig-night essentials.

More subjectively, the Hayden logo has met with some disapproval around these parts. Horses for courses, but the consensus is that it lacks the necessary gravitas for the front of a pro rock amp. The jury is out, but the case is far from trivial.

Hear Guitarist's Simon Bradley put the amp through its paces in the following audio demo:

Plug in with a Les Paul, channel two, put everything at six, flip the mute (standby)… You'd better have some spare underpants to hand because this is loud, fat as hell and with a wicked, instantly loveable rock distortion tone. The drive teeters deftly between crunchy sizzle in classic cranked Marshall tradition, and a solidity and smoothness in the gain that hints at something more modern.

The 'shade' control is the instant route to controlling the width of the tone, where you can go from trouser-flipping bass through a 4 x 12, to a lighter, more punchy cutting sound. Knocking back the volume pot cleans things up for crunchy goodness, and to be frank if the Classic Lead 80's default sound was this, with just one knob for volume, we'd be happy: five stars for sound. But there's more…

In channel one, below 12 o'clock on the gain control is light crunch territory, offering up a Marshally 'clean' sound that's relatively square and direct compared with the bell-like tone of a classic 6L6-loaded open back combo, for example.

Pushing the gains past the mid-way point brings in extra gain stages that take you from a JCM800-type crunch, into more cascaded, modern gain styles, albeit retaining that classic British sizzle in the top end.

Maximum gain is enough for metal, not least when you take advantage of the extremely powerful EQ section. Unlike a classic Marshall, this active EQ section offers a huge degree of cut and boost in bass, middle and treble; for example you can knock the middle down for a Kirk Hammett-esque fizz, or whack it up for a Santana-y fruity honk and everything in between.

Better, there's no guesswork - the pots work like you want them to work. More bass? No problem. Less treble? Certainly sir - not all amps are as easy to manipulate.

Playing the Classic Lead 80 begs two main questions. First, why the hell doesn't Marshall make this amp? And second, if killer rock guitar tone is this easy to dial in with such a simple front panel, why does everybody else bother with endless switches, modes, channels and so on?

Once again you can see where this is going: if you play rock anywhere between Ritchie Blackmore, through Slash and veering into Van Halen, this amp simply must be on your try-list. At £1,249 for a hand-wired all-valve amp from the UK it seems like excellent value. One question remains: what are you waiting for?