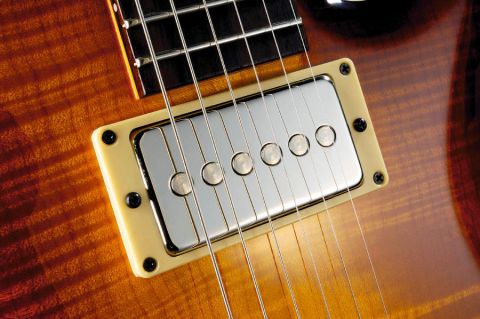 If you´re ready for a super T-style instrument built to be the best, and if your pockets have the depth, then your search could end here.

Because Hamer has spent time both in and out of the limelight since it was formed back in 1973, it's sometimes seen as a relative newcomer in the high-end US guitar circus. The reality, of course, is something else entirely.

Jol Dantzig and Paul Hamer virtually spawned the entire 'boutique' business when they realised that disastrous decision-making at Gibson had laid the field open to anyone prepared to put quality before bottom line.

Twenty-five years on and, with Hamer himself long gone, Dantzig's song remains the same. He sees his guitars and their players as "a club, a lifestyle" and "more Coltrane than Limp Bizkit".

The official Talladega blurb states: "The idea was to balance a warm-toned chambered mahogany body with a maple neck as a way of getting both an airy snap and a rich fundamental." To this end Dantzig spent 18 months designing and refining the Talladega (named after the city in Alabama best known for its NASCAR circuit), enlisting long-time friend Seymour Duncan's help to come up with a set of pickups tailored to his vision.

"The Talladega has that rare combination: a voice of its own - in fact four great voices - but all within boundaries we've come to know and love."

As ever, the finest tonewoods and hardware have been used. These include an ivoroid-bound South American mahogany body with book-matched curly maple cap, and a dark rosewood fingerboard topping a 'V'-shaped maple neck. Hamer's own chrome-plated brass Sustain Block bridge, TonePros' classic Kluson-style Keystone tuners and an anodised aluminium control cavity plate complete the picture.

Close scrutiny of almost everything from the glorious amberburst lacquer finish to the fitting of binding, neck, nut and frets - even the choice of a conical jack receptacle that allows the plug to glide in unimpeded - reveals unbeatable attention to detail.

Some may feel the headstock is a little large (or might look better unbound), or view the 12th-fret 'victory' inlay as a touch unnecessary, but these are personal preferences. If we must be picky, the cream surrounds don't allow Seymour's pickups (named Double-D after Duncan/ Dantzig) to sit 100 percent parallel to the strings, but if this almost insignificant flaw is all we can uncover then we'll choose to look the other way.

We've played several Hamers recently and the experience has never been less than exhilarating. Although the Talladega's elegant body is almost identical in depth to a Tele, its dropped edge and cream binding make it appear less wieldy.

A chamfered cutaway and Telecaster thumb-crook where the shoulder meets the neck make top-end playing more pleasing than on a Les Paul, and the neck's marked 'V' profile finds an instant friend in most players' palms.

The Talladega's fingerboard is perfectly finished and flawlessly fretted. Hamer calls these frets "wide oval" - the same term applied by Gibson to its post '58-style wires. On the 'board's flat 356mm (14-inch) radius they're the perfect playground for any bluesy rocker - the Talladega player surely envisaged by Dantzig. Those vital requirements of smooth bends and effortless vibrato are met with ease, so much so that any player could gig it straight out of its form-fit, plush-lined case.

Dantzig was adamant the Talladega would have the sound he heard in his head - that "airy snap and rich fundamental". So after collaboration with Seymour Duncan, two individual pickups came to be. "Because I wanted to be able to join the pickups in series as well, the balance was extra important," he explains. So each Double-D single-coil is ever so slightly different.

Although both are housed in humbucker-sized surrounds with a single line of non-adjustable polepieces down the centre, the neck pickup uses steel poles over P-90-style bar magnets, whereas the bridge model uses Tele-style 'magnet' polepieces with the bobbin set atop a copper reflector plate for better string separation and 'twang'.

Jol's mention of "series wiring" implies more than the Telecaster's basic three-way selector. Sure enough, here we see one of our favourite Tele upgrades: the four-way switch provides Dantzig's 'in-series' facility, allowing the pickups to be wired 'one behind the other', rather than the more traditional 'side-by-side' (parallel) found in almost all other guitars. Queen fans will know that Brian May's Red Special has the series option and it's this that gives those giant walls of sound.

On the Talladega the 'series' setting is found at position one - towards the fingerboard. The remaining three are: position two, neck; position three, both pickups in parallel; position four, bridge. With the luxury of a Cornford Carrera and a Divided By 13 RSA31 to hand, let's have a listen...

There's a real snarl to this bridge pickup. Think of a halfway house between a Les Paul Junior and a great Tele and there you have it. Through the non-master-volume RSA31 it is fat and punchy, with that unmistakeable 'snap' that favours Zeppelin-style riffage or mad country leads (Brad Paisley would have a field day). Through the driving Cornford it is almost more P-90 than Tele, but listen closely and that telltale bite is there - the copper reflector plate working its magic, perhaps.

With both pickups on, position two is 'Stairway lead mode', or a sound that would handle any rhythm duties from The Beatles to AC/DC. Switch to position two and we hear the neck pickup on its own. Through the Divided By 13 it's warm and fluid; anything from vintage rock 'n' roll to dirty jazz or early blues is there. It is always more comfortable with medium or less gain, so if your playing can stand the exposure you will reap the rewards!

Flip to position one, series mode, and things get extremely girthsome. Any small amp driven into heavy overdrive will struggle to cope - unless you really pile it on for those throbbing Queen-style chords or harmony leads. The Cornford loved it! But in most situations, where you want to hear the fruity neck pickup and the bridge's rawness in equal measure, backing off the front end a tad is all but mandatory. The Talladega has that rare combination: a voice of its own - in fact four great voices - but all within boundaries we've come to know and love.

Stunning quality, plus performance updates on tried and trusted designs, has always been a Hamer hallmark. From the Sunbursts and Standards of the '70s, right up to this Talladega, Jol Dantzig's desire to make 'quality' and 'quiet innovation' the company's watchwords has resulted in some true greats.

Almost impossible to fault, it's one of those instruments that - if you want understated beauty combined with ruthless efficiency and unmitigated class - must go straight to the top of your shortlist.