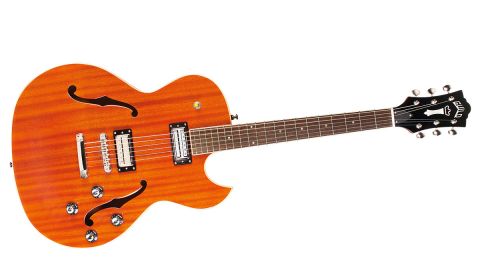 This guitar is a class act that's light in weight but balanced on your strap, and with a resonance and vibe that's heaven-sent.

The Newark St Collection recalls some of Guild's classic 50s and 60s guitars, but builds them in Korea.

Back in the day, Guild's USA instruments were a viable alternative to Gibson and Gretsch, and the Starfire range - introduced in 1960 - was hugely successful, attracting players such as Duane Eddy and George Benson, not to mention Buddy Guy, Muddy Waters, Lightin' Hopkins and Robert Lockwood Jr.

New owner Cordoba has carried on expanding the range, which started out when Guild was still under the Fender umbrella.

Aside from adding a top-of-the- line Starfire VI at this year's NAMM show, Guild also introduced this start-up model, which recalls the first single-cutaway Starfires, based on the previous thin-bodied T-100 Slim Jim.

The Starfire II isn't a slavish vintage replica and comes without the fingerboard binding of the existing III, no pickguard or case, and just this natural gloss finish. Now, if that whiffs of penny pinching, don't worry: all the important bits are present and correct, and it costs £184 less.

The Starfire II is a 419mm (16.5-inch) wide hollow body with a thinline depth (48mm at the rim) and single 'Florentine' cutaway. While it doesn't have a full centre block, there is a large-ish block that connects top to back and is used to mount the tune-o-matic-style bridge and stud tailpiece - it's not vintage-specific, but should add a little more solidity and sustain to the sound.

There's simple cream edge binding and a gloss polyurethane natural coating that shows off the distinctly striped mahogany laminate construction. The mahogany neck is three-piece with a headstock splice and additional heel piece, while the rosewood 'board has a Gibson-like 305mm (12-inch) camber, nicely fitted medium gauge frets, dot inlays and a 'vintage soft U' shape. It feels more of a 'D' to us: meaty but far from over-big and chunky.

The control setup is pure Gibson with no master volume, just like the Bigsby-equipped V, while the ribbed, silver-topped control knobs are a nice period detail. The knobs may look the part, but it's the LH-1 'Little Bucker' pickups that not only recall the original Guild units in appearance but capture the 'halfway between a single coil and a full-sized humbucker' tonality that give this - and the other new Starfires we've tested - its major calling card.

They sound superb, adding clarity to the hollowbody frame that's just as applicable for old-style jazz as it is rootsy, alt-rock crunch and gain.

Okay, it is mostly hollow, so feedback can be an issue, but get it right, hit a clean boost into the front-end of a Fender-style amp and the thing damn near takes off. Glorious.