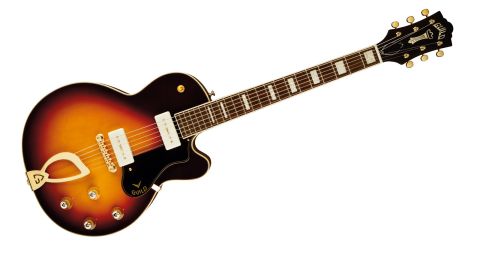 A great tool for jazz, funk and soul players, the M-75 Aristocrat looks the part, sounds the part - and your back will thank you for it, too!

The M-75 Aristocrat, from Guild's vintage-appointed Newark St range, is so refined, you'll want to put on a suit before playing it.

You might even consider strapping it on a little higher. But no matter how you wear this vintage single-cut, it's designed to complement the human condition - spiritually and physically.

It's more than sympathetic to your sciatic nerve, as its chambered mahogany body with laminated spruce top lends itself to a guitar that feels compact and as light as balsa.

The spiritual fillip comes from plugging it into an amplifier, wrapping your hands round its vintage soft U-profile neck and wondering how such a comfortable guitar could sound so beautiful and, moreover, so substantial. The Aristocrat has a pair of Guild's Frequency-Tested single coils in neck and bridge that confound expectations.

With a clean tone, the neck pickup is all warm and woody cream, but where a solidbody would be layering it on thick, there's a lightness, an aerated quality that might be weight-relieved but never sacrifices depth.

In the bridge position, the clean tones could convince you that your suit should be brightly coloured with a wide trouser; the Aristocrat specialises in the sort of clearly enunciated bright-pop and bell-chime tone that would be right at home on Soul Train: 100 per cent jazz, funk and soul.

Turning up the gain finds a yowling, chewy rock voice hidden beneath the finery, too - a reminder that a guitar's looks can be deceiving, and its tone is whatever you make of it.