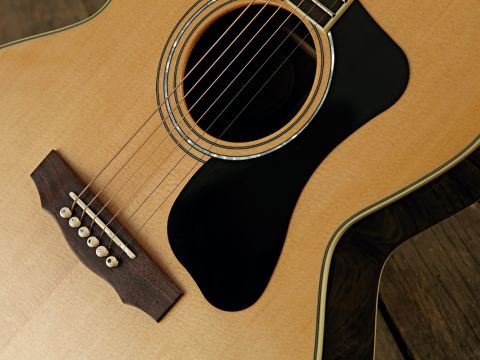 Has the potential to be another fine Guild jumbo.

"The F-150 gives the impression of needing a good dose of vigorous playing-in in order to unlock more richness and dynamic verve from the guitar."

The spruce/rosewood jumbo F-150R is inspired by Guild's long-running Traditional Series F-50R, but doesn't share the latter's 438mm (17.25-inch) super-jumbo body span. Instead, measurement across the lower bouts is a more modest 422mm (16.6-inches), though allied to capacious 119mm-deep rims it's still a sizeable instrument.

Binding is similar to the F-130CE's, but to this is added a wood-mosaic centre line down the back, while the rosewood fingerboard, with its model-appropriate rectangular pearl block markers, is also cream-bound. Other 'deluxe' elements include a sculpted rear-bridge profile as on the original F-50s, and gold die-cast tuners that look the part - though a few have some slack in their gearing.

The F-150's satin neck is constructionally similar to the F-130's, but with general playing rather than picking the stated aim here, the width is a regular 43mm at the nut, with bridge string spacing tightened to 53mm. The depth is again shallow, offering a speedy, very easy-playing handful that is once more enhanced by the immaculately dressed fretting and a low, buzz-free action.

The F-150 slightly flatters to deceive. It has the requisite low-end thump you'd expect from a decent jumbo, but outright volume and projection from the player's standpoint aren't exceptional given the generously proportioned soundbox. That said, it's by no means a shrinking violet; rather it gives the impression of needing a good dose of vigorous playing-in in order to unlock more richness and dynamic verve from the guitar.

There are detail aspects, compared with the previous series, that reflect Guild's keeping a beady eye on production costs: loss of the Chesterfield motif, satin rather than gloss neck, and plastic not wood bindings.

But none of these ought to be a deal-breaker because essential quality remains tip-top. The F-150R jumbo's from-new sound slightly disappoints but it's otherwise a class instrument with maturing potential. If the rest of the series musters similar merits, continued success for the GADs is a cert.