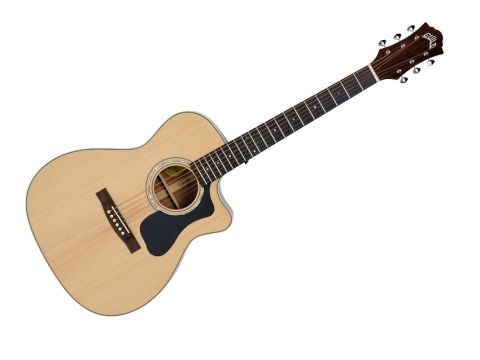 Desirable mid-size all-rounder electro sure to attract many takers.

"Fired up, the Sonitone is a very able performer. Gain is enthusiastic, cross-string output balance is spot-on, and the voicing pleasingly natural."

Based on the F-30, one of Guild's early instruments back in 1954, the F-130CE is an OM-size cutaway electro has a spruce top and mahogany back and sides, cream bound with simple three-ply black/white purfling around the front, a style echoed in the pearl-inlaid soundhole rosette.

With evident cross-silking on the top, timber quality looks good and internal vertical reinforcing strips on the rims affirm the all-solid build. The high-gloss finish is immaculately buffed and the internals are pristine and tidy.

Unlike on first-generation GADs, the full-scale mahogany neck is satin rather than gloss, but save for a separate heel portion and narrow wings making up the full width of the headstock, it's a one-piece affair. Another minor economy is that the headstock, as on all new GADs, no longer bears the 'Chesterfield' motif, a cosmetic marker Guild also dropped when it introduced the US-made Standard Series last year.

Topped by open-geared Waverly-style tuners and usefully having a second strap button at the heel, the neck is semi-wide, commencing at 44.5mm across the nut and offering a generous, fingerstyle-friendly 56mm-plus bridge string spacing.

The grip feels comfortably snug and slick thanks to the shallow, flat-back 'C' profile and low-ish action, and fretting along the unbound rosewood fingerboard is very well dressed. The only minor irritation is sharp nut corners, but these are easily rectified with a few strokes of a file.

Like other GAD electros, power comes from Fishman's Sonitone undersaddle pickup with active endpin preamp and soundhole volume and tone controls. The 9V battery is housed in a velcro'd pouch on the face of the neck block.

The acoustic delivery is OM-like, with clear, precise articulation, an open-toned, sustainful blend of warmth and brightness and commendably good dynamics for the body size.

Fired up, the Sonitone is a very able performer. Gain is enthusiastic, cross-string output balance is spot-on, and the voicing pleasingly natural. There's plenty of travel on the tone wheel, but the difference between min and max is fairly subtle, although it's sufficient to add a nice sparkling edge from a neutrally toned starting point.

As we have seen, there are detail aspects, compared with the previous series, that reflect Guild's keeping a beady eye on production costs: loss of the Chesterfield motif, satin rather than gloss neck, and plastic not wood bindings. But none of these ought to be a deal-breaker because essential quality remains tip-top. The F-130CE is a very capable OM picker with a simple yet effective pickup system. If the rest of the series musters similar merits, continued success for the GADs is a cert.