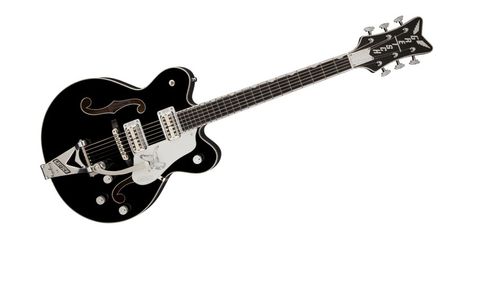 The coolest video guitar in the world just got reinvented as a viable stage guitar... if you can afford it!

They're clearly desirable and cool as hell, but Gretsches have always held something in common with that other great old European immigrant-founded US brand, Rickenbacker: while you have to have the real thing to really nail that sound and aesthetic, the instruments themselves are perceived as somewhat idiosyncratic, often too much of a liability for many of us to confidently wield down at the local. A great third or fourth guitar, or a luxury purchase? You bet. But outside of the obvious rockabilly, not exactly a dependable, do-it-all workhorse.

Outside of the conservative blues-rock mainstream, though, there are pockets of players for whom Gretsch is the only brand that matters. Brylcreem'd rockabilly outlaws and retro rock 'n' roll gunslingers in their thousands have found ways to saddle up and ride these broncos with great success.

Meanwhile, whole cottage industries have sprung up around modified Gretsch parts, from the well-known likes of Thomas V Jones and his pickup designs to more niche operations such as Compton Compensated Bridges and Tru-Arc Bridgeworks.

Simply, there are ways to make these instruments viable for much more than just visual kicks. Even in a louder, dirtier context, you can keep the fabulous racket made by using big hollowbody Gretches with overdrive under control by judicious use of foam, rags or even careful amp positioning.

Still, wouldn't it be nice to get a frankly bloody expensive guitar out of the case and find that it doesn't require any modifications to cope with the rigours of high-volume, high-gain live performance? And that's where the new Gretsch Center-Block series comes in.

Like the other instruments in the company's Professional Collection, the guitar here is manufactured in modest numbers in the small Terada factory in Kanie, Japan with much of the production process being carried out the old- fashioned way, by hand.

With a lower bout width of 406.4mm (16 inches) and a body depth of 44.45 mm (1.75 inches), the Falcon Center-Block Double Cutaway is immediately an easier beast to grapple with than the traditional 431.7mm (17-inch) wide, 70mm (2.75-inch) deep full hollowbody models elsewhere in the Gretsch catalogue and those of old.

This brings the Center-Block Falcon smack bang into Gibson ES-335 territory in physical terms and as a result it feels well proportioned to all but the most Lilliputian of six-stringers.

The Double Cutaway Falcon is constructed from three-ply maple with a spruce centre block that is itself chambered at the lower bout in the interests of weight reduction and resonance. The bass-side cutaway makes for a more compact ride with easy upper-fret access. Most ES-335s utilise a maple centre-block with a spruce 'fillet' between it and the maple laminate top.

For anyone used to a full hollowbody, the guitar here exhibits a plonkier, less lively, slightly banjo-like acoustic response, much like Gibson's flagship semi. Anyone who has ever plugged in an ES-335 and played one in anger will know that this in no way translates to a lack of sustain or resonance in an electric scenario, but more on that later.

Unlike many Filter'Tron equipped Gretsches, the G6139T-CBDC doesn't feature a three-position tone switch (aka the 'mud switch'). Whether traditionalists like it or not, most modern players will find a master tone pot on the lower bout much more agreeable than they would a three-position toggle in the downward playing arc that can easily be knocked accidentally and result in a muffled honk when glorious twang is the order of the day.

At the bridge end, there's something charming about being confronted by the crude simplicity of a sand-cast aluminium Bigsby B6 in this age of technological acceleration. It feels rather akin to gazing upon a quaint old plough in a farming museum, yet for this writer's money, Paul Bigsby's design is still only rivalled by the Jazzmaster vibrato in terms of its smooth musicality in use.

Perhaps because of the chrome hardware, silver-sparkle binding and logo that actually look subtle next to the white single-cut, there's a business-like, rock 'n' roll vibe to this guitar that just begs us to drag it on stage and give it a shoeing. Not bad going for a guitar knocking on the door of three grand on the street.

Harnessed to a well-behaved chassis, you can use a Filter'Tron pickup for almost anything. And that's the beauty of this instrument. Where Gretsch's humbucker-loaded hollowbodies were always amazing sounding beasts that could be tough to keep under control in a high volume, overdrive-rich context, all this Center-Block guitar behaves much like a good ES-335; there's feedback here, but the musical, desirable kind.

Let notes hang, encourage them with a little left-handed vibrato and they are quick to bloom... then just add Bigsby or manhandle the body and give the whole guitar a shake for maximum thrills. It's tough not to get carried away and you can see exactly why white-knuckle noise merchants such as Neil Young and Pete Townshend have had such creative relationships with Gretsch guitars over the years.

Although you might expect instruments in this price bracket to feature USA pickups built by TV Jones, the Japanese High Sensitive Filter'Trons that come as standard in Gretsch's Professional Collection are much-improved over the brash, overly microphonic units fitted to Gretsch instruments throughout the 1990s and before Fender's acquisition of the company in late 2002.

If you can bring yourself to back off the gain, there's still plenty of Chet here, too, and for that Beatles For Sale/Help!-era Harrison sound simply flip the pickup selector to the middle setting and dial in a suitably bright amp tone.

Of course, winding up the wick in a tweed-y direction opens the door for your Stones and Neil Young-isms, while a more Marshall-style driven sound brings AC/DC and Billy Duffy to the table. Here, where a full hollowbody might begin to howl uncontrollably, you can continue to crank that drive and head into Soundgarden-style heavy riffing and beyond into fluid lead territory.

There's no getting away from it: this is a very expensive guitar priced firmly in the pro/serious collector/custom shop ballpark. But if you really want a Gretsch Falcon, there's no substitute for the real thing. And if the only thing putting you off is how it might perform in a loud, saturated context, you need worry no more.

This is a Falcon for the modern age, albeit with plenty of quirky Gretschiness intact. As well as looking the part, it just feels right. A comparison with Gibson's ES-335 seems relevant, but this Gretsch Center-Block design has a feel, vibe and sound all of its own. Scary price, scintillating guitar.