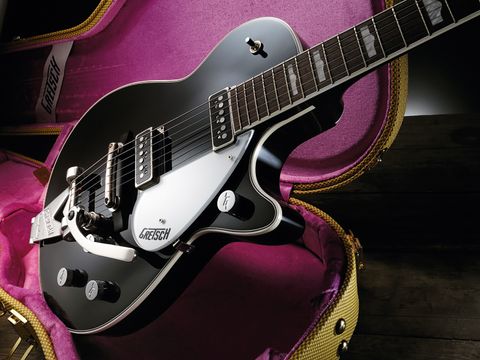 It might not be the Tribute, but with its top build, great playability and '50s tone, this is no consolation prize.

With respect to Stray Cat Brian Setzer and country legend Chet Atkins, no guitarist has done more to boost the profile of Gretsch guitars than George Harrison.

So, why has it taken so long for Gretsch to get the signature of its greatest ambassador on a headstock? Well, as Gretsch Custom Shop master builder Stephen Stern reveals, it hasn't been for want of trying.

"Fred Gretsch was working with George on a signature Duo Jet," Stern tells us. "When we went to see the Harrison family to discuss the Tribute model, they had one of the prototypes.

"It wasn't 'right'. But with its manufacturing facility through Fender, I think Gretsch is in a better position now to make a George Harrison signature model."

Opening the deluxe tweed case of the new G6128T-GH George Harrison Signature Duo Jet, it's hard to argue with Stern's assessment. If you don't gasp a little when you see that flawless black paintwork and gleaming chrome hardware contrast with the bubblegum pink lining of its case, you're not the right punter for this guitar.

The Japanese-built Signature is not an exact replica of George's original '57 Duo Jet. If you've got your heart set on something like that, bite the bullet and find the £15,118 and pocket change required for the US-made G6128T-GH George Harrison Tribute Custom Shop Duo Jet - this Signature is basically a '57 Duo Jet reissue with some obvious 'Georgian' tweaks.

Like his original guitar, the Signature has a pair of DynaSonic single-coil pickups, a Bigsby B3 True Vibrato with a Phillips screw holding on the arm, a rocking bar bridge, and the offset lower strap button. It also features 'hump-block' fingerboard inlays (which only appeared on the '57 model), thin vintage-style frets and an all-black finish like George's guitar.

The Signature is also the only import Duo Jet reissue with period-correct body dimensions. Like George's original guitar, and therefore the US Tribute model, the Signature's chambered body is 51mm (2 inches) deep, while the other Duo Jet reissues bottom out at 44.5mm (1.75 inches).

There are some details that George's original Cavern blaster and the new Signature version don't share.

For example, the shape of the scratchplate support brackets and wood bridge bases don't match. Neither do the screws that hold the Bigsby hinge in place: George's guitar has chrome slot-head screws; the Signature has black Phillips-head jobs.

The Bigsby B3 vibrato's baseplate sits closer to the body of the original guitar than it does on the Signature; the tuners are a bit different too. But these are small things, which can be 'fixed' by true detail freaks.

The most important difference in the spec sheets of these guitars is the fingerboard radius. The Signature model has a 305mm (12-inch) radius fingerboard; George's old '57, and its Tribute doppelgänger, have a 229mm (9-inch) radius 'board.

The playability offered by the Signature, however, is first class. That flatter 'board radius makes noodling above the 12th fret a more practical prospect than on a vintage Gretsch.

The only niggle we have here is with the bridge - like many Gretsch guitars, the bridge on our Duo Jet can slip out of position on occasion. A pinned bridge would solve that little problem.

You'll also find that the intonation offered by the bar bridge is far from precise, but if you buy a vintage reissue you just put up with this sort of thing - it's part of the charm of old guitars. Moaning about it is like complaining that the brakes on a '60s MG Midget aren't too clever.

The inherent hum that plagues single-coil pickups may be a deal breaker for some, but after plugging the Signature into an amp we say, hum be damned. These DynaSonic pickups sound great.

Gretsch guitars loaded with DeArmond DynaSonics (as they were branded back in the day) powered the music of George Harrison's heroes: the likes of Eddie Cochran, Duane Eddy, Chet Atkins and Cliff Gallup, the peerless Gene Vincent & His Blue Caps guitarist.

These modern Gretsch-made DynaSonics pump out oodles of vintage twang. The bridge unit sounds fantastic with a generous splash of reverb, especially when you start shaking that whammy bar.

Engaging both pickups works great for rockabilly and old school rhythm and blues licks. The neck pickup is the go to setting if you want jazzy chords. All you need to get the most from this guitar is a decent valve amp, some reverb and an echo chamber.

While the Signature sounds great straight from the case, if this was our guitar - and we really wish it was - we'd slap on a set of tape-wound strings to warm it up a little.

That small change would promote an even more authentic fifties rockabilly tone (think Cliff Gallup on Gene Vincent's Race With The Devil); and the sound that filled The Cavern Club in Liverpool back in the early '60s, courtesy of a young man called George.

The £70 (not forgetting the IOU for £20) that George paid for his original Duo Jet was a lot of money in 1961. Well, the £2,818 price tag hanging from the new Signature version is a fair old wad of cash these days as well.

That said, the thrill you'll get every time you lift the lid on the G6128T-GH George Harrison Signature Duo Jet's case makes missing a bunch of nights out or a holiday abroad an easy sacrifice in our opinion.

This flawlessly built guitar transports you back to one of the most exciting and important periods of British rock 'n' roll, when four young lads from Liverpool learned their craft in the tough clubs of Hamburg - before going on to change the world.

Living with the Signature, you can see why George loved his Duo Jet. This guitar gets under your skin.

When you're not playing, polishing or looking at this Jet, you'll be thinking about it. Just like George did that night in summer 1961 when he returned home with his 'first real decent guitar'.