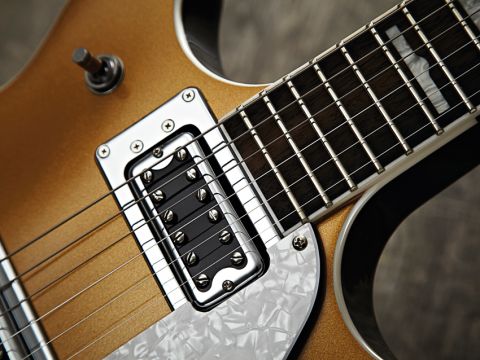 Yes, we wish it still had the thumbnail inlays but we'll get over it. The Double Jet is a versatile rock 'n' roll guitar.

Electromatic Series guitars aren't just a good way of getting your hands on an affordable Gretsch, they've actually developed a bit of a cult following in their own right.

For example, owners of the Pro Jet and 5120 semi-acoustic often rip out the existing pickups to replace them with higher spec TV Jones models. Type in 'Electromatic modification' into YouTube and you'll see what we mean.

The Electromatic Double Jet pays tribute to the double-cut Duo Jet that Gretsch launched in 1961. Aside from the extra cutaway, the Double Jet's spec is identical to its single-cut brother.

But here's the niggle: the pre-facelift Electromatic Double Jet had period-correct thumbnail fingerboard inlays, and they just looked 'right'. Here Gretsch has chosen to replace the Double Jet's thumbnails with '57 'hump block' inlays.

It's unlikely to make any difference to the vast majority of people, but it's the kind of thing that keeps us - and Gretsch nerds - awake at night. Fellow detail fans will be pleased to know, however, that the horseshoe Bigsby fitted to our Double Jet is period-correct, although some '60s Jets came with a Burns vibrato unit or a G-cutout tailpiece.

So much for history - it's gold, sparkly and still as cool as your granny's mood when you wake her at 4am with AC/DC riffs. Which you will. Let's plug in…

Running the Jet through a clean channel it's immediately clear that the new Blacktop Filter'Tron pickups are more Gretsch-like than those original mini-buckers.

The bridge Blacktop has much of that punchy clean sound that we expect from a Duo Jet. It's great for beating out old-school rock 'n' roll riffs. Gretsch guitars are more versatile than we give them credit for and both Jets pump out convincing rockabilly, blues and surf tones.

Then there's the rock stuff. Steve Marriott of The Small Faces and Humble Pie, and Malcolm Young of AC/DC, have both proven how great Gretsch Jets sound with some overdrive. The Blacktop Filter'Trons work great with the filth. The inherent brightness of the pickups cuts through an gives the overdriven tones a ballsy edge.

We're not claiming the Double Jet sounds like the high rolling Professional Series Gretsch models. There is still a big difference, but these latest Electromatics get closer than ever to the real deal.

It's time to give that elephant in the room a right good kick up the rear. Which is to say, why didn't Gretsch go the whole hog and build affordable replicas of its classic Jets while it had the chance? It wouldn't have taken much more effort.

Maybe Gretsch doesn't want to compromise its Japanese-made Professional range: if you buy a two grand-plus work of art such as the Gretsch G6128T-GH George Harrison Signature Duo Jet, you want everyone to know you unloaded your bank account on it. A 500 quid doppelgänger of your new pride and joy would likely not make you happy.

But as things stand, the Double Jet is perfect for Gretsch virgins seeking out great build, playability, tone and good looks. And the Electromatic cultists will no doubt keep on pimping them to get them even closer to the real thing, despite the pickup upgrades.