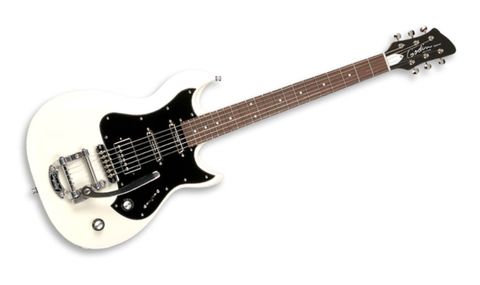 The Belmont doesn't quite have the palpable vibe of other Richmond models, it ticks a number of boxes few other guitars do.

The Belmont, alongside the recently-reviewed Dorchester, forms part of the new Richmond range from Godin and makes a valiant attempt at cramming anything a player would realistically need onto a single guitar. The Bigsby vibrato is mounted on a solid mahogany body with attractive contouring and compact cutaways.

The two-piece neck is slinky with a rosewood 'board, pre-worn in a process Godin calls 'Ergocutting'. It's eminently playable, and the mahogany's flawless finish increases the overall comfort.

Godin has opted for an interesting combination of pickups, with a pair of Seymour Duncan lipstick-tube single coils sitting rather self-consciously alongside a covered '59 Duncan humbucker.

On plugging in, the mismatch between the subdued output of the lipsticks and the roar from the '59 is immediately apparent, which can be offputting. That said, you can clean up your sound at the flick of the selector switch and if you set the amp gain just so, this could prove a useful tool when playing live.

For funky clean chops, the lipsticks are just the ticket, with the glassy combination of the two sounding the most convincing. The intrinsic jangle is beefed up by the body mahogany to give a genuinely impressive tone that works well either dry, or with a touch of echo and chorus.

Although the Belmont doesn't quite have the palpable vibe of other Richmond models, namely the aforementioned Dorchester, it ticks a number of boxes few other guitars do. From jangle to all-out rock? You got it.