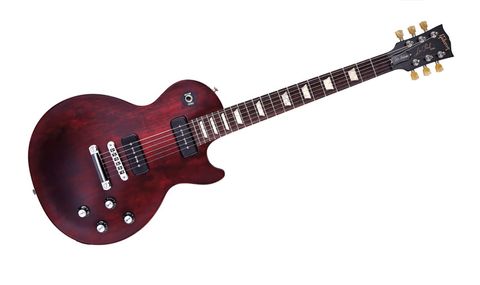 Self-tuning naysayers should investigate the Grover-equipped versions of the Tribute series, but we urge the more pragmatic among you to give the Min-ETune a spin!

Although 1952 was the year that the Gibson Les Paul first arrived on the market, Gibson has chosen 2013 - the, erm, 61st anniversary of the guitar's introduction and the 98th anniversary of the birth of Lester William Polsfuss - to celebrate the iconic musician's love of guitars with The Year Of Les Paul.

What this means, in practice, is a boatload of new versions of the guitars that originally carried his name: the Les Paul and SG, starting with the Les Paul '50s Tribute.

The '50s Tribute may hark back to the LP's earliest decade, but it's been brought bang up-to-date with Gibson's Min-ETune system - the firm's latest take on mechanical self- tuning for electric and acoustic guitars.

Developed with German company Tronical, the headstock-mounted gears are the next generation of Gibson's 'Robot' technology, and appear on the new Tribute Les Paul and SG models. The whole Min-ETune system - tuners included - sits on a thin black rectanglular plate that covers most of the rear of the peghead. The weight impact is negligible and visually, it's very discreet, too.

Another feature common to all new Tribute models is what Gibson refers to as its 'Vintage Gloss' nitrocellulose finish.

In the flesh, this is a pleasing off-the-gun thin satin nitro, complete with grain sinkage, that hasn't been cut back or buffed to a mirror-like sheen. Straight out of the gigbag, the guitar feels more akin to a well-used workhorse than the traditional gloss and has an immediate pick-me-up-and-play-me appeal.

The weight-relieved Les Paul '50s Tribute is a meaty but far from crippling 3.6kg, and while its Wine Red finish is smart and understated, there's a killer-looking Gold Top/Dark Back option that may cost an extra £100, but is certainly more evocative of the period.

Cream pickup covers would have been more period-accurate, but black looks better in combination with the Wine Red guitar here, so it's a moot point. And also, stained or not, it's pleasing to see a nice dark slab of rosewood on the guitar's no-frills unbound fretboard.

When making guitars in the continental USA at this price point, economics dictate that something has to give. In this instance, it seems to be the fretwork that's missed out on a final dose of TLC, with a number of uncomfortably sharp edges letting down an otherwise inviting rounded '50s neck profile.

That said, in common with virtually every Gibson that has landed in the Guitarist office over the last couple of years, the '50s Tribute has bags of acoustic resonance and sustain, which always bodes well for a guitar's amplified tone. We're not quite sure what it is, but Gibson is doing something right when it comes to building inspiring guitars in Nashville.

The '50s Tribute Les Paul is a star performer. Every recording guitarist should have a P-90- loaded Les Paul in their armoury, because it's one of the most effective tools for tracking rhythm guitar sounds that there is. The combination of muscle and sinew here is timeless, doing the business for anything from '50s rock 'n' roll, through to Keef, alternative rock and pop-punk.

The truly massive potential of the Min-ETune technology notwithstanding, this guitar sounds very good indeed, and with just a touch of careful attention applied to the fretwork, it would be difficult to fault for the price.

But the real talking point here is the Min-ETune functionality. Some players will sneer at the mere idea, of course, but anyone who does a lot of studio recording or uses multiple tunings in a live scenario should check it out without delay.

For once, we find ourselves writing about new guitar technology that just seems to work and doesn't look like a dog's dinner in the process. Bravo Gibson and Tronical.