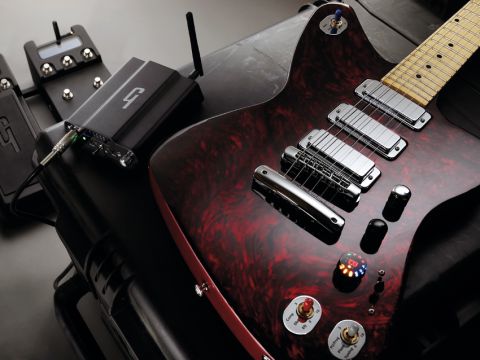 While we applaud anyone trying to push the electric guitar forwards, we seriously wonder if the Firebird X is the future of electric guitar, especially at this price.

Gibson is no stranger to innovation, despite its position in 2011 as a heritage brand in many players' eyes.

For example, its most highly prized electric solidbody - the Les Paul Standard - had a torrid time with popularity throughout the 1950s, even in the holy grail flametop 'burst format of 1959.

But it just wasn't selling, so Gibson made it into what we now call the SG: a fiercely modernist design that also had plenty of critics - not least the man whose name was still on the headstock! Ever forwards, maintained Gibson.

Shortly before that was the Flying V and Explorer. "Russia has her satellite, perhaps to the embarrassment of the US," crowed the Gibson Gazette in November 1957. "But the Gibson folks have come forward with their own first; the futuristic Flying V guitar." And yes, they're cool today, but popular opinion considered them laughable in 1958.

There are plenty of other examples of Gibson's innovations being poorly received at launch. Some proved to be slow-burners - lovable curios, perhaps - while others were genuinely ill-conceived.

The seventies RD Artist that featured Moog-designed onboard electronic wizardry could be either, depending on your opinion. In any case it didn't last long, and neither did the Corvus - one wacky shape too far.

With the advent of affordable and reliable digital technology has come another spurt of Gibson innovations, driven by chairman and CEO Henry Juszkiewicz. First, in 2006, the HD.6X-Pro Digital Guitar enabled you to rout each string to a separate amp and effects chain.

The following year, Gibson's much-lauded Robot Guitar introduced the by-then Gibson-owned auto-tuning technology, originally conceived by Tronical. Then 2008's Dark Fire mixed the self-tuning system from the Robot with Chameleon Tone Technology, which provided a wide choice of very different pickup sounds at the twist of a single knob.

After that the Dusk Tiger, released in 2010, re-evaluated and improved the concept to make the instrument "more like a live guitar".

Each of these contemporary releases has been undoubtedly impressive in the terms of genuine technological innovation and clear forward-looking vision. On the other side of the coin, there are two problems as far as we can see.

First, with rock 'n' roll history cemented for the most part, precious few guitarists have any interest in moving 'forward'. Second, and perhaps as a result of this, not one of Gibson's latter-day innovations has been met with huge enthusiasm by the guitar-playing public - have you ever seen anyone playing one?

And so to the delayed launch of Gibson's latest techno-guitar, the Firebird X. Many of you, and us for that matter, have seen the online pre-launch pictures and press releases and, well, let's just say that we've probably all formed our own opinions before we've even seen one in the flesh. Let's try to suspend all that for now and judge it on its merits.

The Firebird X aims to deliver its myriad tonal charms courtesy of what Gibson calls a Pure-Analogue engine. As with the Dusk Tiger, Gibson doesn't provide a manual with the guitar - you can download it when you register your purchase online - so we find ourselves as in the dark as anyone when it comes to how to use it.

But the literature we have procured suggests that this isn't a digital device in the modelling sense; it's an analogue signal path with digital control.

Not only does the FB-X include the aforementioned Robot tuning system, there are also 55 presets into which you can save your own tones based on a selection of onboard effects and pickup simulations.

It offers three modes: Patch Play, within which you use the saved tones; Live Edit, which lets you create and save any sound; and Program, which allows you to make conventional pickup selections within a saved tone.

In the first two modes, the five-way lever switch acts as a patch selector within banks that are themselves chosen via the Gear Shift control, a familiar feature from previous such guitars that also controls the tuning system.

In addition there are three tog-pots - three-way toggles that give access to various features. Blue and red control a selection of effects; grey allows access to the tuning system, the piezo system and Program mode. All three have rotatable central shafts for instant volume or effect level control.

There's a lot for your brain to deal with, but like anything, the more you use it, the more you start to use functions without having to think too much. The three pickups comprise three specifically designed mini humbuckers that feature ceramic, Alnico II or Alnico V magnets and each can be split, tapped, muted or have their polarity reversed as required.

But that's not even half the story. Supplied with the guitar is a carryall literally stuffed with all manner of goodies, the most important of which are the two hefty pedals that prove to be the heart of the system.

Both communicate with the guitar's 'brain' via Bluetooth connection, so there are no wires to speak of. One of the pedals can be used to flick through patches or turn effects on and off, while the other acts as a global wah, octaver, rotary or volume pedal depending on how it's programmed.

Effects are altered via a panel of six sliders sited on the guitar's upper edge and any changes are depicted via the display of the footswitch - an improvement on the Dusk Tiger's fiddly infrastructure.

Again, as we have no manual we are at a loss to discern other, less obvious pedal functions, but the treadle does move up and down automatically when you rotate the guitar's volume pot - one to impress your mates with for sure.

Gibson continues to encourage online communities, and includes a G-Node modular transmitter so you can hook the Firebird X up to your computer via USB. From there you can access the Gibson app store to download and share your own patches.

At the time of writing, the site had not been launched, so we're unable to report whether it works. In addition, your purchase of the guitar will allow you to download Guitar Rig 4 and Ableton 8 Live but, again, as the guitar isn't supplied with said software, we can't report on how easy it is to set-up and use.

In the traditional sense, the Firebird X feels great to play. The Robot tuning system requires a three-a-side headstock configuration rather than the Firebird's traditional six-in-a-line layout, but the standard Gibson scale length is as comfortable as it's always been.

We must say that we quite like the body shape, fashioned from chambered swamp ash, and it does sit very nicely up against your body, whether sitting or standing. We can't really comment on the swathes of chrome and old-school toggles, as they're required to make the guitar work.

But the best thing we can say about the swirly candy finish, dubbed 'Redolution', is that at least it's not the even more nauseous looking 'Bluevolution' option! It's eye-catching, if nothing else.

The nitro-cellulose finish to the maple neck and 'board is a little thick for our tastes and, if we're honest, a rosewood fingerboard would have reduced the garish factor but, credit where it's due, the Firebird X is a good player.

We suggest you charge all of the eight included digital camera-style lithium ion batteries before you start. The guitar, both footswitches and the G-Node all require one to operate. You do get sufficient low battery warnings but should any of them run out, your signal will be muted.

Having worked out how to turn the guitar on (pull the Gear Shift knob up) we first put the Firebird X through an amp, headphones and computer monitors, and it sounds promising.

The first three banks are based around conventional pickup settings and tones, and the single-coil bank sees the five-way acting as a traditional Strat-style selector would; positions two and four mimic those classic settings with impressive results.

With a hotter amp setting, the LP bank really does sound close to the real thing; with the right amp and played in the appropriate style, the neck pickup patch is virtually indistinguishable from Slash's classic tone.

There are also two SG-style sounds and a whole quintet of Firebird X tones, which should satisfy the requirements of most players.

Use the EQ to thin the SC bridge's tone to approximately that of a Tele, or up the amp gain, lower the EQ mids and use the LP bridge for a passable metal tone - remember that any changes you make to a tone can be saved to a preset.

All the modulation effects are impressive - a combination of the phaser, a touch of analogue delay and the Taj Mahal reverb whisking you straight to Crazy Diamond territory.

Each of the acoustic options impresses too. They include a J-45, SJ-200 and a 12-string emulation that, while passable through a regular guitar amp, really comes to life through a dedicated acoustic amp.

Disappointingly, however, the distortion sounds let the guitar down badly. There are six types and each steadfastly holds on to its wasp-in-a-jam-jar character no matter how diligently we fiddle with the effect, EQ and amp settings.

The Van Halen preset contains not the merest hint of brown, and as for the Royal OD… there are certainly cheaper and more efficient methods of getting much closer to Mr May's massive tone.

It's easy to get confused when switching between patches via the Gear Shift and five-way, and the display on the pedals does a great deal to help you keep track of your settings. It's more than bright enough to be seen on stage, too.

Stability niggles keep occurring, though. The tuning system is intermittent and tends to begin auto-tuning with the grey tog-pot in piezo mode, and on a couple of occasions the signal simply stopped, even though all the battery readouts were signalling full charge.

We find ourselves in familiar territory when summing up the Firebird X. It plays nicely, possesses some genuinely excellent tones and, as a technical exercise, Gibson has certainly improved on the Dusk Tiger.

However, at £3,299, will any player seriously retire their Fender Strat, Les Paul and BOSS pedals in its favour? It's hard to imagine. Such is the look of the Firebird X, its inherently complex nature, not to mention the lack of genuine customer-friendly information - Gibson's online introductory video is muddled, over-long and out of focus - this guitar is in danger of being considered an instant white elephant.

Yet that would be a shame. Maybe 50 years from now, the Firebird X will be considered a forerunner of amazing things that followed, just like the V and Explorer.

Indeed at its most basic, loading a guitar with automatic tuning, in-built effects and Bluetooth connectivity is a compelling idea. In fact the latter might be the most interesting innovation of all, particularly when it comes to recording… if the software was ready to test it properly, of course!

For now, though, the facts are these. The Firebird X is striking in appearance, very expensive and possesses sounds that are no 'better' than those available on any multi-effects processor or mid-priced amp - we'd say the onboard distortion sounds are well below that level, in fact.

It does hint at incredible things to come, and therein lies the rub. By not delivering them right now - more than five years since the HD.6X-Pro - Gibson is doing little to silence the legions of fans wondering why this iconic brand doesn't just stick to making the dribblesome Les Pauls, SGs, 335s et al, to which the vast majority of guitarists aspire, regardless of age and ability.