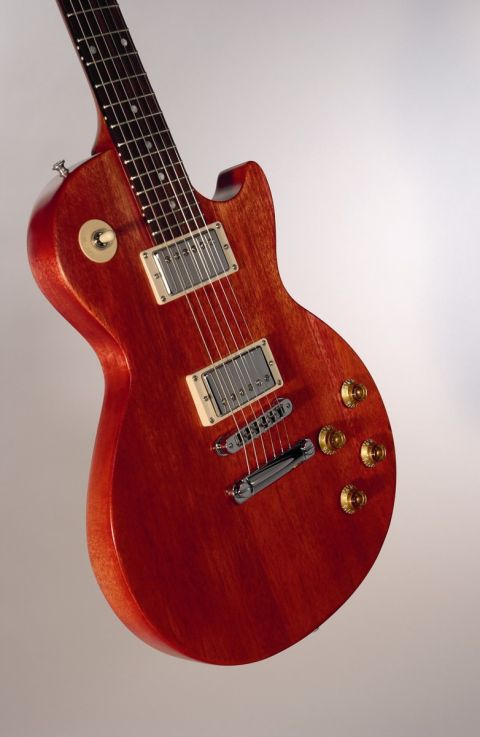 If you like the minimalist idea behind this instrument, evoking the vibe of Gibson's 'Junior' models from the fifties and sixties, then do check it out.

Fender's aged Time Machine series has been the runaway success of recent times. Initial scepticism has all but vanished and, in fact, these instruments have been received so well that several other manufacturers have adopted the idea.

Most notable of these is Gibson, with the stunning Tom Murphy aged Les Paul and SG reissues.

While it's hardly staggering that guitars like bonafide aged Strat and Les Paul remakes would succeed - after all, it was these that created the 'vintage' phenomenon in the first place - the fact that some of the more lowly models within the ranges are also getting the 'aged' treatment is a little more surprising.

Yet there's something very fetching about these Gibsons, two of them very reasonably priced indeed. So let's see if they're as welcoming to play as their lived-in look suggests…

Faded Les Paul Standard Guitars with little or no finish always seem more organic and immediate. Not only do they look as comfortable as an old shoe, but pick them up and the fingers are treated to a tactile feast: you want to run your hands across every contour and body curve, up and down the neck and into every nook and cranny.

Essentially the Faded Standard is a typical Les Paul. Gibson has used AA grade flamed maple for the heavily dished cap, to add a touch of class to what could have been a rather bland looking guitar - remember, the carving won't reflect back at you as with the gloss finished variety.

It's stained by hand to produce a pretty random sunburst effect, instead of the often rather regimented line created by a spray gun's pattern.

Some here did say it looked rather messy though. Neck, back and sides are treated to worn-looking cherry stain and then the whole thing is sealed with a very thin coat of matt finish.

The guitar's mahogany body is actually made in two halves, joined down the centre, to save on material costs.

Naturally, the finish sinks into the timber's porous grain but again, because of the non-reflective coating, this really doesn't matter - in fact it only adds to the charm of the whole thing.

Of course, the body is top-bound in cream plastic which also wends its way up the side of the Indian rosewood fingerboard that bristles with 22 medium oval frets and Gibson's classic trapezoid position marker inlays.

Fret finishing could be better. Some of the frets have just been dressed but not re-crowned afterwards, so some are flatter than others.

We'd like more attention to detail in this most important area. Gibson reckons these pickups - the new BurstBucker Pros - are the best sounding Standard humbuckers ever.

On the Faded Standard they come in the attractive 'zebra' style with no covers. Hardware is just as you would expect, with nickel tailpiece and tune-o-matic bridge, plus a set of Kluson-style 'tulip' button tuners.

The guitar comes in a choice of either 1959 or 1960 neck style. The former is a more 'clubby' affair, while the latter (as fitted to our review guitar) is shallower, which gives it that wider, thinner feel.

With the action set low, but with enough air under the strings to create the desired purchase for string bends and vibrato, the Faded LP feels good. Its matt finish is drag free, so you forget it and get on with the business of playing.

Even unplugged you know it's a Les Paul. There's that indefinable honk that seems restrained but which you know will turn into a raging torrent of tone when amped up.

And sure enough, it does. Whether it's the pickups, the all but non-existent finish or both; the Standard's sound is both hot and 'open'. The bridge 'bucker has an edgy yet solid sound that works well either clean or overdriven.

It's articulate and evokes the vintage bluesy tones we know and love, but happily kicks out snarling or even quite restrained modern voices too.

Neck position is clear and bell-like, but crank up the gain and the tone thickens, giving that perfect 'flutey' tone. Place the three-way toggle switch in the middle and you're suddenly faced with two sets of tone and volume pots.

The initial 'clanky' two-pickup sound - which is suitable for more or less anything aside from metal - can be either tamed or exaggerated, depending on where you set the controls. There's a real feeling that the light finish is adding considerably to the guitar's articulation.