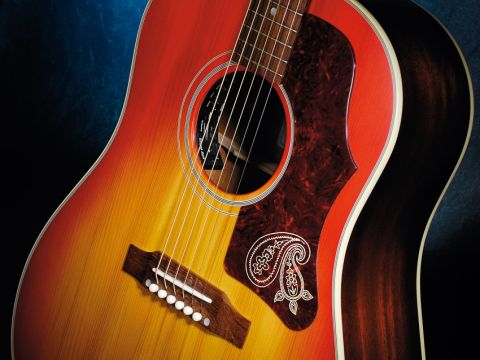 If you can get your hands on one, and you can afford it, you'll have got something very special: a Gibson J-45 par excellence.

Gibson first produced the Gibson J-45 back in 1942. Originally conceived as a replacement for the earlier Gibson J-35, the J-45 had a list price of $45. Nicknamed by its creators as 'The Workhorse', the J-45 quickly became the flagship of Gibson's acoustic range and to this day it remains its most popular acoustic model.

In terms of its notoriety, reputation and legendary status, the Gibson J-45 sits comfortably alongside Martin's square-shouldered D-28. For nearly 70 years singer-songwriters the world over have relied on the full, strident tone of the J-45.

The forums are littered with tales of unsuspecting browsers who purchased a J-45 simply because they made the 'mistake' of trying one, "just to see what all the fuss was about."

US country music sensation Brad Paisley has been a long-time admirer and user of J-45s. Among Paisley's considerable collection is a 1963 J-45, which was retired from touring duties due to being "beat-up too much". At the same time, Gibson approached Paisley with a view to creating a signature model.

Paisley had strong views on what a Gibson bearing his name should feel and sound like. "Trying to recreate the magic of that old sixties guitar was the starting point," recalls Paisley. Six prototypes later, the esteemed luthiers of Bozeman, Montana released the Gibson Brad Paisley J-45.

Our review model is one of only 300 Brad Paisley J-45s being produced by Gibson, and each one comes with its own super-snug luxury hard case complete with plush blue lining, an owner's manual, certificate of authenticity and Gibson's Gold Warranty.

Designed and built in the image of the original 1942 Legend models, the Paisley J-45 features the classic tonewood combination of highly prized Adirondack Red spruce for its solid top, coupled with a solid mahogany back and sides.

The one-piece, quarter-sawn modified 'V' neck is also mahogany and has been carved to Paisley's exact specifications. The rosewood fingerboard is home to 20 medium-jumbo sized frets; mother-of-pearl, single-dot inlays are located in the traditional positions, while the 12th fret features dual paisley inlays.

Paisley also stipulated the use of Gibson's 17-degree back-angled headstock, which it is generally agreed, adds to the guitar's overall resonance and sustain. Upon the rich, dark headstock sits the pre-war Gibson logo with the banner 'Only A Gibson Is Good Enough' across its face.

An image of Brad Paisley's signature is etched into the bell-shaped truss-rod cover, while the real thing can be found on the internal label.

There's no denying that the Brad Paisley J-45 is a striking guitar. Its classic, stylish lines, mother-of-pearl inlays, pre-war headstock and fitments, plus an oversized tortoise shell pickguard complete with engraved paisley (what else?) pattern are all arresting and appealing.

The workmanship is excellent throughout and the materials used appear of the highest quality. In short, it fits with Gibson's Custom and TV ranges; guitars that without doubt stand apart from its standard instruments.

Our only reticence lies with the cherry sunburst. Paisley specified a cherry 'burst as his original '63 is a cherry, so it seems churlish to complain, but we can't shake the feeling that the traditional two-tone brown and black sunburst would look better. While beautifully executed, it's a bit bright and, dare we say, garish: purely subjective.

While much of the guitar's design brief draws on traditional materials and construction techniques, when it comes to the onboard electronics, Gibson has gone the other way with Fishman's Ellipse Aura system.

Combining an undersaddle Matrix pickup and a sophisticated onboard preamp with imaging technology, Fishman's Aura aims to accurately reproduce the true acoustic tone of the amplified instrument by creating (in this case) four sound images. The results of this can then be blended and matched to the source output.

Interestingly, the mini-USB port on the Aura's control panel has been covered over in order to prevent users from hooking the unit up to a computer and downloading alternative imaging software from the Fishman website. In other words, 'these are the correct sounds for this guitar, don't mess with them'.

The Aura's control panel is mounted discreetly just inside the soundhole. Controls include volume and blend sliders, a phase switch for feedback control, an automatic anti-feedback on/off switch and the sound image selector switch.

It takes time to become comfortable and familiar with the controls, mainly because you'll have to work blind if changing mid-performance, but with patience and precision, on-the-fly adjustments become more attainable.

Gibson guitars are well known for having a sound of their own and the Brad Paisley tone is every inch a Gibson J-45. Its crisp, snappy, articulate and full tone is delivered right across the fingerboard.

The J-45 excels on chord work, the balanced output augmented by the narrow string spacing. It's superbly responsive too, reacting to the slightest inflection in dynamics with accuracy and bags of sustain.

We'd suggest that the Paisley J-45's greatest tonal strength, however, lies in its rich, plump bass. Without any boom or fluff, this J-45 underpins chord work with a solid, defined, low-end.

Fingerstyle requires a more refined technique than other dreads - or finger dimensions of a nine-year-old child - but to be fair, the design brief was for a proficient strummer and it's mission accomplished there.

Plugged into a Schertler combo, the guitar leaps into life as if suddenly infused with a million volts. Single-note runs are full and defined and chord work is nothing short of awesome.

While the Aura system controls do provide a credible degree of variation, the core amplified tone is bass-heavy and incredibly powerful, and as a result some of the acoustic balance is lost. The top-end needs boosting while the low-end needs taming to acquire a balanced output for strumming.

Biasing the blend to the pickup helps to retain the nuances of the acoustic tone, sliding off the centre indent toward the 'image' results in a more measured, less dynamic tone.

We're unsure if the subtleties of the four Aura variations would be sufficiently noticed in a large auditorium scenario, but they'd be welcome in a recording/studio setting.

The Brad Paisley J-45 is a beautifully made and visually stunning guitar that manages to gracefully and cohesively combine the best of pre-war Gibsons with advanced electronics from the 21st century.

Paisley stated that with this project he wanted to capture the magic of a particularly good 1963 Gibson J-45 - anyone who's played one will understand that magic. This doesn't feel like a vintage guitar, but nor does it suffer the associated price or repair issues. It's simply a superb blend of new and old.