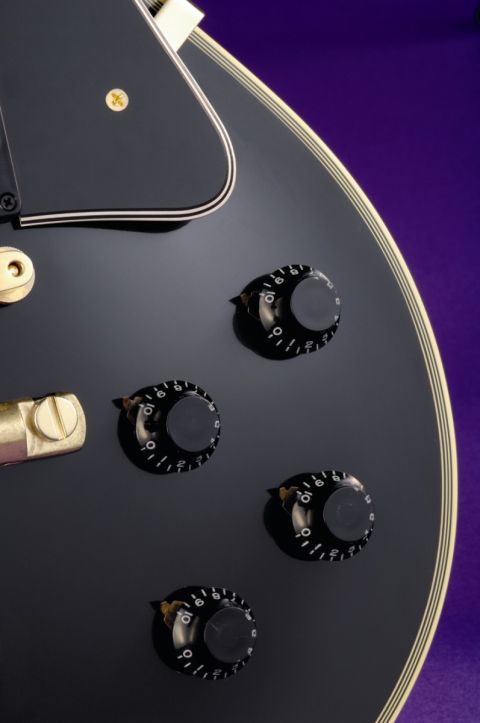 It's a Darth Vader of a guitar that could rule the universe. It's stupidly expensive, but its desirability will reflect in resale value and long-term investment potential.

Gibson has been making 'official' reissues of its Les Paul range since 1983. Even before this, there was the occasional attempt, as with 1980's Standard 80 and Standard 80 Elite, which looked good but were still miles away from the original specifications.

There had always been the occasional limited runs built for canny US dealers, who recognised a demand that Gibson wasn't fulfilling.

In the intervening 20 years or so, the instruments have got closer to that Holy Grail - in this case, the black Customs and sunburst Standards built between 1957 and 1960.

The latest incarnations, carrying the banner Vintage Original Spec, aim to up the ante even further. Not only are there one or two added vintage features, but the finish has also been given the look of a well-loved original, and so they're guaranteed to elicit a gasp of awe.

Many buffs rate the two-pickup Les Paul Custom as the best-looking electric guitar ever made, and in this classic ebony finish, there's no doubt that it's a handsome beast.

Built using almost the same materials - mainly mahogany and maple - and employing identical electrics and switching, what separates the Custom from the Standard are its upmarket cosmetic appointments.

Where the Standard is furnished with a simple cream strip around the top and fingerboard, the Custom has multiple black-and-white binding on both the top and back, as well as around its more imposing pearl-inlaid headstock.

And where the Standard's position markers are celluloid and start at the third fret, the Custom's are blocks of real pearl and begin at the first. Ebony replaces rosewood as the fingerboard material and all of the hardware is gold, rather than nickel.

The Custom VOS's finish and hardware are also mildly aged. Its white binding is decidedly yellow, the pickups, bridge assembly and Grover tuners are slightly tarnished, and the once shiny black lacquer finish has been dulled down too.

From a playability point of view, all is well on the '57's chunky neck, apart from the problem that aflicts so many Customs: where the top E string falls off the end of the fret and sticks in a gully between it and the binding. Gibson has always cut small 'lips' in the fingerboard binding of its guitars, so each fret end is covered by plastic and the tang is rendered invisible.

The idea is great and usually works well, but on Customs, the binding is thicker and so the frets themselves become marginally shorter. This means there's less room for the top string to move before it drops over the side and catches, either in the glue line or on the end of the fret itself, if the binding lip has been cut too low.

This is a real pity because when executed well, it's an elegant way to fret and bind a neck. However, when it's poorly executed, as here, it makes you seriously question a guitar's £4,000 price tag.

The Custom is a more in-your-face guitar. It's heavy in weight and its ebony fingerboard will add something to the sonic soup. This is a bare-knuckle fighter of a guitar that delights in power chords and huge riffs.