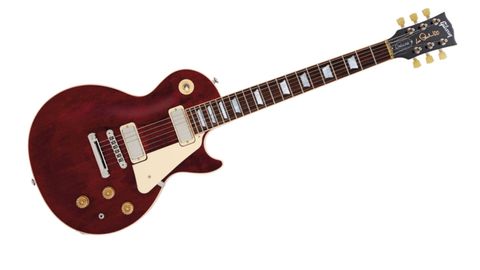 A little more niche tonally, but a great option for hot 70s sounds and 80s rock, thanks to the onboard boost.

The new line-up of Gibson's USA production guitars is full of change. Are you ready? First off, the Tronical-designed Min-ETune 'robot' tuning system has been rebranded as the G Force Tuning System and is standard - not optional - on all the guitars, with the exception of the Derek Trucks SG and Firebird.

All the models have proper gloss nitro finishes and come in a new-design TKL moulded case; each has a Les Paul 100th birthday signature on the headstock; there's a new 'improved contact' output jack and "more robust cables" for a "stronger signal strength", and each guitar also has a small Les Paul hologram sticker.

The Deluxe also has an upgraded Tune-O-Matic bridge with titanium saddles and new mini humbuckers for "improved tonal balance and coil-splitting versatility".

As the price reflects, this is a more deluxe upgrade but it drops to the lowest C grade maple top, as it's offered either under a very cool-looking Wine Red translucent finish, as reviewed, or completely opaque Gold Top or Pelham Metallic Blue. That said, there is a 'burst option that will be very plain-looking, like those Deluxes of the 70s: not everyone wants figure and flame.

Weight relief is the earlier nine-hole variety, and designated as being 'low' density mahogany for the back, although it's still one of the heavier Les Pauls in the new range. The top's contour is 'classic', noticeably more dished than the 2015 Studio, plus we have cream binding around the top edge and the fingerboard.

Gibson has retained its standard string spacing at the nut and bridge (36.5mm and 50mm respectively) but increased the actual width of the neck, so the nut width, depending on profile, is approximately 45mm wide and the width at the 16th fret neck join is a little over 57mm.

The profile is 'rounded asymmetrical', putting meat on the bass side (21mm at the 1st fret, 24.6mm at the 12th) and some overall girth further up the neck.

The new-design mini humbuckers - that use Alnico V magnets with steel-blade pole pieces, hidden under nickel-plated covers - have a hefty DC resistance, quoted as 26k ohms for the bridge and 17k for the neck; they have standard coil-splits, too, voicing the inside singe coil of each pickup and they are fully hum-cancelling in the mixed position.

Finally, we have the active level boost (with adjustable gain on the circuit board to set and forget), meaning we drop down to a master tone control plus two volumes, both with pull/push switches to engage those coil-splits The hardware is nickel-plated.

For all the forum inches devoted to pricing, the rebranded Min-ETune and that script logo on the headstock, the most striking aspect of this instrument is the way its neck feels in your left hand.

With its pleasingly chunky neck profile, the Deluxe is the very comfortable to play, but the mini-humbuckers are initially a little underwhelming compared to the authoritative punch and bite of the recent Studio's 57s - especially as it's almost double the price - but, hold your horses, there's the small matter of that gain boost mini-toggle to consider.

Flip that switch and you'll be sorely tempted to snap it off, leaving it permanently engaged; suddenly, there's a red hot firecracker of a guitar in your hands with a satisfyingly crisp high-end and huge output (though you can tame this internally should you need to) that's great for anything from Mick Ronson tones to hot-rodded 80s hard rock.

As usual, new Gibsons arrive with no shortage of talking points, and there are plenty here to alarm the purists - not least that if you want to buy a new Les Paul Standard that doesn't have a brass zero fret, board-mounted components, G Force tuners and non- traditional fingerboard dimensions then you'll have to shell out at least £3,199 for the 'entry-level' Gibson Custom Plaintop R8.

However, our recent conversations with Gibson indicate that the company's 2015 USA models simply aren't aimed at the same players who lust after vintage accuracy - onboard self tuning, more beginner-friendly fretboard dimensions and the like are symptomatic of a conscious decision to appeal to a new generation of guitarists.