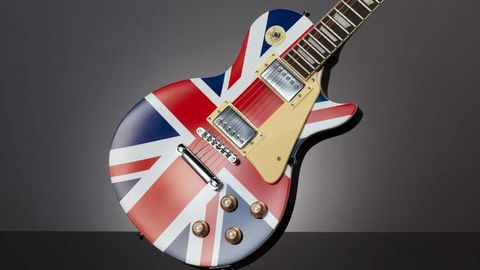 If you're after a singlecut then this is a good starting point, and there's no denying the Gear4Music Electric-GB is great value for money, but there are set-up issues that need to be addressed before this can be considered a serious contender. Take a look at the competition and see how they compare before you take the plunge.

There's no denying it, most low-to-mid priced guitars take their influence from Fender. Gibson fans usually have to look a little further before they find anything with Les Paul leanings, so it's great to see Gear4Music offering what appears to be very well-spec'd take on the singlecut design for a under £150.

The Electric-GB is more than just a generic budget guitar cut to different template: Gear4Music seems to have recognised what makes a singlecut great. For starters, a basswood and maple body gives this six-string a solid and nicely weighted feel.

Our review unit is finished with a Union Jack graphic (it's also available in Black and Sunburst), which seems to have been applied well, with bold colours and no visible flaws. The same cannot be said for the back of the guitar, though, which has some patchy sections in the black finish.

Also disappointing is the cream-coloured scratchplate, which looks cheap. This needn't be a deal breaker, however - you could simply remove it and the guitar would play just the same.

The chunky, C-profile neck is maple topped with a rosewood fingerboard and 22 frets. The neck finish and quality of rosewood feels great to play on, but there are a few frets that haven't been polished properly. The set-up on our review unit was also a bit suspect, with a spot of fret buzz, particularly on the higher strings.

The rest of the hardware is of a decent standard - the tuners and bridge feel rock solid and dependable when put to the test.

When played unplugged, the Electric-GB's basswood reveals a mid-range that sounds similar to that of mahogany, the wood of choice in more expensive singlecuts. Add to that a decent sustain thanks to the slightly thicker-than-usual body and you've got the makings of a decent sound.

Plug in to a clean channel and a classic humbucker chime rolls out, rounded and mellow on the neck humbucker, bright and crunchy on the bridge. Warm your sound with a bit of overdrive and that neck humbucker evolves into a soulful blues machine, crunching up nicely while maintaining the lean sound. Slash fans on a budget will be very happy, here.

The bridge works well for saturated chords while still keeping reasonably clear and detailed. Ramping up to high gain generally works well, too; pinched harmonics fly off the lower strings with ease. Dialling in too much gain on some amp modellers can muddy the sound, but this is easily solved by keeping an eye on your amp controls.

Weigh up the competition

The Electric-GB is a dependable and generally impressive guitar for the money. It's tarnished by cosmetic flaws and set-up niggles, but the playability issues can be rectified with a little attention. There's plenty of competition in this area so we'd suggest checking out comparable singlecuts before settling on your new axe.