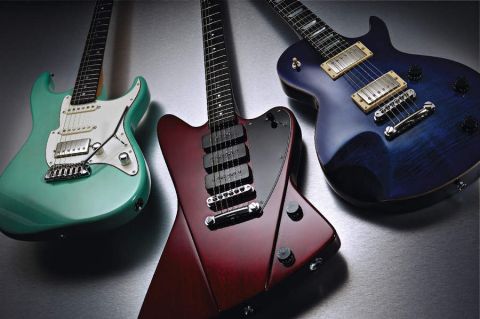 A well-built, modern single-cut that punches above its price in terms of spec and sound.

The Eclat has a distinct Les Paul-ish vibe.

The 2008 Fret-King range is split into the Korean-made Blue Label guitars - effectively a replacement for the EU range - and the small-number UK-made Green Label.

It's early days for the latter, but the Blue Label range is up and running. Let's take a look at the Eclat Standard...

The Eclat takes its name from a Lotus car. Car names feature heavily within Wilkinson designs: his Italia designs use Ferrari names.

Its inspiration, however, is more direct: a melding of Gibson's Les Paul with PRS's Singlecut and a soupcon of Wilkinson tweakery.

Les Paul-like in outline and girth (including a full depth 60mm thick body), like so many modern Les Paul-alikes it avoids all the 'litigation' features and you'll see here a slightly concave upper shoulder, a PRS-like belly cut on the back and a concave forearm scoop that cuts through the 19mm bookmatched figured maple top into the African mahogany below.

Designed to give your forearm more comfort in a pretty standard playing position, it's the most provocative feature of the guitar.

Another (PRS-like) scoop on the treble cutaway continues the differences between this and the Les Paul, and more PRS influence is obvious with the natural unbound edge and the slightly curved heel.

To be fair neither do much for upper fret access but then single-cut players are used to such compromise.

The neck profile is chunky but well shaped. The fingerboard edges are unbound and similar beefy frets create a solid, workmanlike feel, although here Gibson-like crown inlays are tidy enough but seem like an afterthought - as if Wilkinson has run out of his usually highly creative motifs.

Not so the headstock, which adopts a pretty classic Gibson-like vibe, more Junior than Standard, but with a single radius to the top dome and a neat scoop to add a little difference and class.

Hardware is by Gotoh (nickel-plated, as opposed to the chrome on the Esprit) and includes a lightweight aluminium stud tailpiece and vintage-style tuners.

Dual Fret-King PAF-style humbuckers feature unplated solid nickel covers (yes, they will tarnish!) that are wound to a recipe given to Wilkinson by the Gibson humbucker designer Seth Lover.

Controls are simplified to a master volume very close, Strat-like, to the bridge pickup, a 'Vari-coil' control that gradually turns the pickups simultaneously from full humbucking to single-coil and a standard tone.

The Eclat feels big and more bruiser-like, just as it should, and strapped on our reservations about the scoop are confirmed.

With a fairly classic strap position over your groin, unless your right hand stays over the bridge pickup and the guitar sits fairly centrally, your arm will more than likely rest on the guitar's edge just before the scoop.

Higher strap positions make more use of it but we're not convinced that it's truly bringing anything to the table in either comfort or appearance.

Sound-wise there are fewer concerns. It's definitely on the brighter side of the tracks and lacks some of the velveteen all-enveloping low end of, for example, a similarly weighted PRS Singlecut.

But credit where it's due, this guitar is less than half the price of a PRS Singlecut and it most certainly isn't half the guitar.

The bridge and neck pickups are well balanced and the extra brightness gives a little more clarity to the neck pickup's voice, while with both on there's a sprightly character to the softer mix.

The Vari-coil knocks out the slug coils and most of the action happens at the tail end of the pot's travel - there's very little between full-coil and split-coil in terms of graduation.

But the single-coil voices work well, especially with both pickups on or for a more Fender-y neck pickup sound.

But some of us may prefer individual volume controls and perhaps a coil-split pull/push on the tone control to evoke more sounds from the guitar. Overall, however, it's a very good performer.

The Eclat is a well-conceived Les Paul-alike with a good tone and added versatility via the Vari-coil control, but that forearm scoop is challenging.

While its weight suggests a more hard-rock metal sound, it seems to have a more classic voice. Perhaps there are two guitars here struggling to get out - as PRS found with its Singlecut. But, it's still a very good guitar.