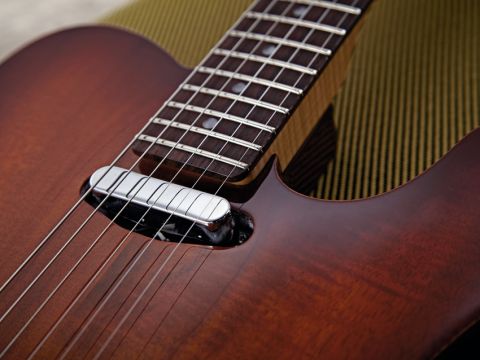 A sort of grown-up take on the Telecaster. Great feel, weight and Tele-plus sounds.

A cursory glance at the new Fender Select Series guitars will tell you these aren't like other models in the Fender canon.

Carved tops and flamed maple are rarely seen on Fenders outside of the Custom Shop, so what gives? We asked Fender's marketing director, Justin Norvell, to explain.

"The rear single-coil has flush magnetic slugs and the neck pickup looks typically Tele-like, although even before we plug in, its DC ohm resistance hints at something a little hotter than you'd expect. "

"The concept with these instruments was to split the difference down the middle between traditional and super-modern," says Norvell, "where it is less about technical wizardry and more about
using the best materials available to create a great-playing instrument.

"We've been building for 60-plus years, and wanted to create a series that was the best of the best from a production (non-Custom Shop) standpoint. We use the best woods, weight tolerances, new pickups and so on.

"Something to really stand at the top of the line as 'the best'. Whereas the Deluxe Series is very modern, and the Vintage Series is very vintage, the Selects offer the best elements of each."

This new Tele adds an unusual spin. The 38.5mm-thick back wood is lightweight empress (see p28 for more), which has a wide-looking, almost pine-like grain visible under a deep cherry finish.

It's topped with a two-piece centre-joined and book-matched spread of koa, bringing the overall depth to a bulky 53mm. The top carving is quite subtle and elegant and the faux edge binding is nicely done; the koa's natural brown colouration provides only subtle contrast with both the top colouration and back wood.

Another surprise is the inset Tele control plate, which slightly bends over the body's contours. Likewise the Tele-bridgeplate, although here it's of a more modern style without any sides, just the upturned rear lip to hold the six Strat-style bent steel saddles - as usual, strings load from the back.

The rear single-coil has flush magnetic slugs and the neck pickup looks typically Tele-like, although even before we plug in, its DC ohm resistance hints at something a little hotter than you'd expect. Controls are standard too aside from the no-load tone control, which has a definite notch at the top end of its travel where it's bypassed from the circuit for full treble.

Aside from that, it's very similar to its stablemate the Select Strat HSS, which we tested at the same time: the neck is virtually identical although here it's flamed maple, diagonally sawn so the flaming is more prominent on the bass side.

We plugged in our reference '69 Tele and not surprisingly, bearing in mind the guitar's construction, bridge and pickup differences, the Select model gives (yet) another Tele flavour.

We have a more open mid-range and subtly expanded low- and high-end. The no-load tone certainly enhances that high-end and we were happier with it rolled off a little where the more open mids and juicy lows create a nice thickness without it sounding over-hot. By using both the volume and tone, it soon proves to be a little more versatile than a standard Tele.

It's the neck pickup that surprises though, with a tougher output and more attacking highs - unless you pull down the volume and tone. The mix sounds more contemporary too, a little more 'produced' perhaps, but in a good way.

There's Tele-tone aplenty here but it's less uncompromising - a Tele, then, for the player who owns more guitars and needs to cover a broad stylistic range.

As a middle ground between vintage and the more modern Deluxe specification, the Select fits in well. This early examples did suffer from a couple of issues, not least sharp protruding height adjustment saddle screws, which felt a bit too vintage for us - and the lack of any options, not least colours, may polarise opinion.

Having said that, this is a fine, lightweight and characterful guitar. The Carved Koa Top Telecaster is a rather special blend of styles with a different but very usable and versatile Tele-based tonality.