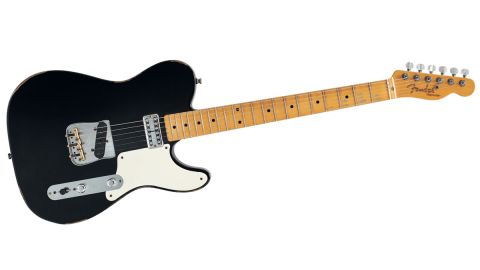 Yes, just another Telecaster. But, heck, what a Tele!

The Tele Caballo Tono - the name apparently translates to 'Tone Horse Tele' - is a diverse bitsta, and is part of this year's Limited Edition series.

With a two-piece alder body and one-piece quartersawn maple neck/fingerboard, its black Relic finish doesn't seem as trashed as many of the Custom Shop's ranges.

The white single-ply pickguard displays its Cabronita DNA, which continues with the TV Jones Classic neck pickup that's screwed down hard onto the body with no intended height adjustment.

It's paired with a hand-wound Custom Shop Texas Special bridge pickup and standard Tele control setup with the addition of the 'Greasebucket' tone network. Of course, the control plate is reversed here to add another modded spin.

We get a more modern, flatter fingerboard radius in line with a typical re-fret scenario - here, the 'new' wire is slightly smaller (in Dunlop-speak, 6105 as opposed to the AP's 6100), but it's still pretty big compared to original-spec thin wire.

The neck is glossed (with the exception of the nice-feeling worn neck back) and the fingerboard face gives the impression that the re-fret has happened more recently - the only visible wear being on the top four frets.

The outer two saddles are machined with bullet-like ends; the middle one looks like a two-piece design, but it's just some clever machining.

This Tele has that direct honk from the bridge and a soft, slightly muted neck voice. It sounds humbucker-like, but we're on the low output side of the tracks and it's the balance that's all-important, with the TV Jones bringing a touch of rubbery thwack to the bass notes, and warmth without too much cloud to the highs.

Comparing it with a more standard Tele neck pickup, the TV Jones has more clarity. It's really touch sensitive, too, which works with your amp and pick attack to create a very dynamic and complex voice.

But with a level boost it edges into a more tube-like vocal lead tone. Wind the gain back a little bit and hit the bridge pickup, and the Tele's grinding, grainy sparkle comes to the fore.

The Greasebucket tone control is more selective with what it's removing. Whereas a more standard treble-cut tone control removes progressively not only the highs but mids, too, leaving a very bassy, muffled tone (obviously depending on the valve of capacitor used), the Greasebucket dials in on the upper frequencies that, as you reduce it, bring down the highs and seems to progressively pull down the mids.

It means that in the middle travel of the pot there are some interesting mid-focus tones, which work really well on more gained sounds, or just knocks the spike off when played cleaner. How much fun can you have?

If you just don't get the pre-aged Relic thing, well, chances are you gave up reading this a long time ago! If you do get it, however, be prepared to pay.

This isn't cheap and on this Tele, presumably, the non-Fender neck pickup and non-vintage-style hardware mean it all adds up. But if you check out the numerous other 'relics' out there - e.g. Gibson Collector's Choice #18 1960 Les Paul 'Dutchburst' - it doesn't seem over-priced, does it?