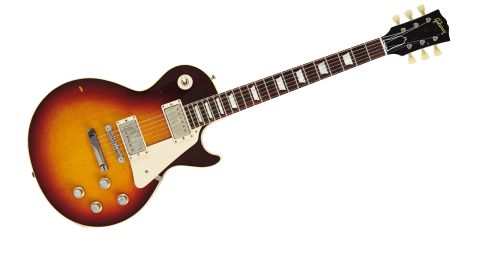 Prohibitively expensive, but one of the most droolsome guitars we've seen.

The Collector's Choice series recreates actual instruments - some famous, some simply awesome. The Dutchburst pays homage to a 1960 Standard that lived its working life between the Low Countries and the high seas...

While the Historic Les Paul reissue has been around since 1993 and has undergone numerous changes and upgrades during that time, the desire for the perfect 1958 to '60 'clone' has been around much longer.

This reviewer worked for Gibson when the fabled, but ultimately inaccurate, Standard 80 and Elite models surfaced in 1980. But even prior to that time certain US dealers, concerned that then current Les Pauls were a far cry from their origins, had been ordering 'custom' runs with narrower headstocks, better body shaping and more accurate binding detail. And when Gibson finally got it together to do its own official 'reissues', a vast font of knowledge had accrued.

Experts such as Edwin Wilson and Tom Murphy pooled years of expertise, making each incarnation better than the last. Be it introducing the long neck tenon, using 'bumblebee' capacitors, ever more accurate shaping and colour of plastics, or improved pickup voicing, the reissues we see today represent the pinnacle of those years of toil.

Or they did until now. For Gibson has recently gone a stage further. The Collector's Choice series presents a limited-edition run recreating a specific '58 to '60-era instrument.

Each is numbered, and limited in quantity by the availability of timbers good enough to make as near-perfect a match as is possible when using living species such as maple, mahogany and rosewood.

The instrument we have for appraisal is Collector's Choice #18, known as 'Dutchburst' due to its own unique history.

The thing about any good vintage guitar is that it has a story to tell. The Dutchburst is no exception. Ordered into Holland in this beautiful dark Sunburst, it was bought by a professional guitarist (we know him only as 'Jan') who played jazz in his trio, mainly on cruise ships. You could say it worked its passage! So what we have is a replica of a working instrument, with battle scars to prove it.

That said, it was clearly cared for - as any 'tool of the trade' should be - with wear marks coming from hands flying up and down the neck, over the body and around the controls.

The Dutchburst is about 'use' not 'abuse'; one can almost picture our jazz hero finishing a gig, wiping down the strings, cleaning the neck and polishing the top before placing it respectfully in its case for the night.

And that's one of the things that we like so much about Ol' Dutch: it has not been dulled down as so many VOS models are. Old guitars actually don't go dull. If anything, they get even more shiny where the lacquer remains and has been looked after.

Here, the mildly flamed maple ripples understatedly beneath its moody 'tobacco fading to burnt umber and caramel' finish, while the nutty-coloured mahogany back, sides and neck glow under a patina of simulated age.

It's interesting to assess each dent, ding and wear mark and imagine what went into creating it. What songs did Jan play? We presume it was the jazz/pop repertoire of the day. Did the lack of finish on the lower rim reveal that he played seated? Does the wear on the back of the neck mean he wrapped his thumb over the top? Or played mostly in the jazzy key of Bb?

The aging does look convincing, although one hawk-eyed Guitarist pundit pointed out that some edges of the worn areas have a distinct 'step', rather than blending smoothly into the bare wood.

Without seeing the original we can't say, but Gibson finish can flake, as well as wear through, and this does leave this kind of ridge. The Dutchburst looks so good that we'll offer the benefit of the doubt.

The fingerboard is an attractively dark, single slab of Indian rosewood, but as ever would benefit from a light oiling at the first string change.

Regarding the guitar's nuts and bolts it's as you would expect: twin Custom Buckers (scatterwound as per the original units), a lightweight aluminium stud tailpiece with ABR-1 bridge, aluminium strap buttons, Kluson-style 'green button' two-ring tuners and a stepped-edge black-on-white truss rod cover.

The pickups run through the standard Gibson complement of two volumes and two tones (the words suitably worn off the inserts of the gold top-hat knobs). The aforementioned, vintage-style 'bumblebee' capacitors complete the picture.

As this is a recreation of a 1960 guitar, it boasts that era's shallow neck profile. While some prefer the meatier '59 shape, or the even beefier '58, others will relish this slinky sliver of mahogany.

Several here who usually revel in the bigger neck experience have picked it up and remarked: "Actually this is really comfortable." It's light, too, coming in at a meagre 3.2kg (8lbs), so you should finish the gig still standing.

What is most interesting is how the removal of a couple of millimetres of wood near the heel lets the fretting-hand thumb tuck further in, allowing the fingers slightly better access to the upper frets.

Playing 'blues box one' at the 17th fret is not quite the usual struggle, and may well be enough to turn the staunchest fat-neck fancier's head. Gibson's setup is impeccable, too, aided no doubt by the Plek system that optimises nut-slot depth, fret profile and string height.

We've tested guitars loaded with Custom Buckers before - notably 2013's R9 - and they don't disappoint. The thing about vintage Les Pauls is that they were sweet-toned animals from which you could tickle tones, but then, with the crank of a volume control or the kick of a pedal, push them into beautiful, natural overdrive.

While Dutchburst lacks the luxury of 50-odd years of natural 'tone ageing', Gibson's ongoing nips and tucks mean it's a lot closer to an original than those Standard 80s and Elites of 35 years ago. All the clichés apply: expressive, dynamic, woody, powerful-but-not-mushy, bright-but-not- piercing.

And if you've ever watched Gary Moore turning his neck pickup down to two or three and 'whispering' to you through his Les Paul, then flicking to the bridge and cranking it to 10... that's what you have here.

Having spoken to top Les Paul dealers, it seems that Gibson's prices, while scary to most, don't deter those who love them and are fortunate enough to be able to enjoy them. And the work that's gone into the Dutchburst and the other Collector's Choice models is always going to be reflected, cost-wise. So, like it or not, it's a fact of life.

But what do you get for your almost six grand investment? Well, exactly that. These guitars are likely to hold their value and even increase with time. More importantly, it's a great musical instrument that demands to be played. Let it languish like a museum piece and you'll be betraying the man who made it the instrument it is today.

If you're a guitarist who gets the whole vintage thing - and we unashamedly do, especially that glorious tobacco hue - a guitar like this is a joy to behold, a thrill to play and exhilarating to hear. And let's face it, put another dent in it and who's to know?