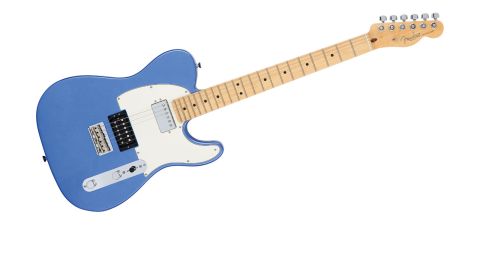 There are fat rhythm tones aplenty to be had from this slinky player.

Although Fender has resisted the temptation to 'do a Gibson' and ring dramatic changes for 2015, the company intends to make its American Standard instruments a major focus for the year ahead, including this Telecaster HH, launched at the close of 2014.

Whatever the motivation, it's clear that this new HH guitar offers the same blend of vintage and modern features that characterises the American Standard range, but throws in a different sonic flavour aimed at those with rockier leanings.

The Tele HH comes loaded with a pair of Fender's Twin Head Vintage humbuckers, and embraces the aftermarket hot-rod aesthetic even further with its uncovered bridge unit.

Designed for Fender's top-tier production guitars - the Select Series - and first appearing in 2012, Twin Head humbuckers have been available in Vintage and Modern incarnations as standalone units for retrofit purposes since early 2014.

The Alnico V bridge unit has a pokey DC resistance of 10.5k ohms, with the Alnico II neck pickup weighing in at a more restrained 7.3k ohms. They may be Vintage by name, but the Twin Heads here are no slavish PAF clones; thick aluminium base plates are designed to reduce magnetic interference, while a solderless PCB hook-up at the rear is a nod towards modernity.

The guitar is a pleasing middleweight when strapped on, with the belly cut giving it a more svelte feel than the slab bodies of old.

The jury is still out on whether a Telecaster 'should' be cut for comfort in this way, but Fender attempting to slim down the backside of a double-humbucker loaded Telecaster is nothing new; this was a feature of the Deluxe in 1972, after all.

In common with the love-it-or-loathe-it 70s Deluxe, the American Standard Telecaster HH also features a Strat-style six-saddle hardtail bridge. It's well-behaved, but quite removed from the look and experience offered by an old- school 'ashtray' unit.

Like the rest of the American Standard electrics post-2012, the guitar here features staggered-height tuners that negate the need for a second string tree for the D and G strings. A reduction in friction usually equates to an increase in tuning stability, and the instrument is reliable in that regard.

Set up with 0.009-gauge strings at the factory, playability is as easy and fluid as you'd expect in combination with bend-friendly medium jumbo frets and a 241mm 'board radius.

One thing to watch out for in the heat of battle is that the relatively high string tree in combination with a light high E string means that there's not a huge amount of tension over the nut and, when strummed hard, the string can pop out from under the tree and out of the nut slot altogether as a result.

Those of us with a heavy right-hand technique are likely to prefer heavier-gauge strings - the extra tension of which should counteract this - but it's something to consider.

In addition, there's the satin-finished, slim modern C neck profile that's a fixture of the contemporary Fender catalogue. That said, it should be noted that the gloss-finished fascia of the Tele's neck has some pooling around the frets, which slightly widens the fret size and reduces the height of the fret above the playing surface, as it did on the American Standard Stratocaster we reviewed back in 2012.

It's a low and slinky feel; however, if you love the Tele but prefer the rawer feel of an unfinished rosewood 'board then you have options.

When is a Tele not a Tele? Despite the decals on the headstock and body outline, there's very little tonal crossover here with the first instrument to bear Leo's surname. That's not necessarily a criticism, of course; if you want a more traditionally appointed Tele you are hardly short on options.

That said, for players used to the explosive dynamics of single coils, even on the bridge pickup with the tone control wide open, there's a thick midrange and soft high end exhibited that even had this die-hard ES-335 user reaching for his amp's tone control to dial in more treble.

We'd argue that Fender has perhaps missed a trick by not including a five-way switch with coil-split options in the in-between settings - especially when the Saint Blues Juke Joint Mississippi Bluesmaster reveals just how much range well-sorted coil-splits can bring to an HH guitar.

The combination of the Tele's uncovered 'bucker and hardtail bridge give it a little extra punch. It's still thick, though, and as such makes for a great riff-rock rhythm guitar.