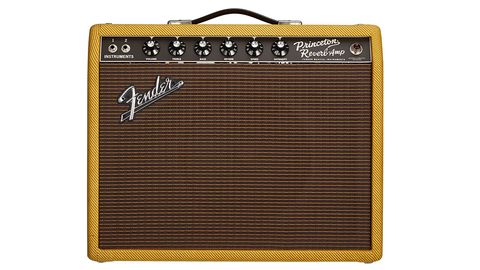 The Princeton is relatively expensive compared with the competition, but the build quality and finish standard is very good, while the sound both is world class.

While digital modelling and modern multi-function amps continue to be popular, there's a growing move back to vintage heads and combos, powered in part by a boom in high-quality outboard pedals with increasingly realistic valve overdrive simulations.

"I just want a good basic amp, with a good drive pedal" is a request we're hearing all the time now, and what better place to start looking than Fender's catalogue, which has two ideal candidates in the shape of the '65 Princeton Reverb and '65 Deluxe Reverb reissues.

This is truer now than ever, as Fender has just announced new limited factory special edition versions of both models, with enhanced cosmetics.

Today, we take a look at the Princeton.

The Princeton Reverb is expertly fitted out in lacquered tweed livery, with a Bassman brown/gold speaker grille. Not so obvious at first glance is the colour co-ordinated dark brown control panel and the carry handle, which are both nice visual touches.

Front and rear panel layouts are quite faithful to the originals, with high-and low-gain inputs feeding volume, treble and bass controls, plus a level control for the valve- powered spring reverb and speed and intensity controls for the vibrato effect, which is actually a tremolo, of course.

As you might expect after half a century, the electronics are different. The originals were built up using eyelet boards, a rectangle of fibreboard with rivets stamped into it at strategic points into which the components are soldered, with a separate can on the top of the chassis containing all the main filter capacitors and a valve rectifier.

The modern version retains the valve rectifier but use single-sided printed circuit boards for all the small components - one large board holding preamp, power amp and power supply stuff, with ribbon connectors to two smaller boards that connect the front-panel inputs and controls. We're not generally big fans of this type of PCB for valve amps.

However, on this model, Fender has handwired the valve bases, keeping all the heat away from the boards for much-improved reliability.

As a result, there's a lot of wiring and soldering inside, and it's generally quite clean and tidy, with the valve AC heater supplies twisted and raised above signal leads to reduce hum. With so much handwiring already inside this amp, it begs the question: why doesn't Fender go the whole hog and use eyelet boards, as it did with the originals?

The amp uses a valve rectifier, and in common with all such designs, it takes a few minutes for the voltages to ramp up and stabilise properly.

Plug in, and you're immediately transported back to Fender's golden years; the amp has the sugary sweet clean tone that's recognised all over the world as the classic 'blackface' Fender sound, with a less aggressive midrange than their earlier 1950s tweed counterparts, and an airy, multi-layered treble thanks to the characterful Jensen drivers.

The amp delivers a thoroughly addictive tone that flattered every guitar we plugged into them. The low output wattage means they're easily pushed into overdrive, with a subtle edge at around six on the volume controls when used with a regular-output Stratocaster; slightly less when a Les Paul was plugged in.

The reduced frequency range of the Princeton's 10-inch driver is a positive asset for recording, making the sound sit in a mix that much easier, with little or no EQ or compression tweaking needed.

After a few hours of use across a variety of different musical styles, it's easy to see why this amp was a favourite for some of the world's top session players.

The Princeton's 10-inch speaker and lower wattage make it easier to induce crunch tones. The valve-powered reverb is superb - noise free, with a huge range from soft ambience to full-on surf, while the vibrato/tremolo effect goes from deep, slow pulses to almost LFO territory.

The Princeton's compact size and juicy low- volume performance make it a shoo-in for a desirable home studio amp. The tweed is easy on the eye, too.