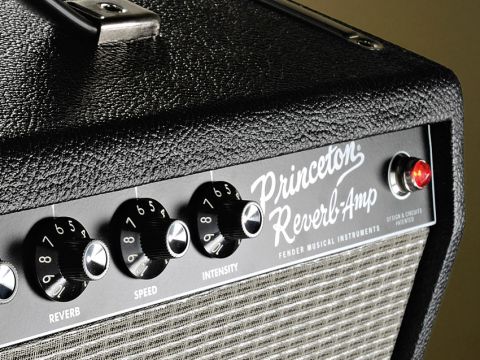 A great retro combo at a reasonable price.

As with Fender's wonderful Deluxe, the Princeton was one of the very first amps Leo made under his own name - dating all the way back to 1946 - and one of the few model names to remain in more or less continuous production, seeing out Fender's less well-known 'Ivy League' amps, the Yale and Harvard.

Everyone has their own favourite version of this wonderful small amplifier, and at the risk of offending some of the tweed fanatics out there, we reckon that with this reissue of the reverb-equipped 1965 variant Fender has probably picked the one that's garnered the most praise over the years. It combines the classic good looks of the pre-CBS 'blackface' with the mis-named Vibrato effect and that great spring reverb.

Originally intended as a smaller, more portable combo for practice and beginners, the Princeton Reverb quickly found its true calling in the hands of studio players and, along with the tweed Deluxe, is probably one of the most recorded amps of all time.

Like the original, this re-issue has a smart, perfectly proportioned cabinet covered in thick black Tolex, combined with a silver sparkle grille cloth and black control panel with six skirted control knobs for volume, treble, bass, vibrato speed and intensity and depth for the reverb effect.

It's the classic 'blackface' style and looks undeniably handsome - less vintage than tweed maybe, but classier; the amp for dinner dates and cabaret as well as those down-home blues or country pickin' gigs.

Also just like the original, this reissue sports a small but solid steel chassis, to which all the valve bases are directly bolted for strength, reliability and easy changeovers. Inside the chassis, the electronics are all PCB mounted on single-sided boards which are not through-plated - there are two small boards for the input jacks and rotary controls and one large one for everything else, with connections to the valve bases made by short flying leads.

This is quite a bit different from the originals, which used eyelet board construction, where components are soldered into small brass rivets which are in turn strategically hammered into a vulcanised fibre baseboard. This traditional way of building the Fender amplifier survived up until the mid-eighties when the Fullerton production line closed, and is now restricted to Custom Series models like the Tweed Deluxe.

The Princeton's component values appear to be similar, however, the PCB layout is of necessity substantially different from the AA1164 circuit used on original Princetons of this era.

The rectifier valve has also been changed, from what would have been a 5U4 to a 5AR4, which is actually not a bad thing for the amp overall as the latter is more efficient and kinder to output valves because of its controlled slower warm-up time, gradually building up the high plate voltage.

By comparison a 5U4 would lower the voltage a little and reduce output accordingly. However, if you're tempted to experiment with a 5U4 we'd say don't - despite the forbidden promise of more 'sag' at a slightly reduced output, a 5U4 will draw higher filament current which the reissue power transformer probably wasn't intended to handle.

The all-important loudspeaker is a Jensen C10R - a reissue of an original type that was one of several used by Fender on its small amps and so quite authentic, as is the supplied footswitch, which toggles the reverb and vibrato effects.

Hear Guitarist's Dave Durban put the Princeton through its paces:

If the tweed Deluxe created the legend of Fender's giant-killing small amps, it was the Princeton Reverb of the 1960s, along with its slightly bigger brothers the Deluxe Reverb and Vibroverb, which cemented it into history and inspired many players and at least one other renowned amp builder to a higher creative plane.

Classic blackface tone is less midrange-biased than the earlier tweed amps, with a shimmering treble and powerful bass that pushes out of the speaker. Helped by a big dose of reverb, this should expand to build an illusion of solidity - almost as if the notes are hanging in mid-air.

The reissue Princeton does a very good job of delivering this tone and with the volume controls wound up you begin to understand why this was another amp that became so popular among blues and rock players, with a fat, toothsome overdrive and rich, harmonic-laden sustain.

It is also very loud for an amp that's rated at a mere 15 watts. But it's in that elusive 'nearly clean' distortion area that the Princeton rules, with a seductive touch sensitivity that lets you make the guitar growl or bark on demand, while a gentler attack returns you to the subtle chiming clarity these small amps are known for.

The reverb is good - actually very good compared to a lot of other amps in this price bracket - though we feel it's a touch too crashy and bright compared to an original.

The vibrato circuit is superb, with just the right edge to the waveform and a nicely judged range of speed and depth, taking you from a Leslie-style fast wobble to slow, atmospheric pulses which combine with the reverb for some stunning, almost ethereal effects.

Oh yes - we mentioned that the effect is misnamed. Vibrato in musical terms means modulation of pitch, whereas the Princeton's circuit modulates volume. It's actually tremolo, but Vibrato is what Fender has always called it so who are we to disagree?

Overall, the Princeton Reverb's tone is pure retro Americana. Beyond any doubt, the original Princeton Reverb was a classic and it's hardly surprising that even an indifferent original will now set you back well over a thousand pounds.

This reissue compares well, although we'd have to say that given the amp's historic status we're surprised not to see it alongside the '57 tweed Deluxe in the Custom Series, albeit glad that it exists in the more competitively priced Vintage Reissue section of Fender's catalogue.

It's hard to find genuine competition for amps like this - if you want you can spend two or three times as much on equivalents from the boutique builders, or take a risk on the second-hand market.

For the same money there are amps that come close to the Princeton's soulful tone and spacey reverb, but very few have the extra ingredient of Vibrato. So we reckon the Princeton is good value for money if you're after a vintage amp with modern reliability, as long as you can live without the bells and whistles of a flashy modern design. Grab yourself a very toneful piece of history.