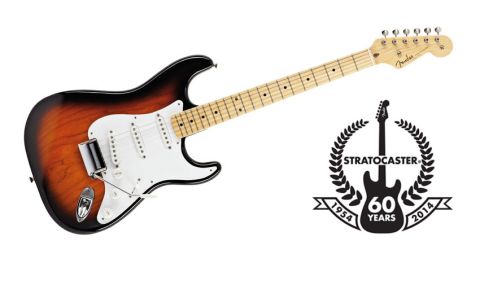 This is where it all began - there wasn't much wrong with it then, plus it's even better-built now.

60 DAYS OF STRAT: Here's where it all started! Although looking like any other Two-Colour Sunburst, maple-necked Strat, the Fender's 60th Anniversary American Vintage 1954 Strat differs in certain respects. The headstock edges are rounder, as are the pickup edges; the polystyrene knobs and selector-switch tip are slightly stockier than on later versions, too.

Early Strats in general had deeper body contours; Fender is spot-on with the '54, and it instantly feels 'right'. It looks great in flash-coated nitro lacquer, too.

The body is two-piece, side-jointed ash, but so expertly have the pieces been joined that it took us minutes to locate the faintest line running under the jack socket.

Pickups are newly designed 1954s, and Fender says they sing with the tone of the originals. These would have been mated to a master volume, two tones and a three-way switch; however, the more usable five-way is fitted and the former is supplied, should your vintage sensibilities win out.

Although possessing a fairly fat neck, it's also incredibly comfortable, filling the palm and seeming effortless to play. In hindsight, Fender got it right with the 7.25-inch radius, as playing barre chords doesn't tire the hands, and pushing string bends 'up the hill' makes real sense.

Limited to a run of 1,954 units, the American Vintage 1954 looks set to become a collector's item. And that's a shame, because it cries out to be used and abused, gain dings and dents and become a patina-laden musical instrument - not a pristine museum piece!

To test the guitar, we went through our house AC15 with no outboard trickery, so any differences belong to the instrument itself.

We tested this American Vintage alongside it's 60th Anniversary sister models - the Mexican-made Classic Player 50s Strat and the American Standard Commemorative Strat - and this sat sonically in the middle of our trio: darker and more rounded than the Commemorative and brighter than the Classic Player. If you know what a great Strat sounds like, then picture it in your mind, and this is it. Better still, check it out on the video demo.

What better accolade to Leo and Freddie's design - that the present company can remake it as closely as this, and still it sets pulses racing and fingers flying? It marked the art of the maverick genius back in 1954, and it marks the art of musical instrument production engineering today - albeit laced with real heart and soul.