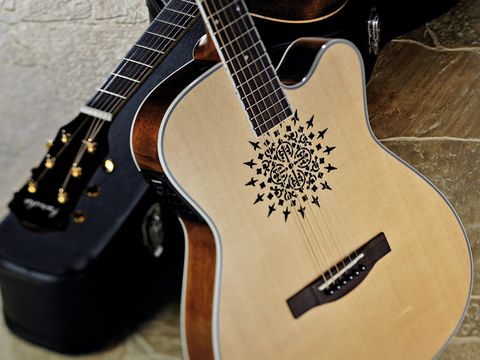 A striking stage-ready electro offering something for everyone.

Farida Guitars is a still comparatively new brand seeking to make its mark in the highly competitive, mid- priced sector of the market.

Its range includes 'dry' acoustics and electros with the aim of distancing itself from the pack by offering superior workmanship at comparable price points. On test here we have a brand new model, with the aim of being an affordable, stage-ready electro.

The SF-55CE marks a departure for the company in terms of design and carries the name of Farida's most recent endorsee, acoustic-gone-electric gal, Sandi Thom.

It comes with a fitted hard case and features the Fishman Presys Blend pickup system, which utilises an internal mic and undersaddle pickup.

The Fishman's control panel is mounted in the traditional position on the upper shoulder and is home to six rotaries; one each for bass, middle and treble (centre

detented), volume, notch and mic blend, as well as push buttons for phase and the chromatic tuner. When active, the tuner mutes the output.

After her performance at the Jazz And Blues Festival in Cheshire, Farida approached Sandi Thom with a range of guitars. She liked them and, soon after, Thom and Farida were in discussions about a new signature acoustic.

She recently told Guitarist: "Oddly enough Farida approached me right about the time I had just started cutting my teeth playing electrics, but I was really keen to get involved and very flattered to be deemed worthy of my own signature model".

The brief was to create a great-sounding stage guitar, rugged enough to stand up to life on the road, with looks to make it stand out from the crowd. Thom told us that she hoped building her own signature guitar would be a good way of attracting women to play.

We can only hope so, but the result of this collaboration - the Farida SF-55CE folk-bodied cutaway - is a particularly striking guitar. Constructed from a single piece of solid spruce, the guitar's soundboard has a laser-cut design instead of a regular soundhole. Love it or hate it, you can't help but keep looking at it.

As per Sandi's request, the SF-55 is a slim-bodied guitar, measuring just 82mm at its deepest. Not only does this make it comfortable to play, but very light too. Also the neck has been thinned to a super-slim 'C' profile that underpins a low action.

Solid mahogany is used for the two-piece back and sides, though again not bookmatched. Both the front and back of the guitar, as well as the mahogany-faced headstock, are finished with white binding. Farida- branded tuners and a strap button complete the fitments.

Our only major aesthetic complaint is the rather unglamorous pick-shaped truss rod cover, which has the endorsee's name etched into it - wouldn't wood be nicer?

That said, we were again impressed with the standard of finish and workmanship on offer. Though lightweight, this guitar gives evidence of being ready to cope with many miles on the road.

Acoustically, the SF-55's output is fairly rounded. Though not boasting as much volume, the SF-55 ticks more tonal boxes and curiously, despite its thin body, produces a likeable warmth and depth. The lack of a traditional soundhole leads to some interesting sounds further up the neck.

Palm muted solos above the 12th fret take on a 'nakedness' akin to when reverb is eliminated. But here is a guitar that's clearly designed for on-stage use, and in amplified mode the SF-55 produces a full, bright output, which again has plenty of mids, but not so much that things get overly boxy or brash.

With less need to tame the midrange, the Fishman's controls are free to offer colours and textures, however, we notice that blending in the onboard mic almost immediately induces feedback.

This aside, bearing in mind its price, the SF-55 is a good all-round electro capable of handling a range of disciplines.

Farida has proved that it can produce affordable guitars with first-rate build quality and our review model only serve to enforce this.

It's not the most tonally balanced acoustic we've experienced at this price, but we feel it could work in favour of the guitars in their primary on-stage role, especially if you need to be heard above other musicians.

Either way, if you're in this market area, we strongly suggest you add a Farida to your shortlist.