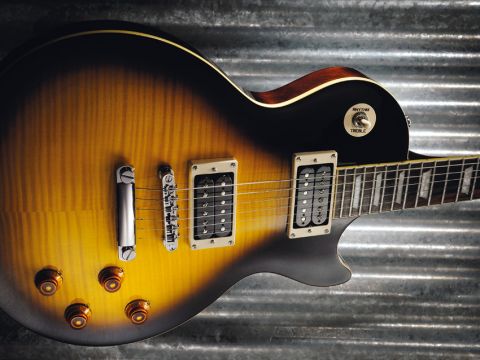 A proper Les Paul: the right woods, great pickups, good hardware. Who cares if it says Slash on it?

If you're a dyed-in-the-wool Slash fan, and the budget doesn't stretch to the USA version, stop reading this now and just buy this guitar. Seriously. However, if like the majority of people you're trying to work out exactly where it sits between the Epiphone LP Standard Plus Top and the USA Gibson Les Paul Standard, there are a few things worth considering.

First and most important, Epiphone has chosen the right woods for this guitar (bearing in mind that some Epi LPs have used an alder body). You get a one-piece solid mahogany back with a maple cap that measures around 5/8ths-inch thick at the back of the bridge pickup cavity. The set mahogany neck comes complete with the very important long-tenon joint that extends beneath the neck pickup cavity.

To help in the aesthetic department the lovely flamed maple is in fact a thin veneer mated to the plain maple top, before the whole thing is finished in high-gloss polyurethane. This will stay bright and shiny for decades, unlike a nitro-cellulose-finished USA Les Paul Standard which will take on the patina of age relatively quickly if used and abused enough.

The bridge and tailpiece are nickel-plated, which will tarnish much more quickly than chrome, much to the chagrin of owners who like to keep it all looking A1. Staying with aesthetics, while the body binding is very tidy, there's less than 1mm of it visible from the front. On a Gibson Les Paul, it's closer to 2mm; a subtle point but it does jar if you're used to looking at those lovely '59-style LPs.

And, should you, or shouldn't you? Fit the pickguard, that is. There's one included in the case - Slash prefers his Les Pauls without - and your dealer should fit it if you want it there. Compared with a Gibson example, it's a thicker, more rudimentary affair.

There are practical benefits to Epiphone's LockTone bridge and tailpiece. As any long-suffering tune-o-matic/stop tailpiece users will know, the parts are free to fall off when restringing, but here Epiphone has developed a spring-loaded clip system that holds them on.

This arrangement is not as secure as the TonePros type, but much better than standard fare. Epiphone is also claiming tonal benefits, drawing on the theory that anything that's physically locked down will transfer vibration better.

There's some sense in that, but the parts are more sprung in place than physically locked down. We could be splitting hairs here - we don't hear too many complaints about the tone of a great Les Paul with standard hardware. The biggest issue is loose or rattling saddles: no such worries with the Epiphone Slash.

Similarly impressive is the fingerboard; we've had Gibsons through these offices in recent times that need work from new, but not this more lowly Epi. This attractive rosewood slab is super smooth and lovely to play, helped no end by a commendable fret job.

The acrylic trapezoid inlays are neat too, if not as attractive as those on many a USA and especially Custom Shop Les Paul. Less impressive is the nut; it's cut a touch high (better that way than too low, granted) and it's sticky. This is relatively easy to sort, but it'll be a source of much tuning-related grimacing if you're not familiar with guitar maintenance.

Finally the peghead and tuners: overly green keys and slightly wonky fitment of the low E peg notwithstanding, it all functions as it should. Epiphone's standard headstock pitch is 14 degrees, while the 'correct' Gibson angle is 17 degrees (the shallower pitch means less down pressure over the nut).

What do we have here? Well, comparing directly with three Gibson Custom Les Pauls we'd say it's somewhere between! Closer to 17 than 14 in truth, but you'd be a brave gambler to bet that it makes a discernible tonal difference.

Despite the similarity in materials and build, the tonal range of new Gibson and Epiphone Les Pauls is massive. A lot of that is down to the quality of the woods and hardware, but the biggest single immediate factor is the pickups.

Slash has been a long time fan of Seymour Duncan's Alnico Pro-II - a relatively vintage-sounding, low-output humbucker (7.6k neck, 7.85k bridge) - and that's what you get here.

If you're used to Gibson's 498 and 500T stalwarts, you'll be struck with how open and breathy the Alnico Pro-II sounds. They clean up better when you knock the volume down and retain sweeter highs with less dominant mid-range bark right across the board.

Classic rock and blues is what it's all about - enough grunt to push an old-school valve amp to clip, but not the kind of clinical power and ultimate articulation of aggressive ceramic-magnet or active humbuckers.

Medium-gain players with an eye on the past will find that makes for a far more musical, engaging experience. Does it sound more musical and refined than an Epiphone Les Paul Standard? Without doubt. Does it outshine a new Les Paul Standard with Burstbucker Pros? Well, there's a little more softness around the edges, and marginally less depth and maturity to the overall tone, but there really isn't that much in it.