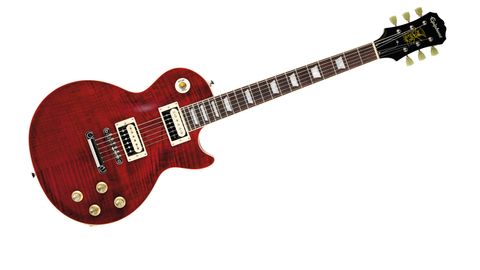 This is the Epiphone version of a limited-edition Gibson that's no longer available. Slash is often seen on stage with that guitar, and the Rosso Corsa finish, translating from Italian as 'racing red', is exclusive to the RC models.

There's a touch of burgundy to the colour, and it looks great, with the AAA veneer of flamed maple beneath mimicking a real - and much more costly - flamed maple cap.

The hard rock maple cap sits on a mahogany body. The latter has undergone weight relief treatment, which sees nine holes drilled into, but not through, the body wood. Strapped on, it's all you can do to resist automatically adopting a rock pose.

Pickups comprise a zebra set of Seymour Duncan Alnico Pro II Slash humbuckers that are controlled in the usual manner, and the profile of the neck is based on that of Slash's main Gibson LP, offering a playable mix of late 50s girth with early 60s width.

The pickups, voiced to resemble a boosted PAF 'bucker, sound full and fat with enough of a modern-style edge; and through our litany of Marshall test amps.rock chords do just that: rock. It sounds good fed straight into GarageBand, too. We love the guitar's look, vibe and tonal versatility.