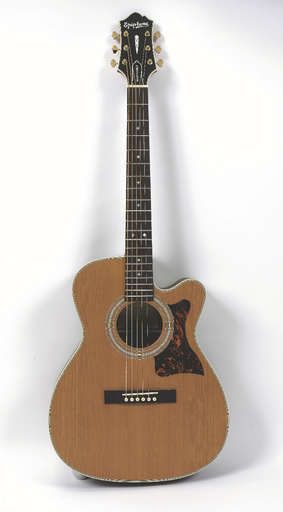 Any guitarist in the market for a keenly priced investment should be very satisfied indeed with this gorgeous instrument.

When Epiphone resurrected the Masterbilt name a few years ago, it both reacquainted the firm with its past and equipped it to deal with the future.

Since then, and with the Masterbilts performing strongly in the mid-price market on their own merits (rather than relying on the association with the thirties originals), Epiphone has worked hard to bring diversity to the series.

Having tested the water with several spruce-topped and mahogany-bodied models (and found it receptive), Epiphone's latest Masterbilt features the potentially more interesting combination of cedar and rosewood, plus the option of amplification.

Epiphone claims its intention is to "revive the prestige of the 1930s Masterbilts" and, on the surface at least, the EF-500RCCE looks the part.

With its flat-topped fingerstyle shape (dreadnought and nylon-string equivalents are available), understated natural satin finish and generally consistent grain across the solid cedar soundboard and rosewood flanks, this is a more inviting visual package than any of the existing Masterbilts.

As for the 'prestige', that's taken care of by the offset notch headstock shape, the retro Epiphone script logo and the pearl 'stickpin' inlay.

The fact that the LR Baggs Element piezo is controlled via a subtle volume dial inside the soundhole (as opposed to an unsightly three-band EQ on the upper bout) also helps maintain the antiquated vibe of this instrument.

Unlike most other Far Eastern manufacturers, Epiphone has enjoyed a dedicated factory and workforce since opening its Chinese facility in 2003.

The benefits are obvious in the EF-500RCCE's build, which is reassuringly neat and tidy from the rosewood 'board to the tapered dovetail neck joint (carefully securing the mahogany neck to the cutaway body with hot hide glue).

A hint of rattle from the bridge saddle pins is probably just a one-off, and there's not much that can be done about the slight untidiness of the wiring within.

It's a solid package - no less than you'd expect from the price and the brand. Bar a slightly jumpy performance from the gold Grover tuners, the physical playing experience is a good one.

The compact dimensions of the EF-500RCCE's body put you in close control of things, while the unobtrusive fretwire allows for easy execution of rolling and tumbling finger-picked passages.

That stands to reason; buyers at this kind of price point will surely want more than simply a vehicle for strumming, and between the EF-500RCCE's cutaway and comfort beneath the fingertips, they won't be held back.

While it's hardly an unusual combination, the EF-500RCCE's pairing of cedar and rosewood provided a welcome tonic to the spruce tops and mahogany bodies that are prevalent in this price bracket.

Played unamplified, this model demonstrated a convincing tendency towards the lower frequencies and warmer tones (a fact compounded by our inclination to use fingers over picks), but it didn't let the overall output turn soupy.

When you strike a note, you hear it - even as part of an open chord. Perhaps it's fortunate that we appreciated the raw tone of the EF-500RCCE, since without a dedicated EQ, there's not much scope for tailoring it once you're plugged in.

While more eclectic players should be aware of the lack of tonal options, we didn't feel this presented a problem.

The warmth and conviction of this guitar's tone is something to be savoured, not softened or sharpened by endless tinkering with EQ sliders.

Ultimately - and provided it's used in tandem with a decent acoustic amp - the feature that we initially feared might be a limiting factor actually made playing this guitar a surprisingly liberating experience.

Rather than dine out on past glories, the Epiphone Masterbilt series has previously impressed with its readiness to roll up its sleeves in the mid-priced market.

The EF-500RCCE cemented this impression across the board, combining its cultured appearance with a bullet-proof build, and offering a raw tone so accomplished that it wasn't a problem that we couldn't really tweak it.