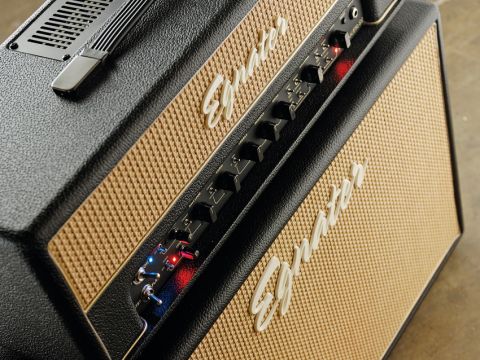 Like the Tweaker 15, this is another great amp from Egnater that's destined for future classic status.

Bruce Egnater is one of an elite handful of designers who've wielded a significant influence over the development of the modern electric guitar sound in the last three decades, with an enviable artist list that reads like a who's who of the world's greatest players.

In the past few years he's released a breakthrough range of internationally acclaimed amps of which one star is the Tweaker - a small but perfectly formed 15-watter that impressed us enough to pick up a rare Guitarist Gold Award.

Since then Egnater has expanded the Tweaker into a range including a 40-watt version powered by a pair of 6L6s, and the amp that we're looking at here, the mouth-watering KT88-powered Tweaker 88 head.

Like the rest of the Egnater range, the Tweaker 88 is designed in the USA and built in China by a specialist factory to exceptionally high standards.

It's a slim, compact head that sits nicely with the rest of the range, covered in a decently thick black Tolex with a straw grille, gold piping and black chrome metalwork.

The Tweaker's build standard is equally good on the inside, with most components supported on three good quality through-plated circuit boards. There's one for the power supply and the other two for preamp and power amp, including the valve bases and most of the front and rear panel knobs and switches.

There's a lot of wiring inside and many connectors, mostly spades with several multi-pin Molex-style plugs and sockets; however, it's all tight and neatly bundled.

A dual-channel design, the 88 has two pairs of gain and master volume controls feeding a shared bass, mid and treble EQ network. Each channel features a quartet of toggles: tight/deep cuts the bass response at the front of the preamp, while bright/normal lifts the high-end response.

The EQ features a special toggle switch that lets you select between three classic American and British tone control circuits: USA is an emulation of the fabled 'Blackface' tone, while Brit offers a stronger low mid-range response.

The AC setting offers an alternative British tone based on an amp with a unique and quirky tone circuit. Both channel master volumes have a vintage/modern switch that reconfigures the output stage from a flatter response to enhanced lows and highs.

Finally, both channels benefit from a two-mode boost that works as either a second master volume (clean mode) or an extra gain boost, adding distortion as well as extra volume.

Despite all those front panel features and tone switches (no less than 13), it's easy on the eye and easy to understand.

At the rear, there's a pair of speaker outs with selectable impedance, a series effects loop with switchable levels and two sockets for the Tweaker's four-button footswitch.

This swaps channels, switches each channel's boost function and toggles the effects loop. The well-written manual is worth a quick read, but we reckon most players will be at home with the Tweaker very quickly - it's one of those amps that feels friendly even before you switch it on.

The overall impression is one of solid reliability that should easily handle pro-level abuse.

The Tweaker 88 powers up smoothly and quietly with practically zero mains hum and just a faint whirring noise from the internal cooling fan.

Thanks to the preset switches near the gain control it takes just seconds to dial in both test guitars, with the hot/clean switch taking the clean channel into serious crunch territory while retaining plenty of control over those 'just on the edge' mild overdrive sounds.

We were particularly impressed with the Tweaker's shimmering treble response that's clear and defined without ever being shrill; this carries over to the lead channel where similar versatility puts you in command of distortion and overdrive that can go from sweet classic blues to a screaming white-hot sustain, which is perfect for modern rock.

When it's wound up to live gig levels, the KT88s come into their own, delivering the kind of thump and clarity associated with quartets of EL34s or 6L6s, but with more dynamic response; similar to the compression effects on a classic 'Blackface' Deluxe, but with more headroom.

"We chose KT88 tubes for a variety of reasons," explains Bruce Egnater. "Firstly, we wanted to get the most power in a small box as possible. You can't get anywhere near this kind of power with a pair of any other tubes. Secondly, the KT88 is probably the tightest and hugest sounding tube there is, which is what we wanted this amp to be. Thirdly, it was kind of cool to have 88 watts out of a pair of KT88 tubes.

"More importantly, 88 miles per hour is the speed the DeLorean had to reach to send Marty McFly back to the future… kidding, but true! Seriously though, after hearing how the KT88 tubes sounded in this little head, there was no turning back".

The buffered series effects loop is quiet and transparent, however, because the entire signal goes through it - a poor pedal can degrade the Tweaker's stellar tone, making the loop defeat switch on the foot controller a welcome addition. Quality effects shine in this loop - we used a TC Electronics G System with excellent results.

The foot controller switches channels seamlessly without any pops or clicks and bringing the 88's boost functions into play provides four instantly available sounds at your feet; very impressive.

Combined with the Celestion-loaded 212CX cabinet, there's plenty of volume for live work, yet the amp's noise floor is low enough for pro-recording or enjoyable bedroom use.

The Tweaker 88 brings together a wealth of easy-to-use, real-world features that make it a great choice for any guitarist, though it's particularly well-suited to old-school players who want a good basic core tone with extra flexibility that doesn't sacrifice the feel and fun of a simple vintage amp.

Of course, those who like to tweak their sound will be in heaven with all those mini switches. At this price, the quality of tone and response is fantastic, challenging some amps that cost two or even three times the money and making it difficult to find much in the way of direct competition.

The same thing goes for the Egnater's build standard, which exceeds that of many USA-built products, while for offshore manufacturing only a few can match it.

Ultimately, it's all about fun and enjoyment and few amps have given us as much pleasure as this one at any price. Egnater should be on every player's must-try list.