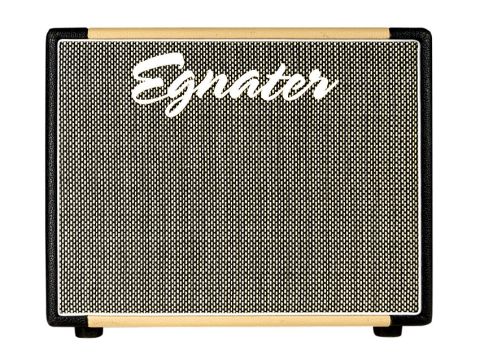 One of the best small combos in its class - add the 1 x 12 extension cab and you've got a killer rig that's highly portable and versatile.

The Egnater brand may not be so well known here, but in the USA, Bruce Egnater is rightly recognised as one of an elite handful of designers who've had a profound impact on the electric guitar's sonic development.

Born and raised in Detroit, Michigan, Egnater grew up learning guitar with the music of the local bands of his era, including Alice Cooper, Grand Funk Railroad and Bob Seger. His frustration at not being able to find an amp that did what he wanted it to led to Bruce designing and building one of the first cascaded gain lead channel guitar amps.

Ever since then, for three and a half decades, he's run his own custom amplification shop and worked with some of the world's top players, including Kirk Hammett, Steve Vai and Dimebag Darrell, as well as Randall and Rocktron.

Besides licensing his modular concept to Randall for the MTS series, Egnater hand-builds his own custom amps in Berkeley, Michigan and also has a range of Chinese-made products - including the Rebel 30 1 x 12 combo - which have been out for a couple of years, but only recently made it to the UK.

Hear the Egnater Rebel 30 in action in the following audio demo:

It may be a Rebel, but it's a smartly dressed one, with a suit of two-tone cream and black vinyl that's much thicker than we're used to seeing on Chinese products. The Rebel 30's cabinet is compact and deeper than you'd expect, making it very nearly a cube, but is easy to carry single-handed.

The electronics are contained inside a tough 'L'-shaped steel chassis, mostly on two large high quality printed circuit boards, one mounted vertically for the preamp stuff and one mounted horizontally for the output stage. These hold nearly everything, including the valve bases - the output valves hang upside down from the bottom of the chassis, while the four preamp valves are mounted horizontally and accessed through a removable grille, nearer to the top of the cabinet.

The colour scheme carries on to the control panel, where the Egnater's boutique heritage becomes clear. Channel one, the clean channel, features volume, bass and treble; channel two handles overdrive with a familiar layout of gain, master volume and three-band EQ.

Both channels feature sub-miniature toggle switches to operate Egnater's 'bright' and 'tight' functions, making it easy to add a little extra snap to a Les Paul or girth to the low-end of a Strat or Tele.

Now for the cool stuff: both channels have separate attenuator controls, varying the amp's output from a maximum of 30 watts down to just one watt. The Rebel 30's trick output stage features a pair of EL84s and a pair of 6V6s, which are linked to a front panel detented mix control that lets you fade from one pair to the other, with both pairs on in the centre position.

At either extreme you get about 20 watts, going up to around 30 with all four valves working. "I came up with the idea for that while I was stuck in an airport waiting for a flight," explains Egnater over a crackly trans-Atlantic phone line. "There are lots of amps with more than one type of output valve and I wanted to do that, but in a different way. As far as I know nobody else has that mix control, and the cool thing is it really works - you can really hear the change as you fade from the EL84s to the 6V6s and back again".

Next to the mix control is the standby switch, which has a third position for silent recording. This mutes the custom Celestion Egnater Elite 80 loudspeaker, but leaves the rear panel recording output active. This is balanced and speaker compensated, for an authentic straight-to-tape (or disk) amplified tone.

Other rear panel features include external speaker jacks, a socket for the two-button footswitch, switchable impedance and mains voltage (carefully protected under a screw-down cover) and separate channel level controls for the Rebel 30's digital reverb.

One minor annoyance: the reverb controls are laid out the opposite way round to the channels. If you lean over the front of the amp to adjust them, the reverb level knob for channel one is nearest the panel controls for channel two, and vice versa.

But that's pretty much the only thing we could find to grumble about here. The Rebel 30 has excellent build quality, tantalising features and plenty of that very rare commodity the Americans can do so well: style. As if to make sure we get the point, there's also a padded cover embroidered with the Egnater logo and a well-written informative manual printed on luxury paper.

"If you go to a Chinese factory and tell them you want something quick and cheap, you'll often get what you deserve," says Bruce. "We've worked tirelessly with our partners in China to raise the bar for quality. We're on the phone talking to them every day and make frequent visits to the factory to keep on top of things. I'm very proud of what we've achieved and I think the results speak for themselves".

We tried the Rebel out with our two regular test guitars: a Strat fitted with regular output Duncan Alnico Pro II single-coils, and a vintage Paul Reed Smith CE bolt-on loaded with HFS and Vintage humbuckers.

The Egnater's clean channel is rich, responsive and warm, with an extended glassy treble and nicely contoured lows that are easy to whip into shape with the bright and tight switches.

We never noticed the lack of a mid-range control - bass and treble interact smoothly and make it easy to get stunning clean sounds, enhanced by the smooth digital reverb, which tails off naturally as you switch between channels, despite level changes - something that Egnater calls 'spillover'.

As you turn up the volume a little more, the clean channel develops a subtle edge that's highly rewarding for big chords. The lead channel is quick and easy to dial-in and the gain control has plenty of mild overdrive range, with all the monster distortion happening in the last quarter of this knob's travel.

Egnater's signature hot lead tone is great fun, with a vocal sustain and harmonic squeals exploding off the attack of every note. "That edge on the clean channel is deliberate and something a lot of players like," says Bruce. "The lead channel has the classic Egnater tone - over the years I've learnt a lot of tricks and they help to define a character that folks will hopefully recognise."

At higher volume levels, the attenuator controls make it easy to add just the right amount of power amp drive, while being able to fade from the boxier mids of EL84s to the fatter bass and airy treble of the 6V6s is a revelation. There's so much colour to be had from these two features you may never get around to using the tone controls.

At higher volume levels the Rebel 30 sounds much fatter and benefits from the purer tone of single-coils, while at low-to-medium volumes it's humbuckers that win. It's loud and easily copes with an unmic'd drum kit, with very little of the boxiness normally associated with small combos.

This is one of the best Chinese-made amps we've ever seen, with build quality, electronics, high-end design and sheer tone that far exceeds many Western-built products. It isn't the cheapest 'offshore' 30-watt amp you can buy, but you're getting what you pay for and then some, as there are many combos costing from £1000- £2000 that can't touch the Egnater for tone and response.

The Rebel 30 is one of those rare amplifier designs that simply cannot be made to sound bad, no matter how hard you try. Easily portable, capable of turning out great results in the studio and small to medium gigs, it's already a major hit in the USA and we think that it's destined for great things over here too. If your bag includes rock, blues and fusion, then this amp probably has your name on it… as well as Bruce Egnater's, of course!