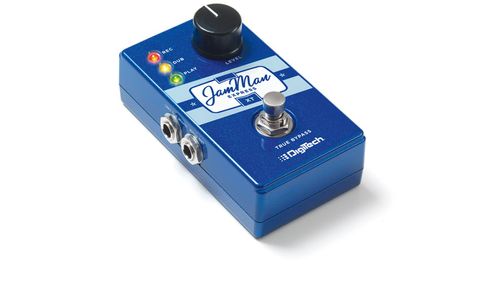 The JamMan Express XT is a no-brainer for your pedalboard, whether you're a loop newbie or a seasoned loop fiend.

If 2013 taught us anything, it's that guitarists love loopers. The JamMan Express XT is DigiTech's entry into the easy-to-use arena, and carries the legacy of previous JamMen plus a few of its forefathers' features, too.

The single-footswitch JamMan is a fully featured looper, with record, overdub, undo/redo and stop/start functions. DigiTech has also crammed in stereo inputs and outputs, 10 minutes of stereo looping and JamSync, which allows you to chain JamMan pedals together for multiple loops and ensemble looping.

Using the pedal is simple: tap once to record, again to play; repeat to overdub, then double-tap to stop the loop. To play it again, tap once, or hold the footswitch down for two seconds to clear the loop - and here's where it gets really clever.

With other single-footswitch loopers, you'd hear two seconds of your loop before it cleared, but the Express XT boasts what DigiTech calls Silent Clear, which detects how long your foot is down and determines whether you want to start the loop again or clear it completely.

It's smart stuff - combined with an intuitive interface, a wealth of ingenious features and a killer price tag.