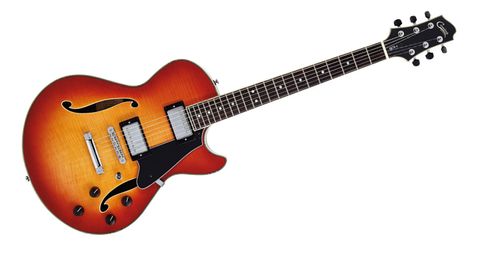 A perfect choice for the serious jazz/blues/fusion player. Beautifully crafted, too.

Bill Comins is a top-flight USA luthier and the GCS-1, constructed in Korea, represents his first offshore venture.

Constructionally, it sits midway between the classic ES-335 and the modern solidwood-style of semi-acoustics like the PRS SE Zach Myers. So, we get a solidwood centre section routed out to leave a full-length centre block and plenty of air in the lower bouts. Above the tip of the two f holes, however, it's all solid.

Both the back and top are laminated, and faced with mahogany and figured maple veneers respectively. Edges are bound top and back, as are the f-holes, and while all our samples have an arched top, this is the only one with an arched back.

The control layout is close to the classic Gibson recipe, but both 'buckers can be simultaneously coil-split - voicing the neck-facing single coils of each - via a pull-push on the neck pickup's tone control.

Those wooden control knobs, with clear position markers, add some boutique class that's mirrored by the faux ebony buttons of the Wilkinson tuners.

Its three-a-side headstock has a modern-but-classic shape, and its understated looks are supported by simple dot inlays on the very clean 'board. It's a well thought-through design with a good weight and enough bulk for a seated jazz player.

With a glorious new Gibson ES-335, a more hollow and lighter-weight PRS Singlecut Hollowbody, and a few other semis, as references we warmed up our test amps. Any guitar that gets close to those benchmarks is going to be good. We weren't disappointed.

There's a little more 'tuxedo' to the Comins. There's a richness to the clean tones, and 'home' might be the neck humbucker, especially cleaned with some volume roll-off. The single-coil mode is useful, too, and there's plenty of jangle here - with crunchier sounds that work well, though the bridge pickup is a little too open for tougher rhythm styles.

At the higher end of gain settings, it doesn't sound as convincing as other semis we've revived lately, for example, the LTD Xtone PC-1V. We prefer this lower-gained, although it handles volume well. It's also a very comfortable guitar seated or standing.

The Comins seems tailored more to the jazz/blues player who doesn't need rockier sounds. But as a jazz/fusion guitar for the serious musician it not only looks the part but sounds it, too.