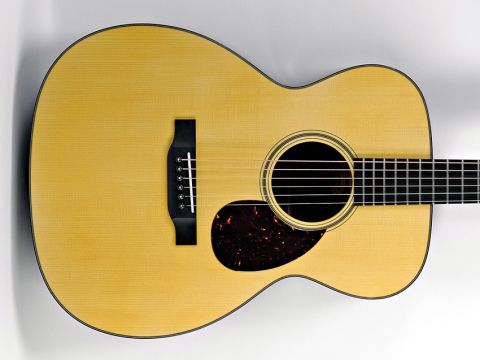 This OM1AV is the ultimate modern version of genuine vintage tone; flawless build and ultimate playability. Sorry Granny, you've got to go.

Guitarists often feel that an instrument's look is the all-important factor. Pickups and hardware can be upgraded, and almost anything can be set up to play just as you want. That's when highly figured maple tops on PRSs and Les Pauls enter the picture, or exotic timbers on top-end acoustics. Some cheaper guitars even use flashy cosmetics to tempt the eye and mask inferior materials and construction.

So when confronted with the plainest looking acoustic we've seen for ages, but sporting one of the scariest price tags of any flat-top we've encountered, questions arise as to just what we're getting for the money.

Hear it for yourself in the following clip:

Well, it's a Collings, so that means top-flight construction, relatively limited numbers and all that the word 'boutique' implies. But is that enough to turn a simple mahogany (albeit Honduran)-bodied, folk-sized guitar into something worth a King's ransom? No; it's two other things actually.

First is the guitar's top. It's Adirondack, or red spruce, a timber prized by early 20th century aeroplane builders and musical instrument makers alike for its strength and elasticity.

Collings' UK distributor, Doug Chandler, elaborates: "Adirondack was the tonewood of choice for top instrument makers before the Second World War [Gibson's Lloyd Loar mandolins and L-5s used it, as did the best Martins]. Over-harvesting saw it almost disappear, but it's gradually become available again after 50 years of re-investment. It's still hard to get large enough trees for clear, full-size tops though."

Adirondack is generally louder than other spruces, with more of the natural overtones that a good acoustic needs for a full, dynamic tone. But it's also one of the plainest looking, with rarely any 'bear claw' figuring or interesting medullary rays that Englemann or Sitka spruce - the latter as used on most Collings and other high-end brands - can exhibit. Sitka is also very available and so a lot cheaper. So what's the charge for this 'special' material? To you, sir, a nifty £815!

The second, and perhaps even more interesting, facet to this particular OM1 is its finish: it's shellac. Shellac is the classic varnish or French polish, and was only replaced by nitrocellulose as the favourite for instruments and furniture around the 1920s and 1930s.

Made from the secretions of the shellac beetle, or 'lac bug', the product is harvested, dried and then dissolved in alcohol to be applied in thin, multiple coats by the most highly skilled of hands.

"Proper application of shellac ensures a very thin protective layer with negligible effect on the ability of wood surfaces to vibrate," explains Chandler. "It also has a distinctive colour that gives a 'vintage' look without seeming artificially aged.

"But it's extremely time consuming to apply, taking days of multiple thin coats, a great deal of careful sanding and long drying times between applications. It also doesn't adhere well and makes many darker woods 'bleed' into adjoining lighter ones, requiring still more care and attention."

So it's a tricky process and the upcharge it reflects is a coronary-inducing £1,650, but it also includes a nitro-cellulose satin finished neck - standard models use polyester neck finish and polyester base coat with nitro top coats. Even so, that's two-and-a-half grand more than the already 'professional' £2,899 price tag accorded to the company's 'basic' OM1.

Daring to lift the guitar from its plush-lined case, you're shocked by its lightness. It's like there's nothing there. It also seems to vibrate just by being picked up, so heaven knows what a quick strum or a deft fingerpick will illicit.

But first let's look it over in detail - and we might as well start with that £1,650 finish. You might expect something so thin to have sunk into the wood grain, leaving telltale flecks in the mahogany and lines in the spruce. But no, this is mirror flat. So it would appear that the alcohol has completely evaporated, leaving behind just the dried beetle juice as a crystal hard deposit.

Chandler is right about the colour too - it's already naturally tinted and will darken further as the years go by. There's not a flaw anywhere in sight - and nor should there be, you might say. We've never seen a Collings that doesn't look like it was machined from titanium by diamond-tipped cutters, so perfectly are they hewn. Examine any part, external or internal - including the vintage scalloped braces and flawless kerfing - and you'll see nothing but sublime workmanship.

The top is feathered around the edges to be slightly thinner and to allow the best possible vibration; it's also slightly convex for added rigidity, and the internal neck heel block is only glued to the back and sides so doesn't interfere with the top's vibrations.

Collings acoustics feature bolt-on necks rather than the traditional glued-in style. "Since the two bolts and threaded inserts are fixed into the heel, an area of potentially weak end-grain, Collings glues a half-inch birch dowel up into the heel before the end-cap is fitted, for the strongest possible joint," clarifies Chandler.

Another feature of Collings necks is a set of four steel strips embedded alongside the adjustable truss rod. According to Chandler this came from Bill Collings' research into vintage Martins, whose non-adjustable steel bar reinforcements tended to exclude dead spots. "This is part of the reason Collings guitars have such an even response throughout the tonal range," says Doug.

With its standard 43mm nut width and 'C-to-mild-V' neck shape the action is perfect. It seems effortless to play on the D'Addario 12-gauge strings and all who tried it agreed it made them feel like better players. Top-end access is naturally limited, but a cutaway is one of the many other upcharge options should you desire it.

Adirondack's reputation for tone is well founded. And mated to this organic shellac finish, we find a guitar that genuinely sounds different. Fortunately we were in possession of a 1949 Martin 000-18 for sonic comparison - a folk-sized mahogany guitar not dissimilar to the Collings, although with a nitro-cellulose finish.

The Martin has genuine vintage tone that's edgy but warm, punchy yet sweet, and the OM1AV is remarkably similar. If anything its tone is more refined, with spankier highs and a quicker response to either pick or nail attack; there's perhaps a touch more strength in the bass too and string separation is remarkable.

The Martin was recently described by Stuart Ryan, the acoustic maestro of our sister magazine Guitar Techniques as, "possibly the best sounding acoustic I've ever played". And if the Collings pips it at the tonal post, then putting Granny up on Ebay starts to look like a realistic next move!

Here's where we try to justify the cost equivalent of another Collings OM1 (or a Fender USA Strat and Marshall stack), for that 'rare' Adirondack spruce top and 'special' shellac finish. It would seem impossible, were it not for the tangible difference you feel when you play this guitar.

Any standard OM1 would play as brilliantly - Collings is renowned for buttery smooth actions on all its guitars. But modern acoustics - especially the highest grade ones - often seem clinical and unfulfilling to this reviewer's ears. Where this one differs is that it sounds like you imagine the best original Martin OMs did 80 or so years ago.

We have bleated on about the 'law of diminishing returns' in reviews of expensive kit for years. But never has the term been so appropriate. For the gigantic extra outlay you get a palpably better sounding guitar, possibly even the best you've ever heard - by maybe 10 percent.

But whether you can justify spending so much on such a small difference - even though it could represent the Holy Grail of tone - only you'll know. All we can say is that, given a chance win on the Lotto, this OM1AV would be going nowhere!