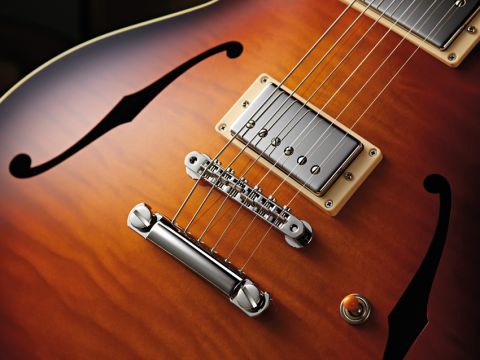 Once again, Collings redefines the term boutique guitar. One of the finest thinline semis we've ever played.

For most high-end guitar makers, wood choice is everything.

But of late, Bill Collings has been hankering to try something different - something that Gibson got right when it made the ES-175 in the forties and the fabled ES-335 in 1958 - laminate instruments. While Gibson's laminates have varied in both number of layers and in material used - three or four, all-maple or maple/poplar/maple and so on - Collings wanted consistency of weight and tone so set about actually making his own, inspired by the dynamics and sonic range of Texan guitarist, David Grissom's, 1959 ES-335.

The result is the I35LC: a scaled-down laminate-bodied ES-335-style guitar. At just 381mm (15 inches) wide and 41mm at the rim, the Collings is noticeably smaller than its forbear (although similar in size to its later ES-336, ES-339 and more recent Midtown models).

"You have to admit," muses Bill Collings, "we are all swayed by design. There's a beauty to something that has the proper perspective, so we tried a few different horn shapes. Some early prototypes were too pointed and others looked like they had Mickey Mouse ears. We settled on a shape that worked well with the 15-inch body.

"Upper-fret access hasn't seemed to be an issue and we wanted something that worked well and looked good. As for the 15-inch body, we just wanted to make the guitar a bit more comfortable."

Like an original ES-335, a mahogany neck is set into the body, a long tenon ensuring strong contact, rigidity, mass and sustain. "Making the cutaways deeper would have affected the neck joint," Collings elaborates, "and we knew we wanted a certain amount of mass there."

High-grade Indian rosewood is used for the unbound, pearl-dotted fingerboard with its 22 medium oval frets and 43mm wide bone nut, while the asymmetrical peghead receives a classy ebony veneer facing, pearl company logo and a set of Gotoh tuners with stylish cream buttons.

Electrics and hardware ape the original in operation and layout, with lockable TonePros tune-o-matic bridge and stud tailpiece, plus a pair of Lollar Imperial humbuckers.

"We tried lots of pickups," offers Collings, "but decided to stay with the Lollars on the laminates. However, we wanted to distinguish them from the solid wood I35 models by enhancing the mid-range and increasing output.

"Since feedback is limited due to the laminate construction, we were able to use a little 'more' pickup. The solid I35 is so sonically active that it can get muddy with a higher wound pickup, so we use low winds for the solid wood models and standard for the I35LC."

It's all but impossible to find any fault with Collings' construction. The finish - stained brown on the back and only 'bursted on the front - is nitrocellulose, superbly applied, flatted and buffed.

Other touches we love are the offset cleft headstock design, the arrowhead truss rod cover, and how the rear body binding is elegantly sculpted around the body's heel.

Much has also been said about the playability of Collings necks and the I35LC doesn't disappoint. "It is our interpretation of a very playable late '50s neck," says Collings; "there's enough mass to have a great tone, but enough contour to be comfortable."

Strung with 0.011-gauge D'Addario strings, there's pleasing resistance yet enough looseness to prevent you from feeling 'shut out', as heavily strung guitars all-too-often do. To be honest, most people assumed they were 0.010s! A couple of players did comment on the slightly tight cutaway when reaching for tricky top-end bends, but for the majority those upper reaches shouldn't pose a problem.

The nature of the guitar lends itself to anything from straight jazz to classic rock, pop and of course blues. It's such an 'in-tune' instrument that open-position strumming, power chords and complex jazz shapes up the neck are equally well served.

Likewise string bends and vibrato feel entirely natural. There's nothing extreme about the LC's feel - simply pick it up and you're at home.

Unsurprisingly, the diminutive body size affects playability too: lighter in weight than a modern ES-335 and with reduced width and girth, it hugs the body that little bit better - this reviewer's own 50th Anniversary 335 feeling decidedly old-fashioned alongside it. Yet you still don't want to chuck it around like some metal axe - the LC retains that peculiar upmarket vibe that ensures you treat it with the respect that a great musical instrument deserves.

Bill Collings has spoken about wanting the sound of "ripping cardboard" from his I35LC - something he hears in great old Gibsons. Well, there's a lovely 'dryness' about the guitar that makes it full and immediate.

Straight into a tweed Twin with no reverb or other effects and it sounds musical, right off the bat. Select the bridge pickup, strum an AC/DC-style open G chord, shake the neck slightly and heaven awaits.

Wind up the output volume and the guitar and amp work in tandem, getting better with every notch on the control. Back off a touch, flip to the neck Imperial and all the clichés come tripping out - 'flutey', 'woody', 'rounded' and yes, 'articulate'.

With the tone control wide open there's real air in the sound - "openness" as Bill describes. We have to presume it's the combination of fine materials and that "stressless" construction - along with Jason Lollar's fine pickups of course - that ties it all together. Experiment with the funkier middle position, then start exploring those all-too-rarely-used tone pots and all manner of vintage and modern tones emerge.

Whatever amp you use it with, we'd bet that the I35LC will make it sound as good any humbucking guitar you're likely to have tried - though the thorny subject of a price tag that nudges four grand cannot, of course, be ignored.

And while we could carp on about quality materials, high production values, low quantity output, painstaking build, boutique desirability and so on, such details - or excuses, if the business of high-ticket guitars passes you by - are irrelevant with a guitar like this in your hands and plugged into the kind of amp it deserves. Bill Collings and his team have created a superb guitar.

The concept of a smaller-bodied thinline semi is not new - Gibson even got there first - but to find one so perfectly reasoned and so stringently put together, makes one glad to be in this job. You could examine the I35LC for hours and not discern a flaw; play it all night and not find a bad sound, a choking fret or a dead spot (not unheard-of on semis).

But above all is a feeling that you may just have bonded with a new friend, or perhaps discovered a wonderful old relative you never knew existed. A stunning guitar.