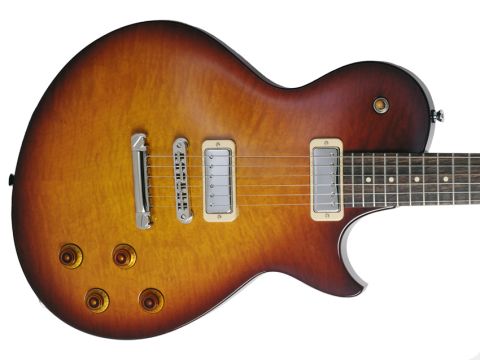 Here's a superb single-cut with brighter 'bucker sounds and, thanks to the finely-matched volume and tones, a hugely versatile palette of really musical sounds.

Whereas the City Limits is clearly Collings' version of the Les Paul, and the 290 its fine take on the dual-P-90 all-mahogany Special, the 360 - again named after a Highway in Texas - sits between them in style and price.

Although the base model is all-mahogany, our review model has a subtly figured maple top. Its offset outline is quite radical - as if the City Limits has melted in the searing Texas heat, pulling down the treble side for an elongated shape with improved top fret access.

It's certainly not the first time someone's offset a Les Paul, and brings to mind Ted Newman-Jones' early seventies guitars, originally designed for Keith Richards. But along with the beautifully carved top, a chamfer on the back of that bass-side bout and overall much trimmer 46.5mm depth make it a very comfortable, perfectly weighted guitar that feels excellent strapped-on and more balanced when played seated.

Wood choice and craft, of course, is exemplary. The one-piece back is Honduran mahogany, and the full, late-fifties Gibson-style neck is one of our favourites. It has a wide mortise and tenon joint, with a sloping heel that glues into the body.

Its 'board has a beautiful striped appearance, with perfectly seated and dressed medium frets (roughly 2.6mm wide and 1.3mm high) and grained ivoroid dots - simple, classic and so well done.

There's a slightly white colouration to the mahogany's grain filler, which may put off some as it contrasts with the vibrant cherry of the mahogany finish. The maple top is a rich amber with lightly 'bursted edges that almost gives the impression of dark edge-binding. Finish is, of course, nitro-cellulose - it feels much less sticky and soft, and is also perfectly flat, unlike PRS's recent Sunbursts.

Hardware is typical Collings: Tone Pros bridge and tailpiece and non-locking Sperzels with cream plastic buttons, on a rosewood-faced, back-angled headstock with rosewood truss rod cover. The simple Collings logo is the only brand identifier on the whole guitar. Superb.

With its Gibson-style control layout and shoulder-mounted toggle pickup selector you'd expect a pair of classic humbuckers. Instead Collings is using Lollar's mini humbuckers (routed parallel to the strings and not the face of the body, as seen on the 290), synonymous with Gibson's Les Paul Deluxe.

With volume and tones turned all the way up we're greeted with, as expected, quite a bright vintage-style 'bucker voice that slightly contrasts the beautiful round-nosed acoustic resonance.

There's a crystalline clarity to the almost steel-like bridge pickup that immediately puts us in a country/Americana territory. The neck pickup is fuller-voiced yet perfectly balanced, but it's when we pull down the volumes for the mixed pickup tones that we begin to hear the versatility of the guitar.

Suddenly, with our cranked, on the edge of crunch Fender-style channel, the 360 is almost Tele-like with more guts and a smoother nose. Switch to neck pickup and roll down the volume and tone and there's a beautiful jazz voice.

It's the volume and tone controls (500k ohm CTS pots and .022 microfarad capacitors) that are the key to the guitar. In combination with these pickups they sound so well-matched and hugely versatile.

There's a noticeable 'hump' towards the end of the volumes, so it's easy to achieve a clean/ dirty set-up without touching your amp or barely moving the volume control. Certainly if you only run this guitar full-out you would be missing quite a few tricks.

It doesn't match the hugeness of a great Les Paul, but cranked there's a beautiful musical focus to the resonant and soulful sounds that'll lift you above a dense mix without sounding shrill or thin.

Okay, so not everyone will enjoy the 'radical' offset outline, and the near £500 up-charge for what is a subtly flamed maple top seems steep. But, as an electric guitar that sits perfectly between a Les Paul and a Tele, it's one of the finest we've ever played. Perfectly made, a perfect weight, with a great feel and sounds to die for.