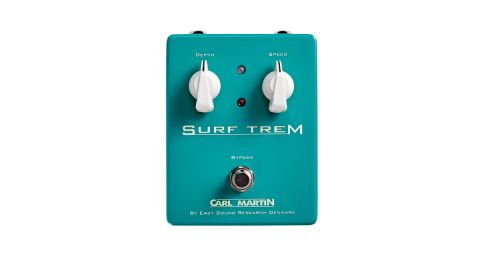 If you're looking for vintage-amp tremolo, simply delivered, this could be your pedal.

Certainly the coolest looking of the pedals collected in this round-up with its surf green chassis and cream chickenhead knobs, the Surf Trem is also the most basic of the pedals on test with just amp-style depth and speed control.

Now, while the Surf Trem - which is part of Denmark-based Carl Martin's Vintage Series - has been around for a few years in a couple of different-shaped enclosures, this particular unit is a newly released revision of the pedal that, alongside the standard red LED on/off indicator, adds a second bright blue LED that pulses in time with the speed of the tremolo, whether bypassed or not, leaving you in no doubt as to the trem speed.

The circuitry of the pedal is taken from the company's TremO'vibe tremolo and vibrato pedal, and offers a rich, warm and rounded tremolo. The sound is reminiscent of Fender-style bias tremolo, and while there's no volume knob, when the effect is kicked in there's no loss of level, instead a distinct boost to give the sound presence.