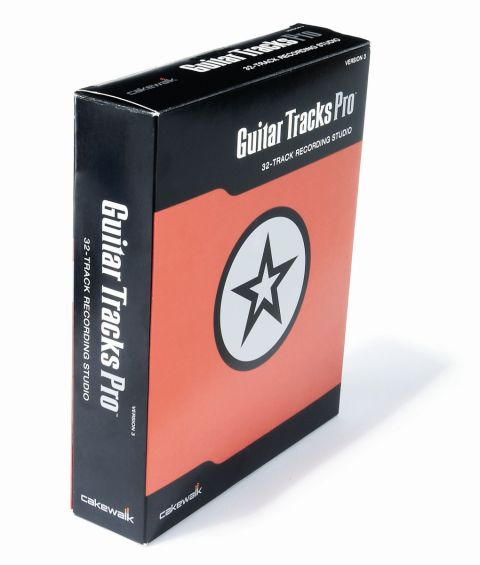 Guitar Tracks Pro 3 is a great place to start if you want to get into computer recording on the PC as it's very intuitive and easy to set up. Within minutes you can be recording and layering multiple guitar tracks.

While it can be argued that the software recording packages (sequencers) that create a home studio in your computer all do pretty much the same thing, choosing the right one can be difficult.

For anyone wanting to dip their toe in the water and get started without too much outlay there are cut-down and less expensive versions from several of the major players (Logic, Cubase and Sonar) that offer general purpose recording.

These may have a set of features over and above those that anyone just wanting to record and arrange guitar would need. However, there is one product from the same stable as Sonar that is specifically designed for guitar players and songwriters.

Cakewalk's Guitar Tracks Pro version 3 has plenty to tempt guitarists down the path of computer recording, notably the inclusion of a version of the AmpliTube amp simulation software and a sub-£50 price tag.

Available for the PC only, Guitar Tracks Pro 3 is a 32-track recording package that does not incorporate any MIDI sequencing facility. That lack of MIDI may preclude one way of building backing tracks but Guitar Tracks Pro supports the use of ACID format audio loops, which can be dragged on to audio tracks and automatically adjusted to the right tempo.

A whole bunch of ready-made bass and drum loops for instant use come bundled with the package.

If you just want a decent timekeeping device at any point rather than a fully fledged backing track there's a built-in metronome. You can record up to 32 tracks of audio and several can be recorded simultaneously if you have a soundcard/audio interface with multiple inputs.

Recorded audio can be edited with all the usual cut, copy and paste moves that allow you to instantly trim audio and move chunks of it around on the screen.

For effects you get AmpliTube LE amp and speaker simulation plus the GT:FX suite which has six different plug-in effects processors that can be used on guitar or on any audio.

Additional plug-in effects can be added to the system as and when required in either DX or VST format, which opens up plenty more possibilities. At mixdown there are plenty of parameters that can be automated by recording any mouse moves or by using a MIDI compatible controller's faders.

Installing Guitar Tracks Pro is easy as there's a set-up wizard that configures the system to suit your soundcard so you're ready to just plug in and play. There are really just two main pages to navigate - the Mix page showing the faders and so on, and the Edit page where you can see the tracks and the audio waveforms - which makes operation very easy with nothing ever more than a mouse click away.

Once you have the guitar sound going into your soundcard/audio interface and have taken advantage of the software tuner you can plug some amp simulation into your recording track. Playing live through AmpliTube presents no latency timing problems as long as you've got a decent quality soundcard and drivers installed.

AmpliTube LE has presets with many familiar sounds based on famous players and songs, but getting in and tweaking them is dead easy - there are plenty of options for dialling in just the right guitar sound for each track.

There are three amps (clean, crunch and lead) to choose from, three speaker cabs and three stomp effects: wah, distortion, delay, plus spring reverb. In addition the

GT:FX suite has plug-ins for phasing, compression, reverb, modulation, delay and EQ. Constructing a rhythm backing-track from audio loops is straightforward enough - the bundled loops from Smart Loops will give you plenty to get started with and there's unlimited scope for importing loops from other sources.

With a backing track or the metronome as a foundation it's a simple matter to move from track to track, record each guitar (or other audio) part and build up a complete song using this neat and versatile software recording package.