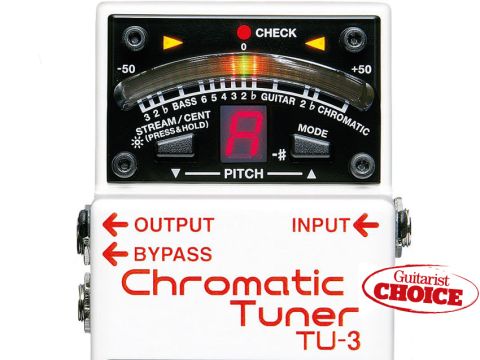 Boss created an industry standard with the TU-2 pedal guitar tuner in 1998 - they're ubiquitous. Over the ensuing 12 years, however, its +/- 3 cent accuracy and limited display drew questions - although we've never had any issues live - as other brands offered better specs. Time for an update…

First and foremost, accuracy of the new TU-3 is quoted at +/-1 cent over a 23-segment LED display, which means it tunes more accurately. Tested against a 10-year-old TU-2 and a TU-12, the TU-3 outperforms its predecessor; unnoticeable in most live situations, but it does mean that the TU-3 is a better companion for adjusting your intonation.

Improved accuracy means landing bang-on in tune is marginally more fiddly live; for example, this reviewer doesn't wait the extra half a second or so for the 'AccuPitch' confirmation display after the single green LED lights up. Other functions include drop tuning up to six semitones and bass tuning up to three flats.

A new high brightness mode means that maximum current draw is up from 55mA (TU-2) to 85mA. Using the recommended BOSS supply and a PCS-20A daisy chain, the TU-3 will also supply a total of 200mA to up to seven other BOSS Compacts.

Boss is resisting true-bypass switching, which may be an issue for the tone-obsessed, but the usual Boss buffered output helps when using long leads and numerous pedals. Also there's no facility for sweetened tunings but the truth of that matter is that only a tiny proportion of players either know or care about them!