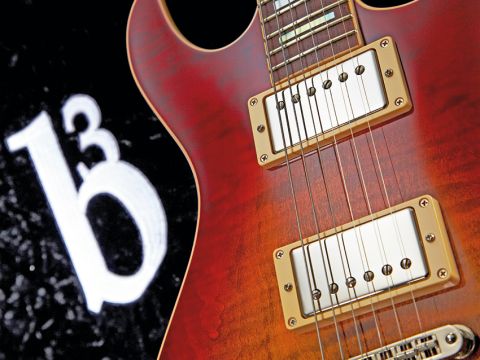 This should be a modern classic design. If you're into single-cut tones but want something a little more comfortable, start your search here.

As far as we're aware, the Premier Builders Guild (PBG) is a unique concept.

Instead of creating just one brand, PBG makes guitars from b3, Koll and Johan Gustavsson, along with designs from Roger Giffin and Dennis Fano's artfully distressed instruments. Until early 2012, Jason Schroeder was a part of the programme too, but his company has now decided to go solo.

"Starting with our test amp in classic rock mode we plug the b3 in… and then spend quite some time gurning and chuckling to ourselves."

"For those builders, it frees them up to work on their custom business, to develop new designs, and they're getting a great master builder in Gene Baker who executes their designs in close contact with each maker," explains PBG's Peter DePasqaule. "So they're on the phone, sending e-mails and pictures back and forth. They come to the workshop to check on production and meet up with Gene.

"Denis Fano is a PBG builder, like Gene Baker, but the other guitar builders license particular lines to PBG, we don't own them." To clarify, Baker's b3 and the Fano brand are owned by PBG along with the Two-Rock and Tone King amplifier companies; the other guitar builders maintain their independence but allow PBG to build versions of some designs.

"It's a more accessible way to order a custom guitar," continues DePasqaule, "it's not a year-and-a-half wait for the guitar from the maker. You're not worried if the builder will still be in business in a year-and-a-half.

"So the idea is to get a builder-associated guitar in a much more reasonable time frame and it'll usually be a little cheaper than if you order it custom, sometimes significantly cheaper." Time to take a closer look…

The PBG's head luthier is Gene Baker and b3 is his brand. But this solidbody Fire guitar will be familiar to boutique fans as it previously appeared under the Baker name - think double-cutaway Les Paul and you'll not be too wide of the mark.

It's no lightweight, with all-mahogany construction, and it's topped with a very classic figured maple cap that's not over flame-y especially in this muted tiger eye finish, with its almost dirty-looking centre. It has a bound top edge and rear belly cut, and is Les Paul in depth at 60mm.

The heel is less classic, it almost looks moulded, but not least thanks to those spacious cutaways - as you'd expect, top fret access is excellent.

One of the numerous custom options is the Buzz Feiten Tuning System and the Fire uses the proper Gibson length of 625.5mm (24.625 inches). The dark brown 'board is edge bound although, unlike Gibson, the Dunlop 6105 frets sit over the binding and we get a meaty but excellent feeling rounded 'C' profile.

The ebony-faced headstock looks modern and small, and we wonder if the combination of its shape, that of the miniaturised reversed outline of the truss rod cover and the gold, pearl-inlaid b3 logo all work together. Mind you, we get straight string pull over the well cut Tusq nut.

There are no surprises on the electronics front: dual-Lollar Imperial humbuckers, individual volumes and a master tone, the latter with a pull/push coil-split. Unlike the wrapover bridges of many of the PBG models here we have Tone Pros' locking two-piece bridge/tailpiece set up to continue the classic LP vibe.

Fit and the nitrocellulose finish is all exemplary, as it should be of course.

Starting with our test amp in classic rock mode we plug the b3 in… and then spend quite some time gurning and chuckling to ourselves. It's a great Les Paul-alike that strapped on feels more like a Strat.

A hugely overlooked design, it might mess with the visuals but, especially for a double-cutaway guitar, it sure does a good impression of a classic single-cut. To our ears it's a lot to do with the mid-range, it just nails that slightly dry, crisper and compressed classic single-cut tonality.

It, perhaps, lacks a little low-end compared to many more modern single-cuts but with it, to our ears at least, sounds a little more vintage-y. Certainly, Free's Mr Big played at volume with gusto had our test studio owner asking if we could turn things down!

Yes, it's weighty but that weight disappears strapped on, it feels - cue gasps of horror - more part of you than a Les Paul and looks bigger.

With the inner coils voiced in the split mode there's a lot of stylistic variation; the added volume control (the upper control is the bridge pickup volume the lower control closest to the stud tailpiece is the neck pickup volume) gives you plenty of scope for dual-pickup tonality, although we'd bet some players would welcome a typical Les Paul-style four-control option. Hard to put down, it put our test schedule into disarray - we couldn't stop playing this one.

This is a very well-made, interesting and original design that's much more available via the PBG unique building concept than direct from the solo luthiers. Baker's b3 Fire is an exceptional modern double-cut that captures the vibe of the Les Paul yet, almost, feels like a Strat.