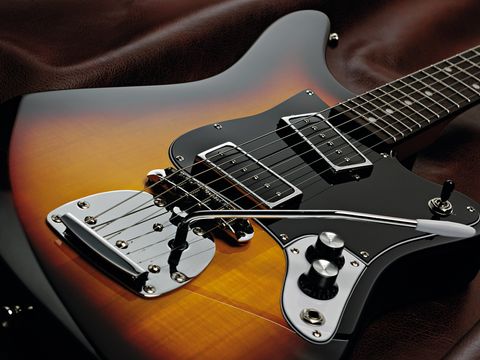 Individual styling combines with a performance that belies the economy-conscious status of this retro revival.

Launched last year, Aria's most recent shallow pocket six-string solid has finally reached these shores. Many makers continue to plunder their personal past and Aria is no exception.

The Retro-1532 emulates an entry-level electric introduced back in 1968, complete with the same quirky styling, but offering an improvement in quality. The original model was called the 1532T and it also appeared under other brand banners, including Commodore in the UK and Luxor over in Germany.

However, it's now back- angled as opposed to being flat, which eliminates the need for any friction-inducing string- guides, while the contemporary style tuners are another, very welcome, improvement.

The 1532T's neck was a somewhat chunky affair, often made of low-grade mahogany. Its successor is maple and much more user-friendly, courtesy of a modern 'C'-profile. As before, the lightly radiused fingerboard is rosewood and boasts 21 frets, but again build quality is better, offering excellent playability over the Gibson-style 629mm (24.75-inch) scale length.

Like the neck, the 1532T's body reflected its low price, being slim depth and usually plywood, with the sunburst finish suitably shaded to mask the joins revealed by a very generous front forearm chamfer.

The mutated Jazzmaster styling has been retained for the revamp, complete with the distinctive, decidedly offset, lower bouts. But the new version employs alder in significantly thicker quantities, contouring is more restrained and the high-gloss, three-tone sunburst colour scheme no longer has to camouflage its construction.

The two-piece split scratchplate stays the same, with a black main section supporting the two pickups and three-way selector switch, while a separate small panel in contrasting white plastic carries the output jack plus master volume and tone controls. The latter are now topped with Gibson-style knobs that seem oversized for their quite cramped quarters.

Pickups are more of a major departure from the past, being humbucker-sized P-90-style single-coils clad in open-topped chrome covers, but as before, the neck unit is angled. The bridge is now a direct copy of Fender's Jazzmaster/ Jaguar twin-pillar type, complete with screw thread- style saddles.

The 'T for Tremolo' model suffix has been dropped, but the new 1532 still comes with a vibrato unit sited just behind the bridge. In 1968 it was either a generic Japanese design or an equivalent very similar to Fender's flush-fitting, single-spring tailpiece used on the Jazzmaster and Jaguar.

Again this component has been updated to a very close crib of the latter and the push-in arm is equally long. However, on this example at least, its shaping is different to the Fender version and the absence of any side angle makes operation somewhat awkward.

Overall action has the smooth and lazy feel typical of this type of tailpiece, with a fair amount of leverage required to drop pitch by a semitone, but tuning stays comfortingly stable.

Construction and components contribute to a nasal-ish and sprangy acoustic response that's very Jaguar-like. The pickups are much meatier than the original Aria's somewhat microphonic and thin-sounding single-coils.

Performance is in keeping with the P-90-style design, as the neck position provides plenty of grunt and woody fluidity, while the bridge selection supplies a gritty attacking alternative that's equally useful. Engaging both offers a noise-free humbucking option: ideal for deep-toned, surf-orientated sounds.

The presence of these pickups means the Retro-1532 also likes to play dirty and can be more of a mean and nasty thrash hoodlum than its old-style oddball image might suggest.

Aria says that the original 1532T "created a sensation" when it appeared and "quickly became a favourite". But in the UK it actually wasn't too popular, despite selling for a measly £28!

However, this comparatively priced update deserves to do better, although the unusual styling might still put people off. Aria has improved on the original without losing its 'bizarre on a budget' appeal and, in this case, old certainly isn't best.

The Retro-1532 warrants attention from any player interested in looking beyond the obvious without paying very much for the privilege.