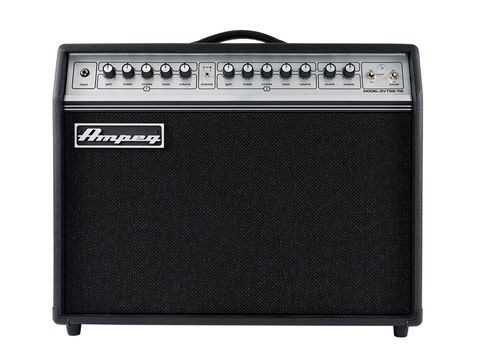 A mid-priced do-it-all valve combo that offers something different from Marshall and Fender.

Ampeg is almost as well known for its B-15 and SVT bass amps as Gibson is for the Les Paul. They're permanent fixtures on pro stages all over the world, and have featured on countless gold and platinum recordings.

One of the world's great amplification brands, Ampeg's history goes back to the end of WWII and Everett Hull's patent for a device to amplify violin-type instruments, called an 'amplified peg'. Synonymous with bass amplification ever since, Ampeg was also making guitar amps as far back as the beginning of rock 'n' roll, with futuristic names such as the Reverberocket, Jet and Gemini.

Decent build quality and reliability ensured Ampeg's popularity across the USA and its vintage amps from the late '60s and early '70s have many enthusiasts today.

Recently Ampeg re-entered the guitar market after a long absence with a new collection of amps called the GVT range, designed in the USA and made offshore in Korea. Here, we're looking at the twin-channel GVT52 in 1 x 12 combo format.

The GVT52 is a smart, well-proportioned combo and, from the outside, appears built to the kind of standard you'd expect from a product bearing the Ampeg badge. The deep silver control panel, with its pointer knobs and understated black graphics, takes inspiration from late '60s Geminis and early '70s V-series amps.

Everything is very neatly finished, with expertly fitted smart black vinyl and a black sparkle grille cloth adding to the GVT's retro vibe. Inside the deep steel chassis the electronics are - as you'd expect - all mounted on printed circuit boards, with one main board holding all the valve bases and a smaller strip directly behind the control panel.

The board quality is high, with through-plating, and most of the connections made with robust-looking spade connectors. The filament supply appears to be DC rather than AC, which should help to reduce noise when used at higher gain levels.

Overall, the GVT appears well made and certainly capable of taking the knocks of live gigging in its stride.

The GVT52 is a proper two-channel design, with two sets of gain, master volume and tone controls separated by a small toggle switch with red and green LEDs to show which channel is active. There's also a global master volume and reverb level control.

On the rear panel, there are sockets for 4-, 8- and 16-ohm loudspeaker cabinets, as well as a pair of send/returns for the GVT's fixed-level series effects loop.

Two more jacks connect to the GVT's footswitches; one two-button switch is supplied, which changes channels and toggles a boost function that can't be operated from the control panel. You can use a second footswitch to control the amp's reverb and effects loop, both of which are on by default.

The GVT uses Ampeg's traditional Baxandall tone circuit, which can both boost and cut frequencies - it's different to that found on most guitar amps, and more common on hi-fi equipment. The dual-colour mains/standby LED is a neat feature, as is the useful half-power option that drops the output to around 25 watts.

The GVT52 is mostly free of noise when activated, with just a little hiss at higher gain levels - the DC filament supply does its job of keeping induced hum at bay.

Using a Strat fitted with Duncan Alnico Pro II pickups and a stock Les Paul Standard, the clean channel provides a wide range of tones that suits both instruments. Despite the absence of a bright switch, there's plenty of scope to add bite to mid-biased humbuckers or smooth out wayward single-coils.

The tone controls are more powerful than on many similar amps, and some careful tweaking is needed to draw the best from the GVT.

Channel one has enough variety to manage the warmth of jazz as well as the bite and twang of country. Out-and-out clean headroom isn't huge, however, not up there with a Fender Hot Rod Deluxe, for example.

Channel two ups the gain considerably even when using the relatively low-output single-coils on our Strat. Plug in a Les Paul and turn up the wick and you can get more than enough drive and sustain for any style, but particularly good are the '70s rock sounds complete with all the crunch and sizzle you could ask for.

Making the tone controls work with the appropriate drive setting is tricky though - it's all-too-easy to overcook; bass and mid-range in particular need to be handled with care. In fact we're not totally convinced by the Baxandall tone circuit, even if it is the traditional Ampeg way of doing things.

You could argue that there's too much flexibility, making it more time-consuming to dial in sounds, and frustrating when you can't recapture the great tone you had from last night. Classic hi-fi Baxandalls usually have just two controls for treble and bass and we think the addition of a mid knob overcomplicates things, although it's definitely needed on the GVT.

We'd be happy with less tonal range. Nevertheless - and back to the sounds - you can dial in some top tones that work well for the heavier end of Texas blues; think Buddy Whittington or Billy Gibbons.

The footswitchable boost pushes things to maximum with more gain and more presence for full-on metal tones if you want to scoop out all the mids, or indeed a decidely honky, Schenker-approved howl if you boost them. That said, more gain on the clean channel in boost mode would have helped help fill in the gap between the really clean stuff the GVT does well and the heavy drives.

It would also be preferable if the boost and effects loop were switchable from the control panel; there are occasions where a footswitch and yards of trailing cable aren't welcome.

Overall, the GVT is a good, serviceable guitar amp that will cope with a wide variety of gigs and should find favour with many players. Thanks to Korean manufacturing, the price is reasonable, and the build quality is better than some of the competition.

Many amps have a good basic sound and just enough range on the tone controls for fine-tuning, consequently they sound fine wherever you point the controls. Others give you so much range it's harder to pull the good stuff out of the barrel, and for us the GVT falls into the latter category.

That's not to say it can't produce great sounds - they're definitely in there - just they're not so easy to access and replicate on a consistent basis.

Nevertheless, it's a credible return to the six-string world for Ampeg and more importantly, it is very different from the Fender, Marshall and Blackstar amps that dominate this price point. For that reason alone, you absolutely must try one.