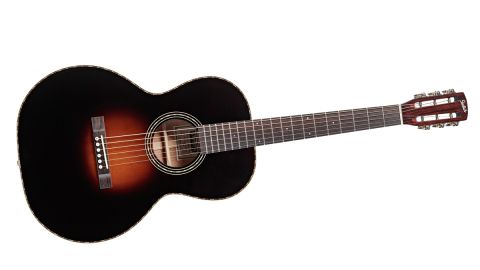 A small but mighty guitar that would be great for those in search of a bluesy vintage.

Whoever was the first person to reassuringly state that size doesn’t matter could have been talking about acoustic guitars.

Bigger doesn’t mean better, though it can often mean louder and boomier. With that in mind, you might be surprised by what you’re drawn to when trying acoustics out. Especially if you’re coming from the world of dreadnoughts, which is varied enough in itself.

Gretsch is offering three models that are both alternative in aesthetic and sound with its Roots Collection. After the Single-0 ‘Parlor’ and Double-0 ‘Grand Concert’, this G9521 Style 2 Auditorium Triple-0 is the middle model in price.

Does this homage to early 20th-century acoustic craft have the charms to tempt us to strum on its porch of possibilities?

It’s certainly a looker. We like the Appalachia Cloudburst in practice as much as we do in name. It’s not your usual ’burst - a subtler take on the teardrop style that can look a little too conspicuous if the contrast is too much - but here Gretsch has brewed up the right kind of storm. With a wise choice of a satin neck rather than the gloss elsewhere, some messy glue work at the heel lets the side down a bit. But after rubbing the residue away, it’s time to find out the state of play.

Those used to dreadnoughts and jumbos may well be startled by how shallow the 000 body is here towards the front. Combined with the neck joining the body at the 12th fret, this is physically a different playing experience. The lower frets are brought closer to the hand, and your torso is closer to the shallower body. It’s a more intimate experience, and that reflects in the tone.

If you’re looking for lush orchestral resonance, you’ve come to the wrong saloon, cowboy. But the triple-0 shape has never been the platform for that. It’s a pokier, drier sound and high notes fade faster, but there’s a real rootsy character here for picking notes.

The bottom-end presence has some roundness to add to the mix, too, and - coupled with a wider string spacing at just under 60mm - offers definition for fingerstyle that brings a raw Americana tonality to skin-on-string playing. The acoustic bluesers should enjoy getting to grips with this, too.

This clearly isn’t an all-rounder, but if you’re looking for a bluesier vintage, it could be an inspiring addition. For vocalists, there’s something in the plucky character of this guitar that could feel good for solo players with an emphasis on picking. And that’s the key to trying new shapes outside your usual inclinations: you might not know what’s right for you until you find it.